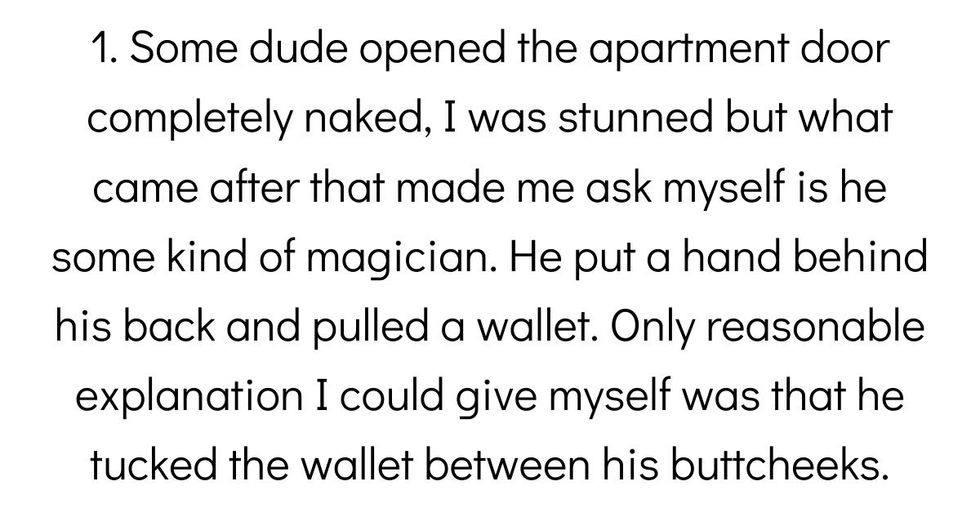 Food delivery people are the true MVPs. Through rain or shine, they're always there to make sure that your food gets to you quickly. At the same time, not every delivery goes perfectly. Here are some of the weirdest things pizza delivery guys have seen while working.

I deliver for Doordash and Grubhub, sometimes pizzas. One time I picked up an order from each app, same exact order, from the same restaurant, both named James, to the same hotel.

When I knocked on the door two guys were there and asked me which was I, Doordash or Grubhub. I told them I was both and have both orders. They started to laugh really hard.

When I asked what was so funny, they told me they had a bet on which one would come first. They thought it was going to be 2 different drivers and never thought one person would be using both apps. I laughed too and asked them which one was James. They told me they are both named James. I still wonder what other funny things those two guys try come up with.

Customer paid with a card and he had instructions to leave the pizza on a bench in a public area. Drop it off and quickly leave the area. I left but pulled on a side street where I could see the bench. I wait probably close to 5 minutes and then I see a man bust out of a dilapidated building I thought was empty.

He runs up and grabs the pizza, he spins a whole 360 degrees and he is glancing in every direction as if he was afraid he was being watched. Then he hurries back to the place and when he gets to the door he sees me and his eyes get huge and wide, paranoid and fearful. He slammed the door shut. I just think he was tweaking or something wouldn't be out of the ordinary around here.

That's me eating pizza while on a diet.

Was delivering to a hotel, had a guy pass out on me 3 separate times in a 10 minute encounter. Apparently he was narcoleptic, but it still scared that crap out me.

Narcoleptic here. He was probably having a cataplexy attack. We don't actually pass out, we're still conscious but we lose control over our muscles so we look passed out. Theres also the scenario where it's only partial, then it looks like a seizure because we try to move only to cause spasms. Its triggered by emotion so he probably got nervous or something.

I delivered to a hotel in the middle of a local golf course. Called the number to let them know I was there and was told to come on up. Get to the room and when the guy answered, there was a large group of guys, all in golf attire, surrounding a single guy in a chair. He was bound & blindfolded. The one that answered didn't even bat an eye, just asked how much and tipped me $30 bucks. Warily I took the money and walked away, but before the door was fully closed, I heard one on the guys ask "I wonder if he knows this is a.."

Before I even left the parking lot, the guy that answered the door called me to say that the bound guy was his brother and he was bound & blindfolded because it's his bachelor party and the stripper was waiting to come out. I just showed up way earlier than they thought I would.

Some dude opened the apartment door completely naked, I was stunned but what came after that made me ask myself is he some kind of f*cking magician. He put a hand behind his back and pulled a wallet. Only reasonable explanation I could give myself was that he tucked the wallet between his buttcheeks.

Sure it wasn't the Village People?

Just simply coming up and there were 3 guys in underwear waiting for me. Handing the pizzas over and more just start coming out in underwear and these were also wearing cowboy hats and Native headdresses, some kind of Bro Halloween party or something. Got to grab my tip out of the dudes bra. It was funny as hell but when I left the building I had to process for a moment what the hell happened.

I had two teenage girls open the door in their underwear, as a joke I guess. They think it's funny but I had to report it to my manager and hope nothing came of it.

Just the other day showed up to a house to be greeted by two guys (about 25) on the roof in underwear clearly ecstatic about the pizza being delivered.

Did you Walter White the pizza up there?

Had someone answer the door once with a snake on his shoulders. Not like a milk snake or a garter but a ball python. Probably about 6 feet long. As he closed the door I heard him say to someone that I hadn't reacted at all lol. Sounded so disappointed.

Edit to clarify: this was almost a year ago. I am not a snake expert to so it is quite possible I misidentified the species. Thanks to those who pointed out my mistake.

At least there's a happy ending.

I delivered a pizza to a young girl who was home alone and when she opened the door her dog immediately ran away. I handed her the pizza, got in my car, found the dog and returned it. She left me no tip so I was feeling kind of salty about it on the way back to the restaurant.

A few hours later her Mother called the store asking to speak to me. She thanked me and explained they had left tip money but their daughter was so upset about the dog she forgot to give it to me.

I worked at this pizza place for two more years through college and they would get two large pepperoni pizzas and request me to deliver it every week after that. They always tipped me at least $25.