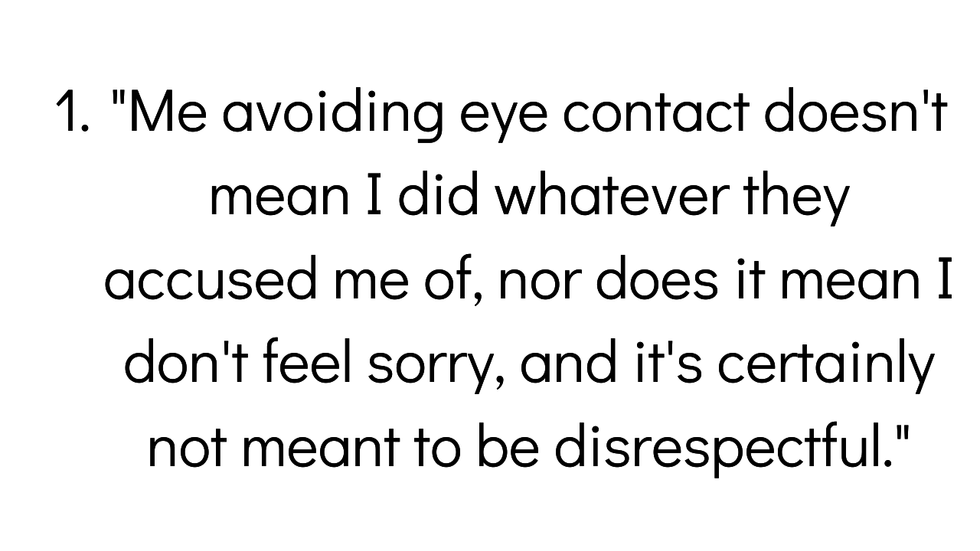 Autism, along with other neurological disorders, are often characterized as something they're not. It can be hard to explain to a neurotypical person, but all it takes is a willingness to learn. Here are some of the things that people with autism wish others would understand.

u/theBrD1 asked: [Serious] Autistic people of Reddit, what do you wish more people knew about Autism?

Something I wish my teachers knew when I was growing up; me avoiding eye contact doesn't mean I did whatever they accused me of, nor does it mean I don't feel sorry, and it's certainly not meant to be disrespectful. It's just that I don't do well with eye contact.

Also; I know my social skills aren't the best, and I do try to work on them. But not telling me when I do something wrong and thinking the mere fact you're upset with me should lead me to realize what I did wrong and how to do it better instead of just telling me isn't f*cking helping.

Things can be overwhelming.

Just because I can act "normal" a lot of the time does not mean that my autism doesn't affect me. The majority of my time spent with others is literally an act, and it's extremely mentally exhausting and emotionally draining to the point that I have frequent meltdowns when I'm finally alone and able to be myself again. This world wasn't made for me or people like me. When I work in customer service my bosses think I'm the perfect employee. I'm genuinely nice, always doing my best, a quick worker... They don't realize I had multiple panic attacks before work and that when I get off I'm so drained I go home and cry. It's so hard to keep up the act of being a "normal" human to the point that I don't know how much longer I can do this.

I just wanna say I really did not expect this amount of replies to my comment, and reading all of them has helped me realize I'm not alone in this. I was under the impression I probably wouldn't do well anywhere, but I'm going to look into some of these other jobs that people recommend and hopefully I can get my life back.

I wish people knew that not everyone with autism 'seems autistic' but that doesn't mean they don't struggle or don't have autism. Blending in, even though it may seem beneficial, just makes it worse for me because when you don't seem like you're struggling it's harder to get help, and when you do an 'autistic thing' people might think you're a freak.

Adults have autism too. Seemingly all services for autism are for children. It's ridiculously difficult for me to get and keep a job because of it, among other things, and that fact is usually overlooked.

Every case is different, you can't just assume it's the same with every person. It feel like everyone thinks people like us are just all socially awkward, but it can be a lot more then that

For example I have quite mild Aspergers syndrome and to most people I seem like everyone else, but I've met people with more severe cases that can't even speak and need constant help. Never assume every person with autism is the same.

To not be seen as lesser.

I wish more people understood how terrified I (and possibly others) are that it will bar us from jobs, opportunities and relationships - a normal life - because other people see us as lesser, as difficult/not worth managing or as broken. I feel like things are often harder just because people view me that way; it perpetuates itself.

We don't "look autistic." And telling us that is not a compliment.

"But, you're too pretty to be autistic" Yeah mate and you're too douchey to be around me.

A lot of people with autism show no outward signs of it. One of your friends, coworkers etc. could be autistic and you'd never notice anything strange about them. Maybe they're a bit shy or awkward in certain settings (in my case group conversations), but nothing major.

For those people autism isn't necessarily a disability. As such, there would be no reason to treat them any differently than others even when you do find out they are on the spectrum. As a general rule of thumb, don't assume anything about an autistic person. Find out what they're like and respond appropriately, don't assume they have the same strengths/struggles as your autistic nephew or an autistic celebrity or whatever

Edit: I should probably clarify that I am only speaking for a specific group within the community here; people who don't want or need special treatment (be it from friends or people with authority) just because they have autism. As an autistic person, that's how I feel. But there are also a lot of people with autism who depend on special treatment and couldn't survive without it, especially people with low functioning autism. It's a very broad spectrum. I never meant to imply that autism as a whole is not a disability.

Personally I think low functioning autism should be its own separate disorder with its own name, because it would avoid this kind of confusion, but that's a whole other discussion.

I wish people knew how much different autism is on girls.

Researches on this topic are just beginning to be made. I'm not from the US, and in my country there isn't any research being done nor available in our language (so far I've only found resources in English), so there is A LOT of misinformation even between psychologists and other professionals.

Autistic kids grow into autistic adults. Just because we get better at not showing our autism doesn't mean we've "grown out of it", as many people think. It just means we've been forced to hide part of ourselves to fit in and oftentimes it comes at the cost of being able to fulfill all of our needs, or hell, even just being ourselves.

The Aspergian is a really great website written by aspies and other neurodivergent folk for aspies and other types of NDness. They have a lot of stuff relating to issues dealt with when you're on the spectrum as an adult in regards to symptoms, interaction, relationships, etc. And they also promote autistic artists as well. And Special Books By Special Kids is a really good channel with interviews with people of all abilities, including things like autism, ADHD, etc, as well as physical stuff too. It's a pretty great way to learn more about other people and how they want to be treated. As well as how they live their lives.