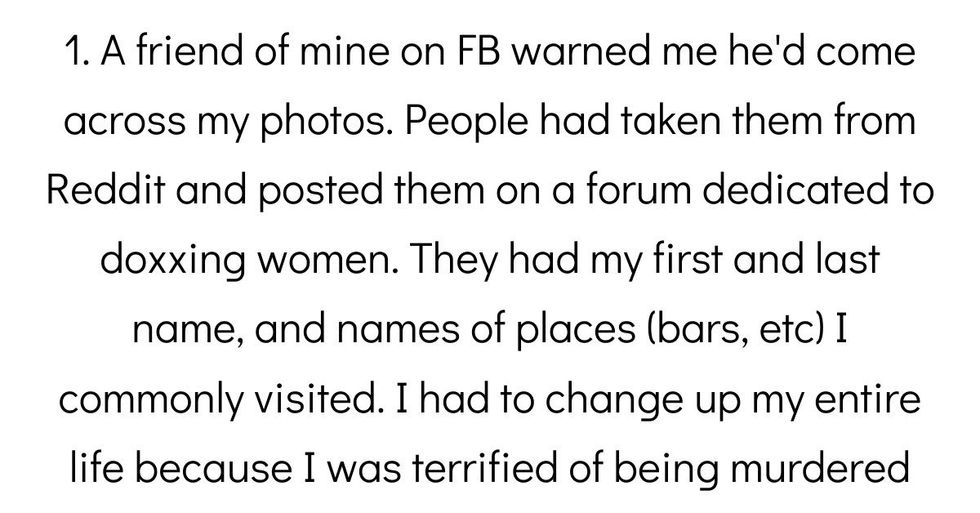 There are definitely some negative consequences when it comes to posting NSFW pictures online. True, you can do what you want- I don't judge, I was a burlesque dancer myself. But it's important to know the safety concerns, like having your "fans" approach you. Here are some of those stories. Post with caution!

u/Adrous asked: People who post NSFW pics on Reddit, have you even been approached by a "fan", if so how did it go?

I had always really struggled with body image stuff and didn't want anyone to look at me for the most part. I found this app called "Mobli" which was essentially Instagram for d*ck pics. I had lost a few pounds and decided to take a leap into the deep end and post a few things since I got to control who could see my "private" pics through a request/accept system. One was a photo of me in my underwear.

Someone apparently stole that and posted it on tumblr. I'm kind of a stocky/fat hairy guy with a beard so I never imagined that happening but I met someone at a party weeks later that recognized me from it. He told me he saw me there and I felt sick.

I asked him if he remembered where so he found the post and sent a link and there I was - face and all with the camera situated to put my junk all in the viewer's face. It had been reblogged like 700 times already including by some magazines specific to guys like me apparently.

Years back, there was a exotic dancer in town that I recognized from a Lil Wayne video. She was actually surprised that I knew that. Nice girl, hope she's doing well.

I happened to meet someone who showed me a list of his four favorite NSFW tumblr blogs he followed. Mine was on the list. I am not sure if he actually recognized it was mine and I didn't reveal the fact on my own.

I used to post NSFW pics on tumblr, about a year after I deleted it some girls at work found the pictures and sent them to everyone at my work. I had to have a very awkward conversation with my manager.

To answer a couple of questions, the girls did get a talking to and had their probationary period extended but nothing really came of it. My manager spoke to me about it but I didn't get in trouble. I think the main reason she did was because she found out before I did and she thought I should know. The pictures had been reposted on other sites etc so I'm assuming they found them on one of those. Didn't really feel like asking them where they found them.

I used to sell my underwear, socks and stuff online during my college years. I hardly ever met with clients but met this guy, let's call him Jim, a couple of times in a coffee shop to hand him the package because we lived in the same city. Super quick transaction - hi, thanks, have a good one. All was fine. Happened maybe 3-4 times. Always the same order.

Fast forward to a couple years later, I was invited to a job interview. Got there, met the CEO and we talked for a bit. Everything went great. I met a couple of other people and everyone seemed utterly lovely. At the end of the interview, CEO tells me to wait a bit because he wants me to meet the head of my future department. Well, Jim walks in. I probably wouldn't have recognised him if he hadn't acted all weird and pretty much fled the room after like 30 seconds of awkward starring. I got a call later from him today, he apologised and said that he was looking forward to working with me. I ended up taking another offer. Still get texts from him from time to time asking if I'd still sell him stuff though. So, yeah, that was fun.

Put a bag on your head.

There was a girl at my school, who had a video that her boyfriend recorded of them having sex go pretty viral on tumblr, everyone knew then, but the couple didn't really seem to care.

Fast forward to now, I sh*t you not I still see this video if I browse, not even looking it's just all over, she has had to make a post about dudes from our school hitting her up either trying to blackmail, or just sleep her because they assume she's easy?

Moral of the story, put a bag on your head.

I posted a gif of my round man butt jiggling on Reddit about 8 years ago.

A friend from high school, who I knew of but didn't know, DM'd me on Facebook letting me know that there was a website dedicated to identifying GW girls. They had most of my pictures, my full name, my hometown, state, and college.

That was like 5 years ago and I haven't posted to GW since.

Hijacking this comment for a PSA to anyone who posts anything NSFW on Reddit, even text stories: there are multiple websites out there that use automated bots to scrape content posted to Reddit and store / display it offsite, and often that includes attempts to dox the poster behind the content.

The takeaway here is that once you submit any NSFW content to a public site like Reddit, it's no longer under your control. You can delete the posts, take down the pics, even delete your account and that content will persist forever on other websites.

That's so messed up.

I used to post maybe 5 or 6 years ago. A friend of mine on Facebook warned me he'd come across my photos on a separate forum. People had taken them from reddit and posted them on a forum dedicated to doxxing women. They had my first and last name, and names of places (bars, etc) I commonly visited.

I had to change up my entire life because I was terrified of being murdered or assaults.

Edit: I edited this into a comment further down but adding here to dissuade the crazy theories. I went back to look at the Facebook message, it's been five years so I didn't remember details. He knew about it because they were extorting his sister for $500 to take down her photos. So he was looking in the (our area) thread to see if he recognized anyone else to warn. It has been taken down.

It was kinda cute. I was at a coffee shop and she approached me, asking about the book I was reading. I could tell something else was on her mind. I expected some pyramid scheme pitch, but she casually asked if I posted on reddit and if I was the username I used at the time.

It threw me off guard, like my real life hit with this anonymous world, but she turned out to be super nice and we ended up dating for a few months. I think she had an abnormal amount of self confidence and most people wouldn't approach.

Not exactly what is being asked and not my own experience.

But the opening scene for Wolf of Wall Street when Leonardo rips a line off of a woman's a** — she went to the same little college as I did. I didn't know her very well, as she was a couple years older.

On campus, those that ran in her circle knew and were supportive, and contrary to what might be expected, there were no creepy stalkers or whatever and it was largely accepted as a kinda neat fun fact about her.

And apparently DiCaprio is a delight.

What a strange first date.

Not this, but I was once set up on a blind date with a "fan" from FetLife. I didn't know until he called me by my username and asked if I'd do things from my profile with him. There definitely wasn't a second date.

Not on Reddit but I used to be a cam girl. An older man in Walmart approached me saying he loved my videos and was very sad when I announced I wouldn't be doing them anymore. He saw my daughter (who was three months old at the time) and said "oh you got pregnant. You could have made a lot of money doing pregnant vids. I would have loved to watch you grow".

It freaked me out a bit, and my daughter and I left the store immediately. This is one of 3 people I've run into and he was the most polite, which is sad.

I was a nude model in my younger years and posted some work on DeviantArt. Some of them ended up on 4chan and eventually the link to my portfolio got sent around at work in a very male dominated field. A lot of people liked to have opinions about me because they saw me naked, but had never actually spoken a single word to me in their life.

Lots of sexual harassment and unwanted attention came of it, but I still don't regret doing it. It was all very classy stuff and I'm proud of my body of work.

Thrift stores are the best places to flirt.

I had a guy recognize me in a Goodwill once. But he didn't come up to me, he messaged me a day later to tell me he had seen me but was too scared to say anything to me. We chatted for a while but never met up and it eventually fizzled out.