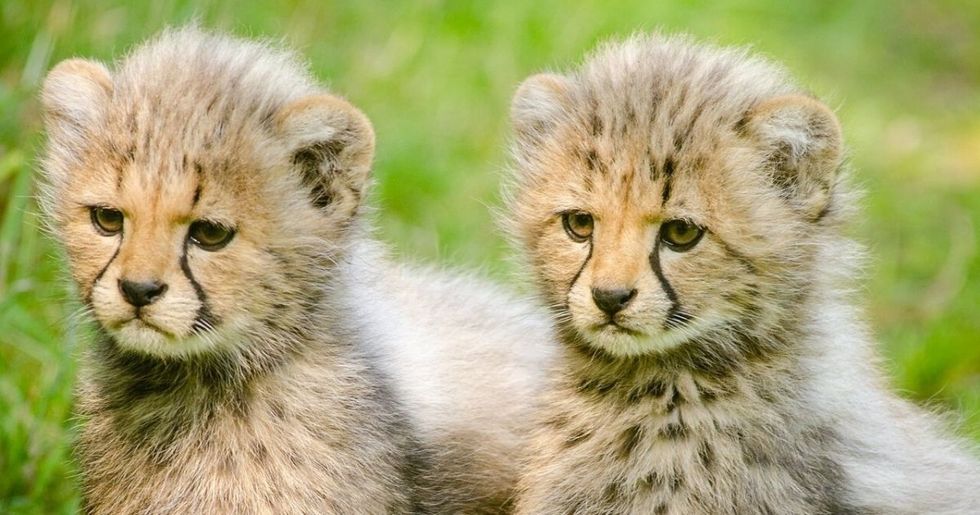 People Share The Most Wholesome Facts They've Ever Learned

Cheetahs naturally have low self-confidence so facilities that rescue, rehabilitate or house them often have to come up with solutions to help them feel good about themselves. One of the most effective? Getting the cheetah an emotional support dog.

According to the animal training people at San Diego Zoo,

"Cheetahs are quite shy instinctively, and you can't breed that out of them. When you pair them with a dog, the cheetah looks to the dog for cues and learns to model their behavior. It's about getting them to read that calm, happy-go-lucky vibe from the dog."

So zoos and rescue/rehab facilities are out there adopting dogs to bring home to the cheetahs, not as snacks, but just to be homies. It's adorable fluffy wholesomeness that looks like this.

With the whole world feeling like a dumpster fire lately, Reddit figures we could all use a reminder that some things are still wholesome goodness.

And the possibility of cheetah/pupper buddy-cop films isn't even the best of it! Kick back, relax, and enjoy the adorable.

The last time Lichtenstein went to war they sent out 80 men and returned with 81 because the soldiers made a friend.

The first time I thought about how good of a friendship it would have had to be to literally change countries and join the other guys army.

In Germany, they have these "frog fences". These fences keep the frogs from crossing the roads and getting run over. At the end of the day somebody comes by and gathers the frogs and helps them cross the road.

A train station in Japan had plans to close but noticed there was still one person who used it - a student. They decided to leave the train station open for her and close when she graduates from high school.

The Netherlands sends Canada 20,000 tulip bulbs every year to thank them for their help during WWII.

This is probably one of my favourite feel good facts. Not only did Canada liberate the Netherlands but when the royal family was being hosted in Canada during exile, the government declared the maternity ward extraterritorial so that princess Margaret's citizenship would be solely Dutch when she was born on Canadian soil. <sniffle>

You know when babies are smiling and laughing, but then they suddenly turn away? They're having a happiness overload! Basically their brains can't handle all the excitement they're experiencing by what they see, so the only remedy is to just not look anymore.

The fact that libraries exist at all is the most wholesome fact I know.

There's a place in your town, probably in a nice building or on a bit of prime real estate, that is given over to the idea of providing as much entertainment or education as you could possibly want, free at the point of use, paid for by the people and for the people as a collective space for the enjoyment of everyone, rich or poor. Pretty much every country in the world has them. The only thing you need in order to be able to make use of this service is to bring the items back in a timely manner so other people can enjoy them -- and people actually do it!

Libraries are as close to the definition of a public good in every sense of the word as I can possibly find.

In New Zealand, if you need to call the Emergency Services you can just ring the number you would use in your own country and you will get through... 911/111/999... it is so that in a situation when you are panicking, you don't need to remember a new number to get help.

Most sharks only bite people because they don't have hands and are just curious. So instead of "Rawr I'm gonna eat you!" it's a lot more like:

"G'day mate how are you doing? Just going to give you a nibble to say hi. Oh my god your bloody arm came off! My bad. Ooo that looks bad, are you ok? You know what I'm just going to leave... Ok so I circled around a bit and seems you haven't made it far. That's a lot of blood mate. Here I'll try to give you a boost. Let me just grab that thrashing leg. Oh come on it's bleeding now, too. Sht. You know what? I'm done with you bleeding all over my house, I'm just going to eat you to clean this mess up. Nothing against you."

In this era of evil corporate overlords let's remember Saran Wrap. Have you noticed that Saran Wrap kinda sucks these days? It seems like it barely sticks like it used to and doesn't preserve food as long. You might think this was due to cost cutting measures to line investor and executive pockets, that's the usual reason products go to crap.

The actual reason is that the key chemical used in its manufacture was determined to be bad environmentally. They were unable to find a replacement that provided the same performance. There were no regulations requiring them to change the formula and changing it would surely hurt their market share. They did it anyway without any fanfare and it was a big hit to their bottom line, but they stuck to it because it was the right thing to do.-

People in long-term relationships (whether romantic, friendly or professional) subconsciously form a macroorganism together. Your brains work together to determine each other's strengths and assign tasks accordingly to become a more efficient and tightly bonded functioning unit, where your skills are maximized and you can save effort on the stuff your partner kicks ass at. You share a joint superbrain 🧠❤

Fight To The Death

Your body's immune system will fight to the death for you no matter what you do. You can smoke,drink and do drugs but your immune system will keep up with all of that without complaint. I like to think that whenever I feel no one likes me.

We're Puppies To Them

The brain of an elephant reacts the same way to seeing a human as a human brain does to seeing a puppy.

The 'War' of Hans Island.

You know that thing dogs do sometimes when you're petting them and they uncoordinatedly smack their paws on you?

They do that because they are trying to return the affection you are giving them! They know you show love by petting them, and they want to make sure you know they feel the same.

Essentially it's their way of petting you back!

There is a tribute sculpture of silver feathers in County Cork, Ireland called "Kindred Spirits".

It commemorates the 1847 donation of $170 (about $4,700 in 2019 dollars) by the Native American Choctaw People to Irish famine relief during the Great Hunger, despite the Choctaw themselves living in hardship and poverty and having recently endured the Trail of Tears.

I love this fact because I'm from Cork in Ireland ☘

There is solid evidence of early hominins taking care of their disabled, injured and elderly as early as 1.8m-ish years ago.

We knew to take care of each other long before we could even walk upright.

Do you have something to confess to George? Text "Secrets" or "