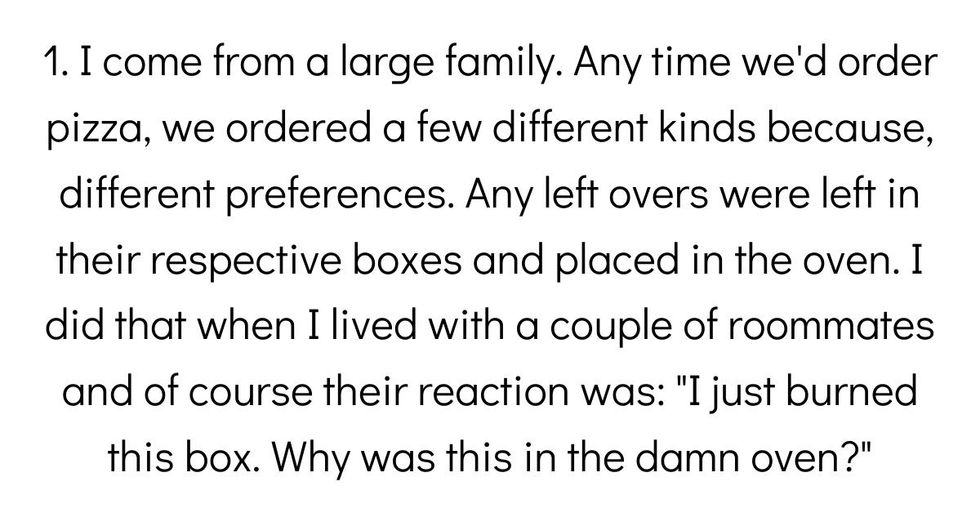 People Share The Weirdest 'House Rules' They Had Growing Up

Rules are an imperative part of life, especially when we're growing up. Kids without rules is a recipe for disaster. Now when you're older, sure, rule are made to be broken. But first you have to learn the rules in order to smash them. Often many of us are saddled with some strict family guidelines. But we survived. Well, most of us.

Redditor u/ctsom wanted to hear from everyone about rules of their past by asking..... What was a house rule you had as a kid that you thought was completely normal until you grew up and realized not all households followed?

If you ever ran out of toilet paper whilst on the toilet, you had to sing the "Stranded" song or else no one else in the house would bring you a roll. kteabrown

My parents would check my and my brother's teeth for "sugar bugs" every night after we brushed our teeth, before we got in bed. If they thought we were trying to skip brushing our teeth they would tell us they could see the sugar bugs in our teeth and would make us go brush again.

My brother and I were so convinced these sugar bugs were real we would constantly ask when we'd be able to see them, my parents always told us only people 13 and older could see them, but by the time we got to be 13 we had completely forgotten about the sugar bugs in our teeth.

I love thinking about creative parenting tactics like this, I've even used that one while babysitting a fussy kid who doesn't want to brush their teeth/get ready for bed and it helps a lot. batman1227

My mom freaks out about hearing commercials on TV. The second it goes to commercial break it has to be muted. She also mutes it if she thinks it's about to go to commercial, even though sometimes she's wrong. And she doesn't really pay attention, so she doesn't notice a lot of the time when the commercials are over so she leaves it on mute when the show is back on. It's very difficult to watch TV with her. code_name_jellyfish

My mum used to pay me to be my own babysitter between the ages of 10-14 or so. The rule was that as long as I didn't make a mess and I'd put myself to bed by the time she got home then I got $10 in the morning. anxiousjellybean

My parents did this!

Only I have two younger brothers, and the rule was that we would ALL get paid, but only if we got along and didn't burn the place down.

It was very effective... Even if we fought while they were away, we'd all be on our best behavior by the time they got back. Didn't want to miss out on that payday. :D tomkel5

If you couldn't find something, and you asked someone for help (sibling or parent) and they found it for you, they got to punch you in the arm. dahaoab

Oh yes, we had that one:

Me: Muuuum, where's the whatever?

Mum: If I find it first, I get to smack you.

I had to wash the dishes every night, even if I wasn't home for the meal. There were times I'd get home from an away basketball game (I was in the team) after 10pm and the dishes had sat since they finished reading around 6:30pm.

My older brother's nightly chore? Take out the garbage.

He'd be done in 2 minutes. I'd have 30+ minutes of washing, drying, putting away, and cleaning up the kitchen. MyBroPoohBear

We weren't allowed to get into the fridge or the cabinets without asking permission. My family was very poor and we had a limited food budget, so eating something without permission very possibly meant eating one ingredient of a meal my step mother was planning on cooking within the next few days.

If I told my parents I was leaving at a certain time, I had to leave at that time.

Same thing went for when I was leaving my house to go somewhere. 6lesbianlover9

My door could only be closed if I was changing clothes.

If my parents suspected that I was hiding anything, they could (and did) go through anything to make sure. Dresser and desk drawers, bags, closet, car, whatever they felt was necessary. Even my mail was fair game. As a result, I got really good at hiding things. DonNatalie

Not a rule, but still to this day I am befuddled at my mothers reasoning. When I was a boy we lived in a pretty rural part of Mexico, horrible infrastructure. Power would often go out in the middle of the night. She would proceed to wake my brother and I up, simply to wait until the power came back on.

For the life of me I cannot figure that out. She wasn't afraid of the dark, she just wanted to make sure we saw the power return.

Edit: Every one keeps suggesting because if fire reasons and come to think of it, that actually makes a lot of sense. It's actually how we lost that house. Maybe my mother is clairvoyant. thedraindeimo

The Council is Heard!

We had "family council" every Sunday night after dinner. We would sit and say good things that happened that week, share our grievances if we had any (we always did), make a dinner menu, and assign chores.

Frankly, it was stellar parenting. Though, if I mention it to my mother now, she will brag about it for a solid 20 minutes before we can move on. Illarie

I had SUPER laid back parents but there were a few certain things that they were randomly crazy strict about.

No gum. No play doh. No cereal with sugar as one of the top 3 ingredients. No Simpsons.

I had basically no rules growing up, but those four things would make them lose their goddamn minds. I still get anxious when I'm chewing gum and I'm 35. SiFiWiRi

If I got hurt doing a certain activity I wasn't allowed to do that activity again.

My mother ended that rule though when I broke my wrist snowboarding when I was 16 and didn't tell her until a month later when I couldn't move my wrist at all and it required surgery with a bone graft to repair. _njhiker

I had that rule, too. My mom bought me a skateboard. I immediately ate crap on it (as I imagine just about everyone does their first time), and then she took it right back to the store. blankblank

We weren't allowed to eat anything without first asking. Even a glass of water, we were required to ask first. When my boyfriend and I started dating, I would ask his parents if I could eat or drink something if I was hungry or thirsty and it was a hard habit to break when his mom told me I could literally eat or drink anything (other than the alcohol).

It was so weird to just go into the fridge or pantry without permission. I sometimes have to fight the urge to ask my bf if I can eat OUR food in OUR apartment.

When I went to my parent's house over Christmas, I was reprimanded for getting an apple without asking first. It's just all so weird but it used to be so normal. bigmacnpoet

Not mine but my mother in law and her sister will fuss at you if you wash your hands in the kitchen sink. I think that's weird. If there's a sink and some hand soap I say wash away. My wife isn't like that. singuslarity

I just burned this box.

I come from a large family. Any time we'd order pizza, we ordered a few different kinds because, obviously, there were different preferences. Any left overs were left in their respective boxes and placed in the oven.

I did that when I lived with a couple of roommates and of course their reaction was: "I just burned this box. Why was this in the damn oven?" Justgivme1

My Dad used to set up mine and my sister's Easter egg hunts in such a way we followed written clues from place to place, as way to help us learn to read. until I was a young adult, I assumed that was how all kids did Easter egg hunts. QueenElsaArrendelle

When I was young, my mom was big on setting up "treasure hunts" like this for birthdays. I'd have to follow the clues to find my presents. I adored it. beatrixotter

Wakey wakey time. No noise annoying mum and dad until 7am. This was a really necessary one bc I was a very early riser as a kid and I loved to talk to my parents. The rule was that I could come to their bed and curl up next to them, but I couldn't talk until 7. It was actually really nice, and made sure I got enough rest myself.

Tragically, once I started rowing like 7 years later, mum and dad had to get up at 4 anyway to get me to the sheds. Sorry guys. moorehawke

I wasn't allowed to take a shower if I was home alone.

Any of the kids (7 of us) can play with any toy that is left out. The owner of the toy can't take it back until whoever's playing with it is done. If the toy is put away in the owner's room, permission must be asked. JetScootr

People Share The Absolute Worst Names To Give A Child

Teachers Share Their Reactions To Accidentally Being Called 'Mom' By Students