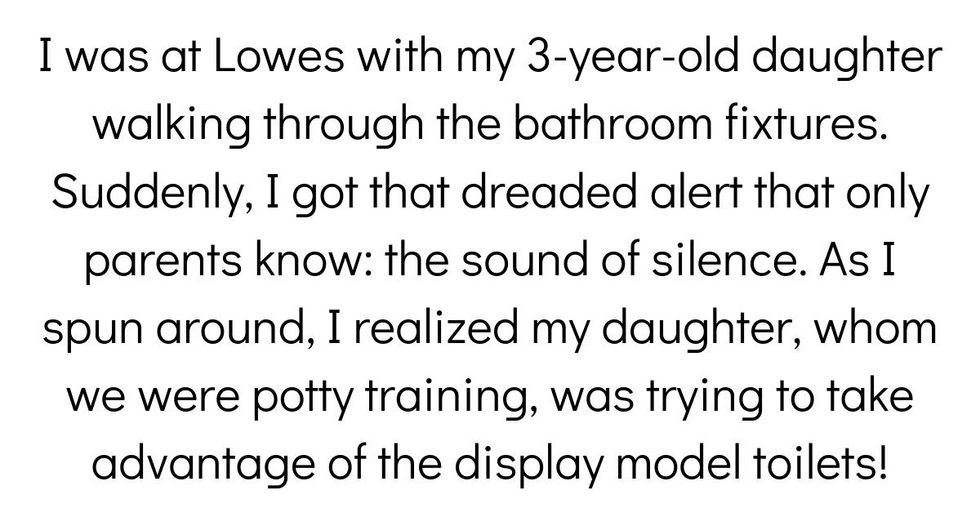 Sometimes things can completely go to sh*t within the course of five minutes. Honestly, it just depends on the type of being that you choose to leave alone during that time. Here are some stories of Redditors whose lives changed in a few quick minutes.

u/Just-another-weeaboo asked: What's your "I left you alone for 5 seconds" story?

My sophomore year of college. Had my own place. My friends from back home come up to visit one weekend. We were about to have dinner when another set of friends come to the door. Everyone is inside mingling. I remembered I forgot something in my car, so I walk out to grab it and walk in.

I walk in and they're all doing drugs off of the kitchen table.

What a nice surprise!

I was at auction, me and my friend both put in a large amount of money because we recently sold our company, well I went to the washroom, I come back to see my friend with a brand new horse!

When we were still children me and my friends were building a fort in the woods. We had plenty of tools and supplies but somehow forgot to bring nails. So a friend of mine and I went back to my house and got some...

Only remembering halfway back that the two of us are the only responsible people in our group of friends.

When we got back there the smallest of the three remaining friends has been duct taped to a tree in 2 meters/ 6'7" height and the ladder was nowhere to be found. We were gone for what must've been 5 minutes.

I was doing an on-site 96 strand fiber splice. Had been there for hours, was near done.

Boss comes by, tells me to go grab my lunch, he'll take over while I eat.

I come back, and every splice he had done was wrong. Blue was spliced to green, yellow spliced to white, etc. Because it was a tight splice case, this meant I was going to have to recut the fiber and start over. My whole day just shot.

When I got back to the office and explained the situation, my other boss says, "Why the hell did you let Bob splice? He's colorblind!"

All our friends were gathered in my one friend's dorm, and we asked if his roommate wanted join to get dinner. He was sitting as his computer and said no thanks; he had some work to do.

We got fewer than 10 steps down the hall, and my friend realized he forgot his keys. We went back and opened the door, and the roommate was fully naked and voraciously dancing. It had been literally no more than 15 seconds.

Later he told me he was timing how quickly he could get out of this clothes once the door closed.

Chilling with pet rat in bed, next to roommate's cat. Now I know you think you know where this is going, but I assure you, it's worse.

Cat is old lady who has had a few litters of kittens when she was younger. She thinks this rat is an ugly, ill-behaved kitten, basically? So sometimes she sits on him and tries to nurse him, and lets him climb on her. They get along pretty well.

I leave for a moment and come back, cat's off the bed, giving me a weird look, and rat is nowhere to be found.

Long story short, old lady cat let slip a turd and ran away from her mistake, and the rat found the turd and ran under the covers with his prize to eat it. He's just eating up this poop nugget like it's Halloween candy and getting it all over the sheets and covers. That was a long laundry day.

Quite the pissing contest.

I let two little boys in my class go to the bathroom and they were gone for awhile. When I went to check on them, it turned out they had a peeing contest. There's a small window near the urinals, and they had a competition about who could reach it first with their pee stream. When the younger boy lost, he got back at the other kid by peeing on the kid's sneakers. So the other kid pushed him into a dirty urinal and he sat on a urinal soap and mashed it into his pants.

I badly wanted to take a shower all day after pulling them apart.

Silence is the worst sound when it comes to kids.

I was at Lowes with my 3 year old daughter walking through the bathroom fixtures. We were looking to get a new faucet. While my wife and I were discussing the specifics, my daughter was amusing herself in my periphery.

Suddenly, I got that dreaded alert that only parents know--the sound of silence. As I spun around, I realized my daught, whom we were potty training, was trying to take advantage of the display model toilets!

Luckily, we didn't have to clean up a mess!

Kids do the darndest things.

I didn't know my young toddler could climb on the chairs, let alone get to the table yet (she could barely walk at that point).

I went barely out of sight for long enough to pour water into a cup and came back to her standing on the table, waving a knife around with maniacal glee.

I was watching YouTube with my $250 headphones to go get a nice glass of milk and left my door open (which I rarely do) and return at most 1 minute later to find my dog (still the cutest thing ever) had gone and ripped my wire into 3 pieces, dropped a glass that was by my computer and when I went down and yelled at her she knocked my computer off my desk in the process destroying my motherboard!

Did you ever finish the video?

People Share The Absolute Worst Names To Give A Child

Teachers Share Their Reactions To Accidentally Being Called 'Mom' By Students