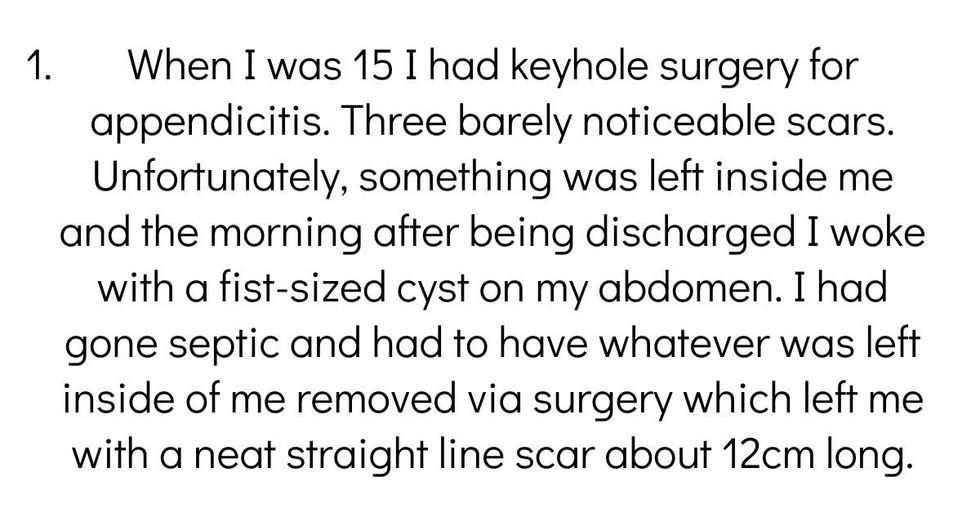 Some things you just shouldn't ask people. One of the top of the list would definitely be asking, "where did you get that scar?" when you see a physical marking on someone's body. But these Redditors have revealed all, telling the stories of how exactly they got their scars.

u/ARTX11 asked: How did you get your scars?

COTENT WARNING: Some of the stories discuss self-harm.

A yes, toddlers. AKA, tiny demons.

I have a scar on my eyebrow from when I was an a**hole 4 year old. I threw a tantrum and tried to pick up a small plastic kids table to throw it over my head. Instead I dropped it, the leg hit me with a sharp broken edge on the eyebrow/eye, I started bleeding, and I had a black eye for Christmas.

I was a terrible toddler.

What a bad influence.

My brother and I were playing WWF in the house (even though we weren't supposed to!). He grabbed the back of my head and slammed my forehead into the "turn buckle" which was the wooden corner of the arm rest on our couch. Blood started running down my face, he ran and hid under his bed. I got 7 stitches in my R eyebrow.

He didn't mean to hurt me, just got a little too into the game. Lol.

When I was 15 I had keyhole surgery for appendicitis. Three barely noticeable scars, one of which is in my belly button. Unfortunately, something was left inside me and the morning after being discharged I woke with a fist-sized cyst on my abdomen.

I had gone septic and had to have whatever was left inside of me removed via non-keyhole surgery which left me with a neat straight line scar about 12cm long. Also had to have a drain into my lower abdomen so I've got a big ol' hole about 6cm below my belly button. Unsightly as hell.

I have a big scar down the center of my chest, and 2 little "star scars" right under it.

I had just turned 3 and I was at my grandparents' house with my family. My older cousin was spinning me around in a swivel chair. I fell off of the chair and landed on my side, on top of my grandmother's knitting stuff that was sitting in a basket by the chair. A knitting needle went through my side and pierced my heart. My aunt thought the needle was just caught in my shirt, and ripped it out of me. I went unconscious almost immediately. By time I got to the hospital, I had lost a lot of blood and the doctors basically told my parents to prepare for the worst. Luckily, there was a badass heart surgeon there that performed emergency open heart surgery and saved my life! The star scars are from feeding tubes that were hooked up to me post surgery.

Cat scratch fever, what does that mean?

I have a pretty noticeable scar on the right side of my neck that often gets mistaken for a really bad hickey. The story I tell everyone because I'm sick of explaining is that I was stabbed in the neck with a knife. The real story is that when I was 5, I had been scratched in my eye from one of our house cats while I was asleep. The scratch had infected lymph nodes in my neck, causing it to become extremely swollen, where it was difficult for me to even breathe.

Doctors were baffled by what it was, where I spent several weeks/months in and out of the hospital. They speculated it was lymphoma at the time. I had my neck drained from the fluid from massive syringes that I still have nightmares over, and also have a paralyzing fear of needles.

The scar ultimately came from me undergoing 3 separate surgeries where they removed infected lymph nodes from my neck, and late discovered I suffered from a very severe case of cat scratch fever. Yes it's a Ted Nugent song, and yes it also my anthem.

I got shot in the face during a car-jacking. Bullet went in about an inch in front of my ear, through my cheekbone, through my sinus and maxilla bone, then hit the mass of bone in the roof of my mouth and stopped. The ballistic energy from the round caused it to blow about a 50 cent piece coin-sized hole through the roof of my mouth, and a combination of the blood pouring out and gravity caused the bullet to fall into my mouth from where it came to a stop in the bone right above it.

I ended up spitting it out on the ground thinking it was a tooth. Didn't realize it was the bullet until a doctor at the hospital told me it wasn't a tooth I spit out because I didn't lose any teeth. Wish I had that bullet now though tbh.

I got windmilled by a panicking shiba inu before I could clip her nails.

I've worked with perhaps dozens of pitbulls, and my one dog-related scar came from a shiba inu small enough to be carried with one arm.

I've forgiven her, though. She's a sweetheart in her own way (shiba inu can be like the weird antisocial cats of the dog world), except when it's time to clip nails or have a bath.

I was forced to be in a room full of people and clutching my cat for comfort. What I forgot was that my cat also has social anxiety and she bolted from my arms. Caught her back claws down my chest.

It was two years ago and I still have a long scar (it's a good four or five inches) running from my collarbone halfway down my breast.

My favorite one is from my husband's cat.

My husband (we were only dating at the time) and I had just moved in together a couple of days prior and he warned me that his cat was going to be difficult. He was right. I had burnt the piss out of myself making dinner the night before and had a blister on the side of my hand, near my wrist.

The cat, who I'll call Axl, was being sweet and rubbing up against me while I sat on the floor getting ready to put my clean, folded laundry away. Axl had not even so much as acknowledged me in the two days we had lived together, so I was happy at the sudden attention. I decided to take a picture to send to my husband and got up to grab my phone.

I was petting Axl and took a couple of pictures when he presented his belly to me. In cat speak, that means he feels comfortable enough to be vulnerable around you. Only this was a trap and as I went to pet the belly, I was immediately caught in the Feline Four Claw Death Trap. As I attempted to free my hand, Axl decided it was time for a full attack and he ripped open my freshly burnt skin.

As an added bonus, during the time I was gone in order to clean the wound and stop the bleeding, Axl pissed on all of my clean, folded laundry. He also pissed on my dirty laundry and all further laundry he found that didn't smell of my husband for the first week and a half we lived together.

Less than a year later he passed away. I was the only one with him and I stayed with him as he drew his last breath. He had eventually come around and would often cuddle with me rather than my husband. I miss that cat. I'm crying now just thinking about him. I'm happy to have a reminder of him permanently on my body.

It can be a hard thing to quit.

Probably a darker answer than OP was expecting/looking for, but I have quite a few self-harm scars.

I'm two months clean. Almost three. Not that long in most people's eyes, but to me it's one of my biggest accomplishments yet. It had gotten to the point where I would hide razor blades in my phone case and cut myself in public bathrooms if something happened. My thighs, legs, arms, and stomach are covered in scars of various sizes.

I think what hurts the most is looking at certain ones and remembering the painful event that triggered me to cut myself in the first place. I have a scar that says "dad" carved in my left arm and some pretty deep marks that are actually from scratching myself on my left shin/closer to my ankle after a friend back-stabbed me.

So, yeah. I'm recovering now and hopefully this helps someone out there know that they can do it too.

If you or someone you know is struggling, you can contact the National Suicide Prevention Lifeline at 1-800-273-TALK (8255).

To find help outside the United States, the International Association for Suicide Prevention has resources available at https://www.iasp.info/resources/Crisis_Centres/