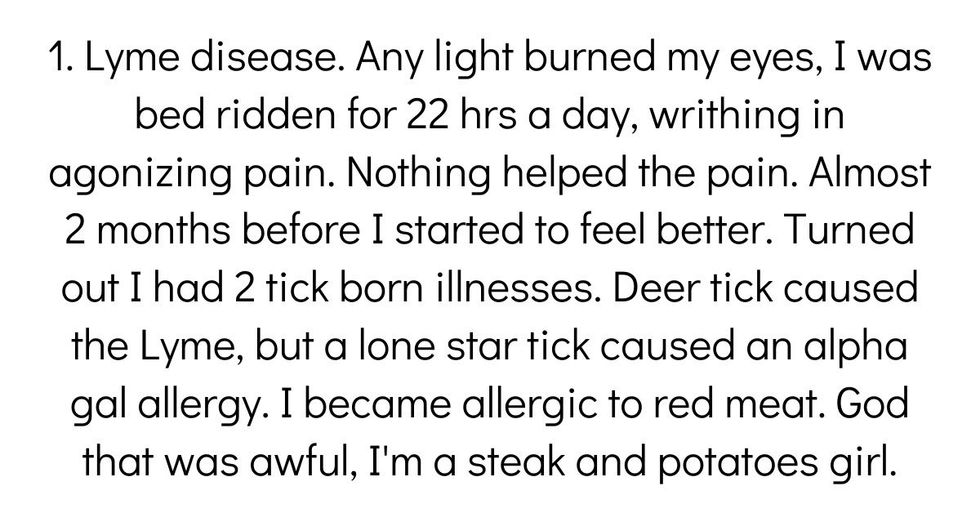 Reading this may motivate you to stay inside forever and wash your hands 37 times a day.

In all seriousness, I was struck by how many of these most excruciating event's of people's lives were brought on by some sort of pathogen or illness. It's a terrible irony that the microscopic organisms of this world are the one's most successful at taking down the clear top of the food chain.

u/mawseed asked, "What is *the worst* amount of physical pain you have ever been in?"

A slight breeze against my skin was excruciating. Skin should never be a liquid.

Tooth abscess in a pressurised cabin. The whole left side of my face was throbbing in agony. I could feel it behind my eyes too. I was actually in tears and wanted to die.

The amazing stewardess sympathised with my misfortune and gave me a little bottle of whiskey and some paracetamol.

Water flooding my ear canal thanks to a ruptured eardrum while scuba diving. (The pressure inside my head was indescribable. And for about 2 weeks I woke up to large highlighter yellow stains on my pillow -- WTF?)

I once went four entire days without being able to poop. Was essentially bedridden, had to call into work since the only movement I could muster was crawling to the bathroom to attempt to get whatever demon was plugged up in me, out. Was absolute torture, and no matter what I did to try to relieve the issue, it was all fruitless. The amount of relief when I was finally able to start emptying my bowels was indescribable.

Let's Do the Twist

Testicular Torsion, all pain is less so now I've experienced that

Worse is Knowing it's Been Dormant in Your Spine for YEARS

Shingles. Every inch of my skin was on fire. It was excruciating. Being clothed hurt. A slight breeze hurt. I still have nerve damage on my back from it.

Emotional On Top of the Physical

I had a miscarriage 5.5 months along. My body flipped out and I continued to have contractions and bleed out for 5 hours. The pain was so great that when I'd have a contraction, it world render the pain meds (Dilaudid) useless even if I'd just gotten more. I ended up needing 4 units of blood (that's a lot).

Lyme disease. Any light burned my eyes, I was bed ridden for 22 hrs a day, writhing in agonizing pain hopping from joint to joint ( my joints not weed). Nothing helped the pain. I felt hopeless, almost 2 months before I started to feel better but 8 months before a full recovery. Took the doctors forever to find the cause of it. After I got better, I wasn't really better because I had lasting issues after. Turned out I had 2 tick born illnesses from 2 different types of ticks. Deer tick caused the Lyme, but a lone star tick caused an alpha gal allergy. I became allergic to red meat. God that was awful, I'm a steak and potatoes girl.

Wonder Why They Call It That

It comes about a day after sunburn on a very small minority of people, some of the time. It's not actually sunburn, I think it's nerve endings dying or something, but it feels like being skinned, rolled in acid, fried and stung by million fire ants all at once. Everyone who's had it says it's the worst pain they've had, worse than they ever thought possible.

I saw it soar through the air gracefully because the exact image haunted me for a few days after. It stabbed into my eye before bouncing off. The pure shock numbed the pain for the most part but the sound that came from my mouth as I screamed was high-pitched though I felt no pain just stinging followed by a wave of pressure.

I had begun minor blacking out as paramedics took me to the hospital where they put some glow numbing stuff in my eye. Turns out the pen left a crescent size moon mark from the middle of my eye. I had to wear an eye patch while taking hourly medicine for months.

No one at my school made a single pirate joke, a huge letdown.

Pilonidal cyst draining, unfortunately numbing it didn't really help at all as the anesthesia mixed in with the puss and got pushed out rather than numbing the area around the cyst.

Why Is That Thing Still In There??

When I had appendicitis. Sharp dagger pain in my abdomen, continuous vomiting and dehydration.

Worst Version of Waiting for a Ride

About a year ago a kid going down the neighborhood hill on his bike lost control and crashed into me as i crossed the street. The impact fractured one of my ribs and broke my collarbone on the left side completely. I had to wait 30 mins for my mom to get back to take me to the hospital (getting an ambulance would have costed too much). The kid was ok, only because he was wearing a helmet.

My baby evacuated himself in under an hour, start to finish. It felt like a comet was shooting out of me. There was so much pain that time, body, everything just got mushed together as if in a blender and I was seeing black and purple images.

Not Worth the S'More

Third and second degree burns. It is by far the worst experience I've ever had. I'd rather break bones then get burned. Burned my fingers and whole hand in a campfire accident and literally watched my hand and skin burn off right in front of me. And the pain after just lingers and doesn't go away for days, definitely my worst experience.

Why Did You Put Your Hand In There?!

I got sucked into a boat propeller when I was 14. 455 stitches, 55 staples. When I put my hand to the cut I could feel my bone( it was on the back of my leg.

This is the Time When a Deep Breath is Not Advisable

Pulmonary embolism aka a blood clot in my lung. Woke up in such searing pain I thought I was hit by a stray bullet

People Break Down The Dumbest Thing They've Ever Heard Someone Say