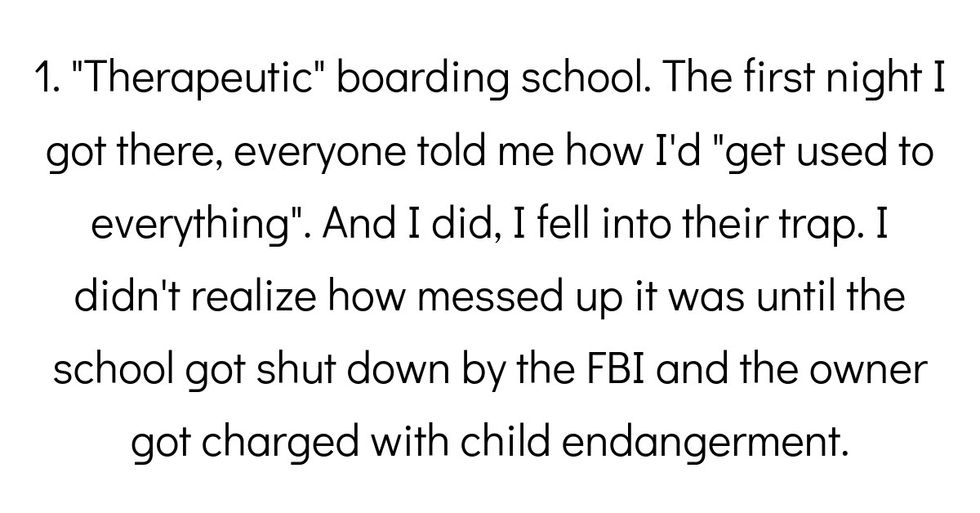 People Share The Moment They Had To Stop And Think, "Wait... Is This A Cult?"

Stopping and asking yourself whether you're dealing with a cult isn't anyone's idea of a good time, but that was what Redditor mykewamb placed on everyone's mind when they asked: "What was your 'Wait... is this a cult?' moment?"

I dated a girl in who was a total freak sexually, so when she pressured me into going to church with her, it was hard to say no.

First red flag was when they called me "brother braniel" as an introduction.

Second red flag was when everyone started yelling gibberish and jumping around.

Third red flag was when they brought out the snakes.

I actually got some pretty harsh looks because I didn't start talking gibberish and jumping around. It was definitely a case of "you're here, this is what you do" peer pressure.

So that's how I visited a snake handling holiness Alabama backwater church.

I went to a church service like that once. The guy in front of me started making those looney toon like shaking your lips with your finger noises as his speaking in tongues.

They also don't appreciate if you laugh.

I went to my 20th reunion 5 years ago, and the woman who organized it I've known since 3rd grade. Very nice, smart, charismatic, etc. and she told me about her self help/life coaching company. I said that sounds cool and maybe I could benefit so she said she would hook it up later. I live in LA and when I got back I had an email introducing me to her colleague whose email domain was esplosangeles.com which sounded weird. A quick trip to their web page and a google search and I find out she os trying to get me to join NXIVM which is now all over the news. I noped right outta there, and glad I did as a bunch of them are going to jail now.

"Therapeutic" boarding school. The first night I got there, everyone told me how I'd "get used to everything". And I did, I fell into their trap. I didn't realize how messed up it was until the school got shut down by the FBI and the owner got charged with child endangerment and molesting a student.

"My life was looking for business connections..."

Got invited to a "business meeting" for a life insurance company. My wife was looking for business connections, trying to get referrals to her company, so we went.

It was an MLM life insurance company. It was such a creepy, culty place. Everyone with fake serial-killer smiles, constantly talking about how much money they're making.

The worst part was the other "guests" around us nodding their heads in agreement, taking in the bullshit hook, line, and sinker. My wife and I just looked at each other, left, and stopped answering that guy's phone calls.

We had actually signed up for some insurance through them when we thought it was a normal company. We immediately canceled, and signed up with a real, big-name insurance company.

My now ex bf said he signed up for a professional and personal development course. I realized it was a cult when he came back with no personality and a whole new set of esoteric jargon. And any questions I had about it were rebuffed with "do you think it's a cult or something?? You know Apple is considered a cult too."

I went to a small women's college in Virginia. I only stayed a semester because the group mentality. They would constant rituals that were not "mandatory" but you were weird if you didn't go. One alone wasn't weird but collectively it was too much. Example: One founders day, everyone wore white. We went to the chapel for the ceremony and then walked 2 miles to the graveyard, where the founders were buried. We all had to lay roses on the graves and sing the school's song. Four girls in my class tried to commit suicide in the first semester.

My class only had 64 girls. If you discussed transferring the dean of students and the school's counselor would threaten to have you put in a mental hospital for 72 hours. I transferred in secret so no one would find out. I didn't even tell my friends. I would wake up at 4am and transfer stuff from my dorm room to be shipped home.

"I was looking into franchise businesses..."

I was looking into franchise businesses a while back and one place offered me the chance to buy in and become a "business coach." They had me take aptitude tests, went over my work history and said that I'd be perfect with my business background.

I went to meet them with a group of other potential franchisees at a presentation in a hotel (common for almost all franchise businesses) and was like "WTF? This is an MLM" The other people there had next to no business experience, and all they were telling us was that we had to find our clients to coach, and then read them a script off on iPad app.

What's scary is that they're an actual registered franchise business. I'm not going to say that the script they had didn't have useful things that actually could have helped a small business, mainly because I would have had to pony up around $100k just to see it.

Every other franchise I spoke to and turned down (like a food or educational chain) was extremely polite and said "Best of luck to you." These guy just cut off all contact with me, and I heard later through my franchise broker that they were PISSED.