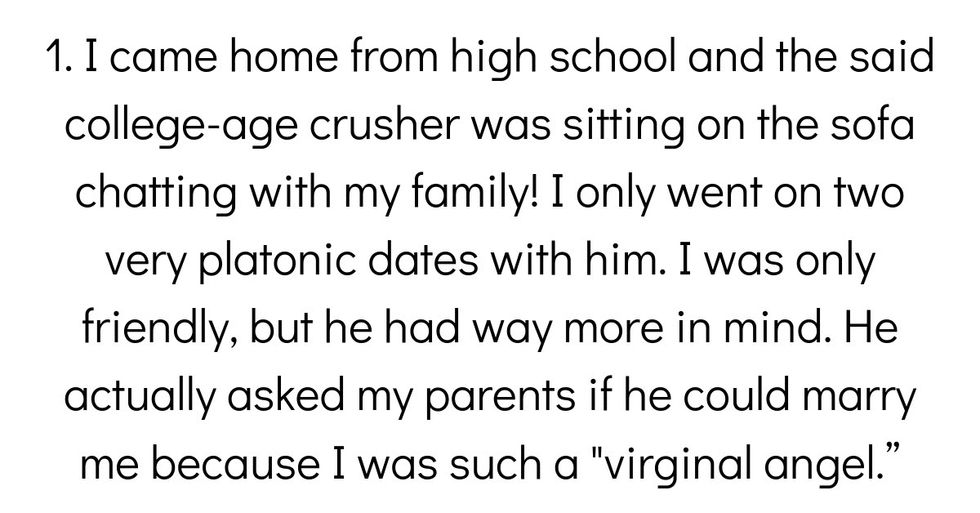 Love is a fickle thing. The emotions you experience for someone one day may not be there the next, and vice versa. You must be prepared to navigate those rocky waters with eyes past the horizon...these are not those. In fact, these are the exact opposite of that, as many people find themselves in a "relationship" with someone who takes it a tad too far.

Reddit user, u/Kaputnik57, wanted to hear what the creepiest crush has ever done for you when they asked:

What's the most disturbing thing somebody did because they had a crush on you?

Walked a good five miles with me because she was "going my way" I was almost home before I found out she lived 30 seconds from the pub I met her in. She said she'd have to stay at mine as it wasn't safe for her to walk home alone. I Ended up having explain that I wasn't attracted to her and had to call her a taxi home and pay for it.

...And A Memento To Remember

They stole my hat and refused to give it back because it "smelled like me".

We Have Pens Now, People

Wrote a love letter in blood.

Somehow the teacher got hold of it and then the whole school found out.

Proposed marriage so aggressively he had to be escorted off the premises, then later broke the lock off my dorm room and tried to get into bed with me.

Found out he had been telling my coworkers that we had been dating for weeks, when in reality I had never spoken to the dude in my life.

Found out when I was asked about my "crazy weekend" with my boyfriend when I am, in fact, single as f-ck.

Oh The Joy Of The Holidays

I was a (19 year old at the time) waitress and a 49 year old man that I'd served tried to connect with me through the missed connections page on Craigslist. He then came to my work and professed his love for me in a Christmas card that ironically had a cartoon of Santa being kicked in the balls by a child with the caption "Stranger Danger".

In his note, he said he wasn't sure if I'd be interested in an older man and he had a wife and children so we'd have to find a way around that little detail. I didn't feel safe at work so I had the police intervene and tell him not to bother me again.

Taking Initiative A Little Too Far

I came home from high school and the said college-age crusher was sitting on the sofa chatting with my family! WTF! I only went on two very platonic dates with him.

I was only friendly, but he had way more in mind. He actually asked my parents if he could marry me because I was such a "virginal angel."

Needless to say, I never spoke to this guy again, though repeated texts and calls. Goodbye and good riddance! Jeez!

Asked to meet. I told him I was not home. Answered with: "but your light is on"...

...He lived nowhere near. My street is a no end, so there is no reason he was passing by. He was creepy in many other ways. He told people we were in love (nope), that we had a forbidden love (nope nope) and kept messaging me for years (I stopped responding in the first year). I was 15-23 and he was 23-31. Even when I was living in another city, he kept telling people about our love.

Acted like a normal, sweet guy, so people had trouble believing me. I had to deny more than once that I had never kissed him, was his friend briefly when I was 15, and ignored him. It only stopped when I randomly met a friend of his in the city I live in and showed him ALL the messages. The guy was shocked. As far as I know, his friend talked with him and he finally stopped. Curiously, he began dating a girl with the same name as mine.