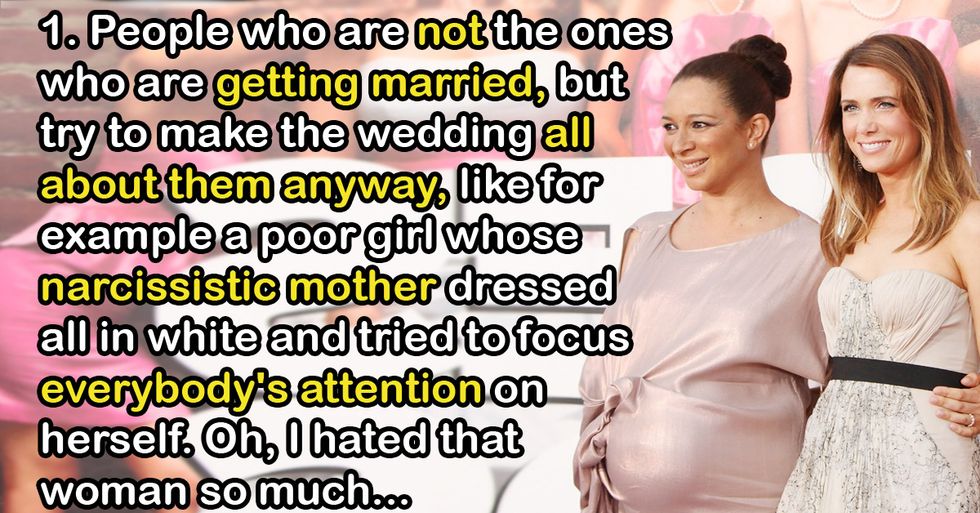 We spent all this money on gifts and travel - the least y'all can do is start on time. Or get us drunk while we wait.

They had to protect the coven from their broken bond.

It's especially cruel when there's no open bar.

And everyone around you is a straight married couple with kids and and a mortgage. Whatever, I'm cuter.

This is the tackiest of tacky attention-stealing moves.

Juicy gossip is THE BEST part of weddings.

I know you're getting married but what about meeeeeeeeeeee...

Video-bomb everything, but tastefully - for the most part.

There's always one, and it's never disappointing. "Like that time in Thailand with that stripper..."

My fabulous tuxedo is all the explanation you people need.

They judged me for triple-fisting but who's laughing now?

It's like "Poetry in Motion" except the train is stuck in the tunnel and it's 97 degrees.

This is when the open bar comes in handy. They'll find me.

Oh mister husband is going to be sorely disappointed.

Sloppy drunk selfies while "Cotton-Eyed Joe" makes its third round...

A wildly inappropriate Halloween wedding? Count. Me. In.