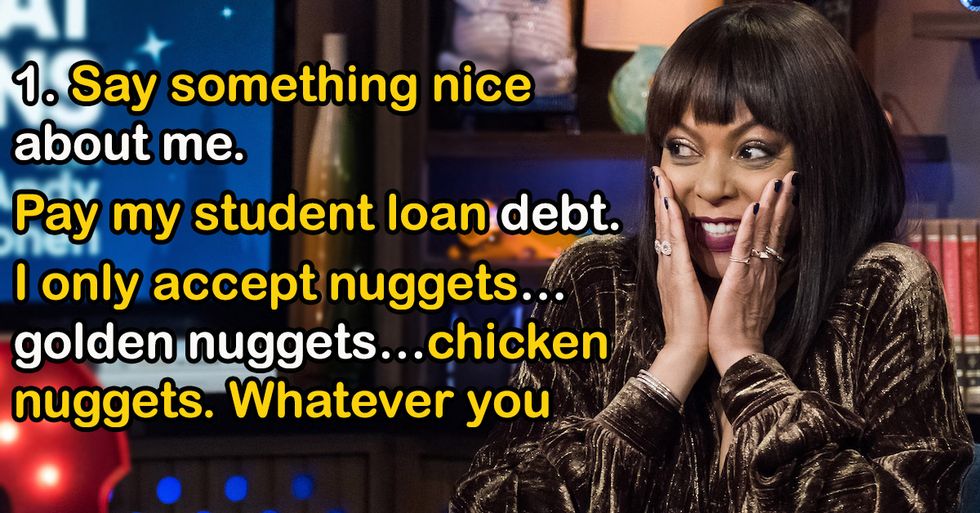 THIS BRIDGE IS CHEAP.

AND DOES THE FEDERAL BUDGET COVER IT?

AND THROW IN SOME BBQ SAUCE.

THROW IN SOME FRIED RICE AS WELL AND YOU'RE ON.

AND SOME JAM AND MIMOSAS ON THE SIDE.

NO CARCASSES PAST THIS POINT.

DO YOU COVER DENTAL?

WHO HAS THAT KIND OF CASH?

AN EMOTIONAL SUPPORT ANIMAL IS A MUST.

IT'S THE LITTLE THINGS.

STICK WITH THE CLASSICS!

OR ALL OF THE ABOVE.

WE ONLY ALLOW THE BEST OF THE BEST THROUGH THIS BORDER.

It's human nature for us to feel like we belong. Individuals can't thrive without the influence of others who are part of various communities.

Art and creativity is subjective.

One person's garbage is another's dream.

So who really knows what makes a bad movie?

I just know I've witnessed a ton of them.

To each their own I guess.

Redditor NuclearWinterGameswanted to compare notes on the worst cinema has to offer. They asked:

"What is hands down the worst movie you've ever watched?"

It's never been easy, but the world is such a disaster, it's really hard to have faith in humanity.

We need to help one another.

And often times the greatest help comes from a complete stranger.

We all leave an imprint on one another, good or bad.

Some leave a more permanent one than others.

Redditornyxflarewanted to talk about the people from our lives that left a lasting impression. They asked:

"Who is one stranger you still remember?"

When we hear the words "addict" or "addiction", our mind usually jumps to drugs and alcohol.

Indeed, people can find themselves becoming addicted to just about anything.

While some pose a less significant threat to one's physical health, they remain no less serious a problem.

Redditor Windsorbear97 was curious to hear which addictions the Reddit community felt weren't given enough attention of concern, leading them to ask:

'What is an addiction that nobody takes seriously?"