People Explain What They Will Never Do Under Any Circumstances

People Share Their Craziest 'Yeah, This Is My All-Time Low' Experiences 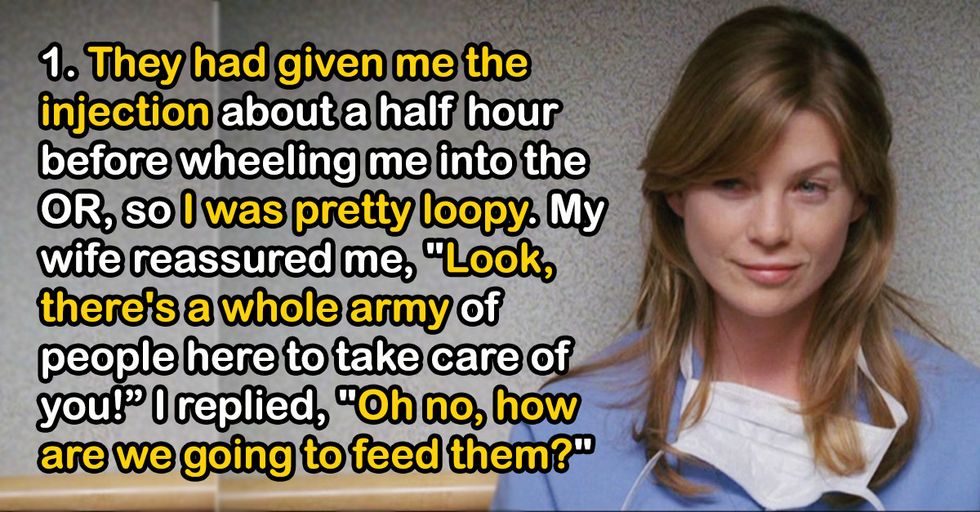 What a great way to confuse people.

I remember my surgeon in April saying, "ok, now you're gonna..." then I woke up.

Waking up outside the operating room can throw you way off.

There would definitely be a story to tell. Or would there?

After my first surgery, I woke up trying to order pizza from my mother.

My gastroenterologist used to say, "see you on the inside."

From the story it sounds like a premature discharge.

This kid got the good stuff.

I've said the same thing, and I distinctly remember laughter.

I'll have what he's having. Why not make it an adventure?

Speaking in tongues after surgery? What did they do to you?

I had a resident tell me, "I'll be working on you, it's my first day."

When you're responsible to the bitter end.

It can be intimidating having all those people watch, give them a show.

Morphine really can take you places.

My name is "let's get this over with."

Talk about driving on a 'high'way...

You've been warned, have that coffee ready.

What could possibly go wrong?

People Explain Which Things They're Sure Most Folks Are Lying About

Many people lie or exaggerate about seemingly little things. For example, I've wondered if many are lying or at the very least stretching the truth about the number of partners they've had.

People shared some of their thoughts with us after Redditor SleepingOmibozu asked the online community,

"What's something you're 100% sure most people are lying about?"

I once met a guy who, by all accounts, appeared to have given up. And by that, I mean that they had pretty much decided that life basically ended in the 1970s and early 1980s. He had no interest in modern technology, was remarkably out of the loop when it came to technology or even current events.

This was all very frustrating to witness, but he was actually proud of himself! Proud to not know much–if anything–about the modern world. (And then he complained about how he kept having trouble finding a job.)

It was quite the flex–an unimpressive one at that.

People shared some of their thoughts with us after Redditor metallicmuffin asked the online community,'

"What unimpressive things are people idiotically proud of?"

Who hasn't partaken in a trend everyone was doing at one point, but which quickly became passé?

Indeed, 90's children probably have mountains of POGs which are collecting dust in their parent's attics, and their parent's probably made every effort to hide any pictures of them attempting a mullet.

But seeing the long lineage of fads, from bellbottoms to beanie babies, we can't help but wonder what current trend people will look back on with regret, if not outright disdain, in the not-so-distant future.

Redditor stoopididiotface was curious to hear what the Reddit community thinks will be passé in a matter of time, leading them to ask:

"What current trend will be the most regrettable 20 years from now?"

When the global pandemic hit in March of 2020, everyone hoped that after two weeks or so of social distancing, cases would begin to drop and things would quickly get back to normal.

And though life is slowly getting back to what it once was, cases of COVID-19 continue to ebb and flow.

It almost feels like everyone must have caught COVID-19 at least once by now.

But even three years in and with multiple variants, there are still a very lucky, select few who have yet to test positive for COVID-19.

Redditor jwa8808 was curious to hear how those who have yet to see two red sticks on their rapid tests have managed to avoid catching COVID-19, leading them to ask:

"For people who have never caught covid even once, what's your secret?"