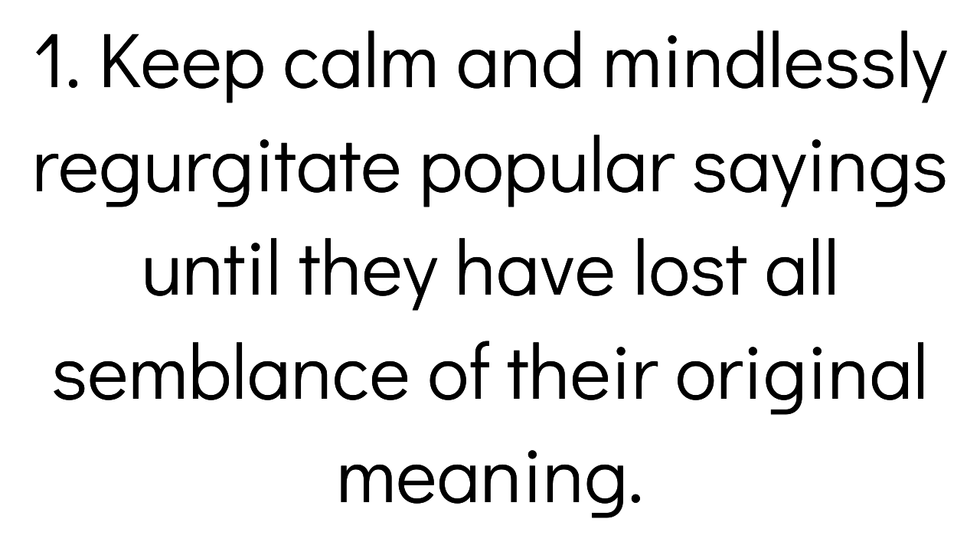 People Explain Which Trends They're Happy Died Out

Trends are never meant to last forever. They're always temporary, whether it's the horrible fashion of the early 2000's, or fidget spinners, or any number of outdated memes, trendy things are not built to last. And usually, that's for the best. Here are some trends that are better off left in the past.

u/KingMjolnir asked: What's a trend that you're glad died out?

Keep calm and mindlessly regurgitate popular sayings until they have lost all semblance of their original meaning.

I mustache you a question.

That weird obsession with mustaches printed on everything.

What was up with that? They did it with tacos too.

Those Alvin and the Chipmunk remixes. God imagine those high pitched voices haunting you at night.

I was at a coffee shop during the holidays, and a Chipmunks version of a Christmas song came on. The barista slammed down the cup she was holding and went "ALEXA SKIP" at full volume. I died of laughter.

Throwing milkshakes back at drive through workers then driving away.

Also throwing jugs of milk onto the ground at grocery stores. They weren't funny, they were just a**holes.

That song will haunt me forever.

There was a 2-year span in the late 90's when every single movie had "Who Let the Dogs Out" in it's soundtrack.

Every wacky movie trailer had James Browns I Feel Good, for a minute there.

This is still happening?

Those stupid "scientifically-backed" athletic wrist bands that were meant to do things like maintain your balance when they were glorified placebos.

Just last week we witnessed these creatures in the wild, attempting to spread their influence. They flagged down my husband. Tested his balance, which was slightly funny because their attempt to push my husband off-balance failed. "Hmmm, you're more balanced than most people." They gave him the bracelet. No discernible difference that I could see.

They want to show my husband their "evidence" that the bracelet works, and he happily agrees. Cue propaganda about curing back pain and pregnancy aches and your credit score, probably. And then comes the point where I had to walk away:

Husband: You know, I used to be hesitant about this sort of thing. I mean, the science looks hokey, and I am an engineer so I approach these things objectively. But a family friend in the Gypsy community downtown found out I had chronic back pain, and he and his family came to our house and built a pyramid on the top of our roof, directly over the bedroom. Now I'm no scientist, so I can't explain how it works, but ever since then, I've never had any back pain.

They kept talking. FOREVER. And my husband's story just keeps getting worse. The pyramid has an eye on it and monitors him when he leaves the house, in order to protect him no matter where he is, etc. In the end, he politely declined buying a bracelet, because "the pyramid is all I will ever need."

Chunky highlights, overplucking eyebrows into that sperm shape and using concealer as lipstick.

Ah yes. "Foundation lips" we called it in the UK.

In 2016 when those f*cking clowns ran around scaring people.

Time goes by way too fast.

Those were actually kind of cool.

Fidget spinners. My kids wasted SO much allowance on those things. Now they're collecting dust under beds and furniture across the nation.

I'm sure you can pick them up cheaply in volume. There are warehouses full of these, snap bracelets, and pogs.

Mine is still the Halloween 3 theme song.

Ringtones on phones, especially those annoying custom ones you'd have to listen to multiple times a day at the office or elsewhere. Now you rarely hear a phone ring and when you do it's something basic.

Man, I remember in high school being so hype to record the chorus of a song I downloaded on Limewire to use as my crush's ringtone. Now when I hear my phone ring, I cringe and yell at myself for turning my volume on.