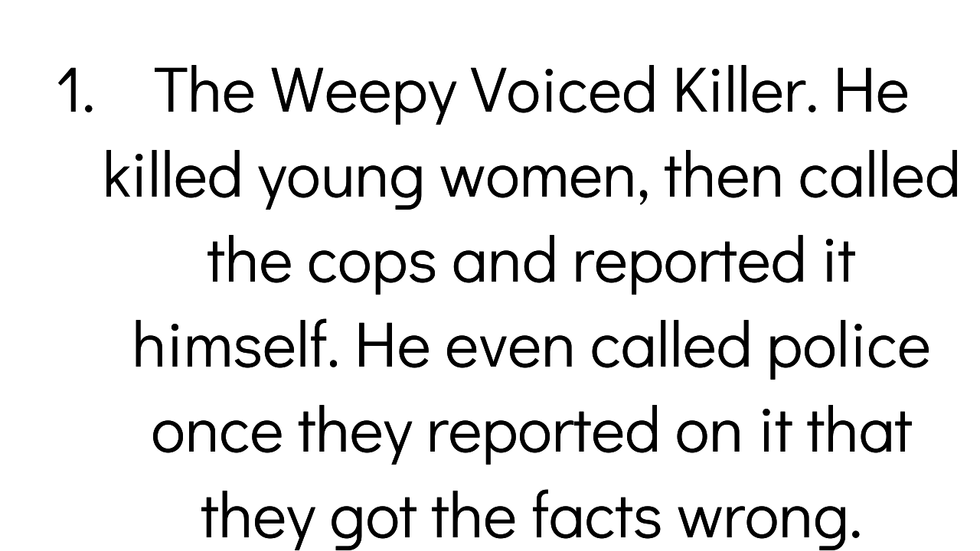 People Explain Which Serial Killer Disturbs Them The Most

u/MFDILLA_ asked: What serial killer disturbs you the most?

That's one way to do it.

The Weepy Voiced Killer. He killed young women, then called the cops and reported it himself. He even called police once they reported on it that they got the facts wrong.

God his calls were so unnerving. It was like listening to someone trying to force themselves to feel any remorse.

Dennis Rader (BTK) was a family friend. Went to my Nana's church and did cub scout crap with my uncles. When he was caught one of my uncles was freaking out because "he taught me the knots he used".

The scariest ones of all.

Those who haven't been caught yet.

Of those, the sexual sadists scare me the most. The others you may have a fighting chance with. If you can convince them of your humanity, or otherwise break that sort of trance, there's a slim but real chance.

But not to a sexual sadist. As one forensic psychologist described it, imagine the tissue you used to blow your nose this morning. Did you think of it at all after throwing it out? That's exactly how sexual sadists treat people.

One of the most gruesome.

Tool box killers. The story is gruesome even the transcripts make my stomach turn.

Came here to to say this. Learning about these guys satiated my curiosity for the macabre. I have multiple family members in the FBI and they helped with research for my writing. I listened to part of the tape and read the transcript of the murder. I can't emphasize this enough, this is the absolute depth of human depravity. I don't want to go into detail, but your description of what these guys did to their victims is pg-13 compared to the reality of the viciousness of these murders.

Seriously, once I came across this stuff I stopped exploring this part of humanity.

I grew up learning about serial killers. I thought they were fascinating. Finally I found the true gruesome play by play description of these murders and just stopped and never looked back.

Seriously, when you hear someone scream the way their victim screamed on the recording the distinction between fictional murders and real murders becomes painfully apparent. Horror movies were my favorite genre growing up, specifically slasher films. Now I avoid movies like that. The crap you see in horror movies is nothing compared to what real life serial killers have done.

I can't exaggerate this. I've literally made a commitment to never tell anyone the details of what I've heard and seen.

The toybox killer and Albert Fish are two close runner ups. Fish was another sadomasochist with a passion for genital mutilation, for both himself and his victims. Toybox killer is a repulsive case study into the perversions of a group of a people.

But seriously, the toolbox murders are sick. From what I understand one of the investigators killed himself and named the killers in his suicide note as a reason.

This case is the best example for the idea that evil triumphs over good because good men rarely understand how truly wicked evil men can be. If someone put a gun to my head and told me to do what they did I would tell them to pull the trigger.

The Vampire of Sacramento.

I'm gonna go with cannibal and necrophile Richard Chase, the "Vampire of Sacramento". He's a super, super creepy dude, but also a little bit sad, in that he was obviously mentally cracked right from his youth and yet he was just kind of ignored and left to fend for himself. A few choice passages from his Wikipedia bio:

That's what's scary about them.

Ed Kemper, honestly he seems like the type of guy you'd strike up a convo with at the grocery store or some sh*t. He seems so sane when he talks if you don't think about what he really did. Very calm sounding. He's also 6'9 which is horrifying.

H.H. Holmes and his Murder Castle. He had it built/modified with soundproofed rooms, secret doorways, hidden passages, airtight gas chambers, and chutes directly to the basement where he would send his dead bodies, dissect them, then sell the organs on the black market, sell the skeletons to medical labs and schools, and dissolve everything else in vats of lye/acid, or burn it all in the basement's crematorium.

He got away with a lot more than just murder. His entire life was just one criminal enterprise after another that he'd constantly get away with.

Joseph James DeAngelo (Golden State Killer/East Area Rapist/Original Night Stalker). Just mind-boggling how much misery he inflicted and how he got away with it for so long.

What maybe creeps me out the most about that guy is how he just stopped one day. Like, you think about serial killers, and you imagine that they're just crazy, or it's this intense compulsion that makes them do it. But this guy just stopped one day. Meaning, he could have stopped whenever, but made a decision to keep doing it. That really spooks me out.

One of the craziest cases.

Ted Bundy. Only because during his trials, even with all the evidence stacked against him, people (especially women) trusted him. Mostly because he "didn't look like someone who would kill". Meaning he was attractive to the female populace.

Robert "Willy" Pickton. From what I know, arguably Canada's most notorious and twisted serial killer.

Killed between 50 and 90 women and fed their remains to pigs, at his farm. If I recall correctly, he got convicted of 49 murders.

Creepy is an understatement.

Killed his mother and tried to kill his father and sister as a teenager. Once out of juvie he went on to live a normal(?) life, got married and all that. At age 47, he butchered his wife and niece before killing himself. While investigating this it came to light he may have been connected to 26 unsolved murders in Florida.

Crime Junkie has a really good podcast episode on him.

One of the worst.

Ted Bundy, I live in Utah and people are very friendly and kind of naive sometimes. It's unnerving that someone like him could become part of the Utah/Mormon culture just to have access to young girls.

Also, he doesn't look creepy he looks really normal and was studying to be a lawyer. If I met him irl I probably never would suspect his evil motives. That kind of serial killer is really scary to me, the kind that blends right in.

The Night Stalker. Would break into places and wait for so long to spring on his victims, and then he would tie them up and blindfold them and they would never be able to tell if he actually left or was waiting for them to move so he could kill them. I think about that sometimes at night and I find it terrifying.

I often think about this question. The Toy Box killer was already mentioned, and I agree that his torture methods are the worst. I would like to add Richard Chase, AKA " The Vampire of Sacramento", and Richard Ramirez, AKA "The Night Stalker".

Chase was severely mentally ill and unmedicated, and had a fixation on blood. Ramirez's upbringing is upsetting in itself, but someone breaking into my house and brutally murdering my family would be one of the most violating ways to go.

Harold Shipman or any of those "angel of death" type killers. Insulin poison type killers I have no respect for. People like Kevorkian types the movie on him played by Al Pacino scared me and made me cry.

People Explain Which Sights They Want To See Before They Die

People Explain Which Things Instantly Make Them Hate Someone