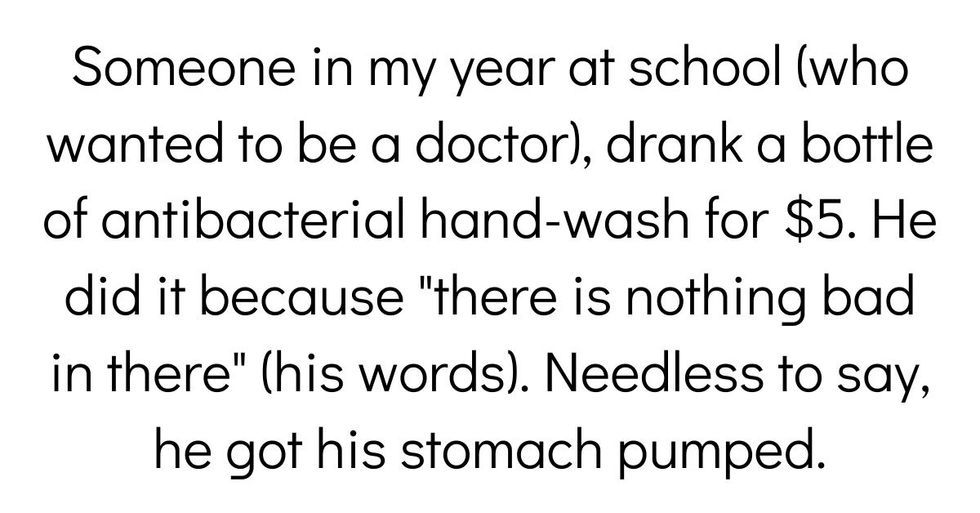 Were you the class clown in high school? If you were, you know that there's a lot of pressure that fellow students put on you to constantly top your last stunt. So naturally, there are times when it goes completely south. Here are some of the most horrifying stories of class clown pranks gone wrong.

u/Packaging69 asked: When did the "class clown" take it too far?

Maybe a better career choice needs to be made.

Someone in my year at school (who wanted to be a doctor), drank a bottle of antibacterial hand-wash for $5. He did it because "there is nothing bad in there" (his words). Needless to say, he got his stomach pumped.

I'm sure he gained valuable insights into his future career.

My high school class clown made a joke in a dead silent class room about boning a teacher with another teacher in the room. His situation afterwards wasn't great.

Ate a sh*t ton of notebook paper and ended up going home after he projectile vomited on the godd*mn floor.

"I ate my homework".

This would NOT fly today.

I knew a guy, high school student in the late '60s. He and his best friend were very close, but had also dated the same girl. My buddy dated this girl first, now the friend was dating her. No problems, but they both understood how this could be perceived as a potential friendship ender.

They had a joke all planned out. The best friend grabbed some ketchup packets from a fast-food restaurant. After lunch, he was sitting in class with the packets torn slightly, tucked unnoticeably in his hand. My buddy had the starter pistol from the track and field team. You see where this is going.

My buddy ran into the classroom and shouted, "YOU CAN'T STEAL MY GIRL FROM ME!!! IF I CAN'T HAVE HER, NO ONE CAN!!!" He fired the starter pistol (filled with blanks, not bullets) in the direction of his best friend. The friend, who had jumped up from his desk during the shouting, clutched his chest from the fake bullet wound, sending horrifying streaks of red (ketchup) flying all over his white t-shirt. He collapsed.

The look of horror on the face of every student in the room, my buddy said, was amazing. He and his best friend both got detention.

Sometimes I think about this story, and I wonder what would happen if high school students tried this in a post-Columbine world. It's crazy how much times change in just a couple of generations.

This one kid thought it would be funny to snort a line of that sour powder. This was no small line mind you, I actually think he was rubbing it off the candy. Anyways, he does his line and instantly starts screaming. His nose was gushing blood and I honestly think he popped a blood vessel in his eye. Ran out of the room and later saw an ambulance come to the school.

When I was in 3rd grade we were all doing our thing, coloring, reading, etc. The class clown was being REALLY noisy and kept goofing off. We were all having fun and the class clown eventually sat down. It wasn't long before he was laying on the floor, foaming out of his mouth, shaking violently. We all laughed, it was a joke right?

Before long the teacher came rushing over to see the new "joke" the kid came up with. She immediately called 911 and he was rushed out of the room. He had a seizure while the whole class thought he was joking. He recovered and everything was fine, I just feel bad for the kid.

When he yelled "I lost my virginity to my dog!" during a quiet moment in class. Every head whipped around to stare in horror.

This is brilliant attention seeking behavior. Where do you go from there?

Pulled out a chair from underneath a kid thinking it would be really funny when the kid fell. The kid ended up falling and cracking his head open and getting around 30 stitches.

I was going to tell this same story except the girl broke her tailbone when the chair was pulled.

When he ate part of the squid we were dissecting. Stomach pump for you, Chuckles!

Similar story- when I was in middle school, we needed to dissect a perch. We were allowed to pick our own groups, but because I didn't have any friends in the class, I got stuck with the obnoxious kids. One of them had the genius idea of putting his mouth up to the fish's anus and sucking it like a straw. He ended up throwing up.

In a high school classroom with a chill teacher, someone made a joke about another kid's d*ck being small. So, that kid exposed himself in front of the whole class to prove that it was large. He got suspended.