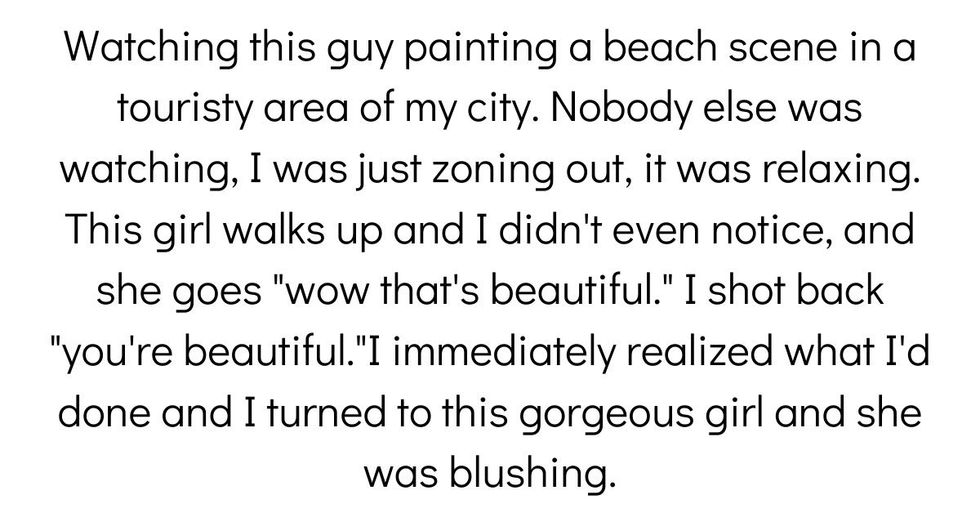 Everything happens for a reason, right? Even the worst things that happen to us make us the person we are today, and while it may suck at the time, ultimately it can lead to growth and happiness. Here are some of Reddit's best mistakes.

u/S_aturn asked: What was the "best mistake" you have ever made?

Watching this guy painting a beach scene in a touristy area of my city. Nobody else was watching, I was just zoning out, it was relaxing. This girl walks up and I didn't even notice, and she goes "wow that's beautiful." Just a joke as reflex but I shot back "you're beautiful."

I immediately realized what I'd done and I turned to this gorgeous girl and she was blushing. I think we were both speechless for a second. We flirted for a couple minutes but I was far too flustered from my f up to ask her out. Which makes no sense in hindsight but it was a great mistake.

I was a dumbass 19 year old who couldn't afford a dog nor did I get the type of dog for my lifestyle.

I had to keep being better for her. We had a rocky journey, but now she's a spoiled ass boxer that goes to daycare and plays every day.

Helping my last girlfriend's brother make some money by paying him to watch my cat. She flipped out and ended up breaking up with me over it.

Turns out, my relationship was pretty toxic and I couldn't see it because I was so in love. Still recovering from the toxicity, but I can see it as a positive now and I'm really looking forward to 2020 because of it.

Buttf*ck nowhere is the best.

I moved to buttf*ck nowhere to start a job. My mom kept saying it's a dead end, and that I really need to switch jobs every 3 years if I want to progress. It was a 5 hour drive through twisty winding roads to a place where nothing but sheep, cows, and turnips grow in a 100 mile radius. It was pretty dire, and I could only think that I was making the biggest mistake of my life.

Deciding to take a paid internship. It was a total scam, I had to door knock on houses and then convince them to hire me to paint that house.

My wife was working with the same company and we met at a Christmas party.

Getting banned can be the greatest blessing.

I was sent to work in another office that didn't have their sh*t together. Apparently I made some mistakes and customers got pissed off and it got back to my boss. Fast forward 6 months and that office is still a sh*t-show, but I never had to go back because I'd been "banned." It was great.

When making a batch of oatmeal-raisin cookies, I mistakenly used "Craisins" instead of raisins.

The cranberry flavor and texture turned out to be a big hit with everyone that tried the cookies.

We love a good flight mishap.

When booking airline flights on-line was newish, I booked a flight from New York to Detroit and a rental car at the airport. I meant to fly into Detroit Metropolitan Airport but booked to Detroit City Airport by mistake.

The plane landed and they rolled up some stairs to the plane almost immediately. I walked fifty feet to the terminal building; waited a few minutes for my bag; walked thirty feet to the car rental counter; got my key; walked another fifty feet across the road to the car lot; got into the rental car and drove away.

Ten minutes later I was passing Detroit Metro on I-94. Had I flown into the larger airport, I would have still been waiting for the plane to pull up to the gate and for the extendo-thing to be hooked up.

This girl (A) was introducing me to her friend (B) at a restaurant. I thought nothing of it at the time, but later she (A) asked me what I thought of her friend(B) and my response was "She's cool, I like her" as in "she's a cool person, I like her as a potential friend"

Shortly after this conversation, she(A) went to her friend(B) and told her I liked her and wanted to date. I didn't have the heart to tell her (B) otherwise. So long story short, we have been married for 5 strong years

I thought this said "biggest mistake" and I was so pumped cause I had a great one. But nope. Thought really long and hard about this and had nothing until I read that one comment about them having a dog.

So I'll say this: my roommate moved out and ditched her cat with me, said she'd try putting her up for adoption and never did. And I couldn't handle doing it myself so I kept her. So here we are, never was supposed to have a cat, never thought I ever could have a cat, and now this cat is quite possibly the only thing keeping me alive. Where would I be without her?