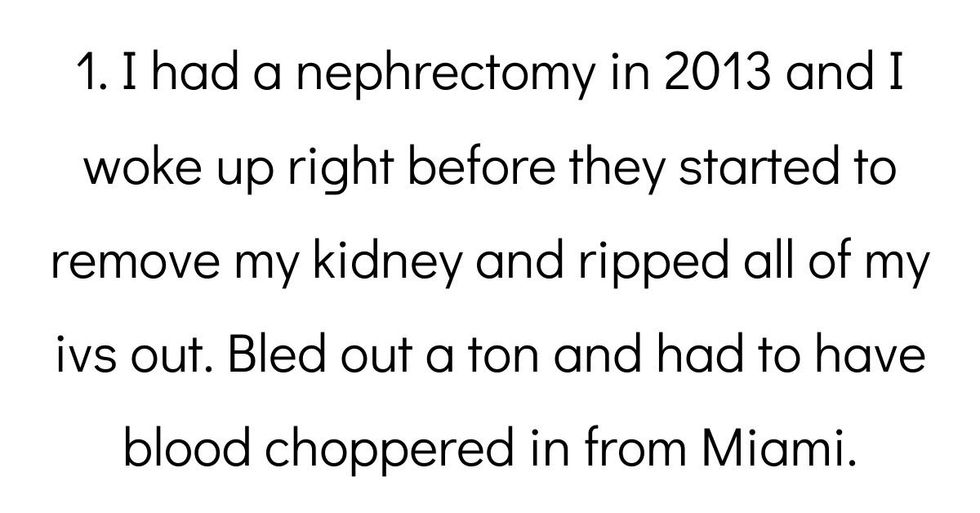 Not many people can say that they've cheated death. It can happen so suddenly, and come out of nowhere, so when we escape it, it truly feels like a miracle. Here are a few stories of these miracles, told by the kind people over at Reddit.

I was chatting away with a bunch of friends in high school, standing in a pedestrian-only street. Suddenly my friend's face goes blank, and she reaches out and pulls me in by my collar, without a word. A huge truck whoooshes behind me, right by, not an inch to spare. It thundered by at full speed, I didn't even hear it until it passed me.

She didn't have time to say anything or panic, just casually pulled me away from certain death. Very grateful for her quick reflexes.

I was dead for around 6 min at the bottom of a pool and they revived me.

You are one of the few people that can actually say: "I died. But I got better."

When I was 18 years old parkour was all the rage. I climbed commercial buildings weekly with a friend. One night during a full moon we decided to climb a 12 story building under construction.

I got to the top. Jumped from an I-beam to another... except it was rounded. I slipped and fell. Instead of falling 50 meters I landed on my nuts on a post at a 45 degree angle. I slid what felt like forever backwards, further grinding my poor boys.

I may have not died but future generations may have.

Yes! I had a massive brain hemorrhage. They said it was the biggest they had seen in my local hospital. It was 50:50 whether I would survive the night. I did survive, and that's the story of how I cheated death that one time...

My dad had multiple subdural hematomas. First day they counted 3. The second there was so many they couldn't give a count. After almost 10 years he is alive, and is still getting his meds adjusted.

There was a time where I got strep and the doctor said it had possibly progressed to a full on flesh eating disease. And if it did I was f*cked (obviously expressed in different words). Good news! I am still alive.

I got a rash on my arm that turned into what looked like acne on my arm. It tested positive for strep and i got a bunch of shots in my a** and wasn't allowed to go to school until it was gone. A few years later I learned that I was very close to losing all the skin on my body if we hadn't caught it and filled me up with antibiotics.

I'm a recovering addict, spent a little over 10 years in active opiate addiction. Towards the end of my last run I was actually trying to kill myself.. Not because I wanted to die, but because I had given up. I just wanted the mental anguish to stop. Long story short, I overdosed 13 separate occasions. I definitely consider that cheating death.. People die from an overdose literally every day in my city.

I had a nephrectomy in 2013 and I woke up right before they started to remove my kidney and ripped all of my ivs out. Bled out a ton and had to have blood choppered in from Miami (I was at naval airstation Jacksonville).

Had a Brazil nut as a kid (dear parents: who gives a very young child a Brazil nut for a snack?) and immediately went into anaphylactic shock. Despite the night being fuzzy, I remember so vividly the feeling of my throat swelling and managing to say "something isn't right" before losing the ability to speak. My parents shove Benadryl down my throat and drive me to the hospital.

By my parent's account, the doctor was very, very complimentary of them for having the foresight to give me Benadryl before coming, saying I would have been dead on arrival had they not done it. I joke that we became a "Benadryl family" after that. It was in every drawer, every cabinet.

On Christmas 2017 I ate a piece of some dry meat. I was chewing and chewing it, but it was still a hunk of meat. I finally swallow and feel it just stick in my throat. I try to swallow it. Doesn't budge. I try to cough and nothing. I realize that I'm not breathing and I start panicking.

I slap my hand down on the counter to get my sisters attention and she looks at me a little funny and says "what?" I motion to my throat in the most morbid game of charades that I'm choking. She says "Oh my god, are you choking?" And runs to me and starts the Heimlich.

All I can think about is my 1 year old daughter having to grow up knowing her mom died on Christmas. I was getting light headed and finally the piece of meat is hurled out of my mouth and I'm gasping crying. I hug my sister and we're both just sobbing. It was the scariest, ugliest feeling knowing I couldn't breathe no matter how much I wanted to, needed to. Chew carefully, my friends.

I have a rare condition that makes me prone to aneurysms. In 2018 I was helping a buddy work on a car when it felt like I was shot in the abdomen. I had my buddy take me to the ER. When I was finally seen my bp was so low they had no idea how I was still conscious. I was rushed to imaging where it was determined an aneurysm had started dissecting and I was losing blood fast.

I had a 5% chance of coming out of the surgery alive, and then 10% to even walk out of the hospital within a week.

When I was 7 years old my friend had one of those red wagons with a handle you can pull. We had the bright idea of attaching my dog to the wagon and having him pull us around (he was a very large dog).

Soon after tying my dog's leash to the wagon, my dog takes off at full speed towards an extremely busy road with me inside the wagon. My friend chased us and grabbed the back of the wagon, stopping my dog and me from hurling ourselves into traffic.

Had two horses run over me whilst I was pinned into a ditch one clipped back of my head other must have just stepped on my side, got up and walked away. No pain whatsoever was super lucky.

Appendicitis is no joke.

After being misdiagnosed with a stomach bug, I had a ruptured appendix for nearly a week. My eyes turned yellow. They finally removed it and pumped me full of an ungodly amount of antibiotics. I lived.

Too many times to count, pretty sure my guardian angel is facepalming itself saying "Not again" after every incident.

The most note worthy:

Dropped 6 meters from an oak I was climbing, hitting every branch possible on the way down. Survived with a mild concussion and a few bend ribs.

Have been hit by more cars that I care to count. The worst was probably when I t-boned a car with my bike, he ran a red light, and got flipped over its roof and landing on a street sign on the other side.

Oh and for non freak accidents. Survived two bouts of cancer between the ages 19-25.

That's why those things are banned in the US.

In my early teens I was eating a kinder surprise chocolate. I guess my mouth was already dry but the choc stuck and closed off my throat, I couldn't breathe. I couldn't reach the water bottle in the cup holder. The other 4 people did not notice me. I got the attention of my sister but she did not clue in to my pointing to the water bottle or my gasping for air. I was getting close to blacking out before I was able to finally gasp out "water". At the last second someone gave me the water bottle.

At 17 I sped 175km/h in the oncoming down a bumpy country road to pass another car who was already doing 110. The other car sped up, the van I was driving was maxed. A car came in the oncoming lane, I'm lucky the other car slowed down so I could get over at the last second. Never again.