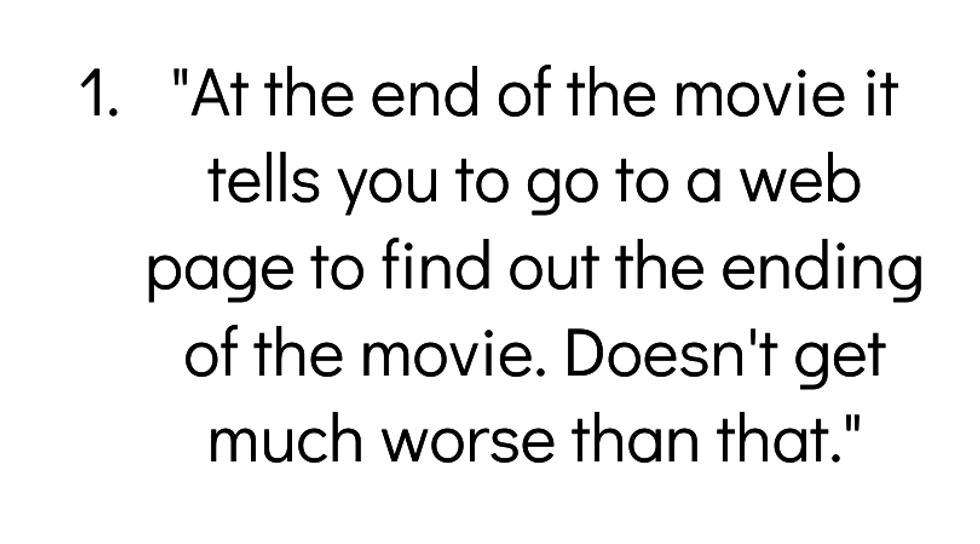 People Debate The Absolute Worst Ways To End A Movie

Some movies have endings that are just blatantly terrible. Pretty in Pink, Hair, The Human Centipede- it's amazing sometimes how an ending so bleak or unsatisfying could be approved by any movie studio. These are examples of some terrible movie endings- here are more from the kind people over at Reddit.

u/christianreeve93 asked: What's the worst way to end a movie?

At the end of the movie it tells you to go to a web page to find out the ending of the movie. Doesn't get much worse than that.

I have not seen this movie but this right here has to be the winner.

That's how The Meg ended. So there's that.

It was all a dream/movie/fake/never happened . . . . f*ck you "Ice cream Truck Killer", why did you have to have that ending!?

I agree with you with one exception - The Wizard of Oz mainly because at the time it was filmed, that wasn't a done-to-death plot but also because it was pretty clear it must have been a dream from the beginning since most of the main Oz characters looked exactly like Kansas characters.

With a plot twist that comes completely out of nowhere and makes no sense, purely for shock value.

This is what happened in Now You See Me and I was amazed at how much people liked it despite this. There were scenes of Mark Ruffalo personally being distraught that he couldn't catch these guys and then apparently he was supposed to be the spectator/judge of this vague magician cult the entire time. So its like--what was he doing? Was he trying to convince himself that he wasn't involved? I guess you could say some bullsh*t about how "he was just that clever" but it really just made it look like they decided to change his values at the very end of the movie for the purpose of a twist.

Completely changing the outcome to awkwardly turn it into a happy end. Looking at you, I Am Legend.

This is my personal pet peeve with movies.

Tom Cruise's Far and Away pissed me off so badly with this. The end of the movie he dies and the camera starts to pan out while the soundtrack music turns to a minor key. We see Nicole Kidman's character holding his dead body. A beautiful poignant ending scene. But then the music swells and the camera reverses to start panning in on Tom Cruise and suddenly he gasps and wakes up and is just fine so they can live happily ever after. What utter crap.

Leaving it open for another movie, that sucks a**.

Especially when its a really GOOD opening, but the sequel never comes. I'm still waiting to see what the (expletive deleted) is crashing through the jungle at the ending of Deep Rising.

and then, after a few seconds...

When the studio basically says, "did we make enough money to justify a sequel?"

Glad they didn't use this one.

Having a dude walk in and shoot Dante after Randall leaves for the night.

That scene is more revealing than one might think. Kevin made 'Clerks' because he was afraid of getting robbed, shot, and dying without having done anything with his life but jockey a register.

Killing off all if not most of the characters for no f*cking reason. Not for plot development, just cuz "hurrdurr, our movie is dark, something something not everyone gets a happy ending hehe". Especially when the audience has connected with the characters throughout the movie. Don't kill em off with no intention of making the movie better. They did this so much especially back in 1998 when the undertaker- I'm kidding, I won't do that to you.

Loses all of its meaning.

A voiceover narration over the last scene explaining what we were looking at and what it all meant. Man, I forgot how powerful that scene was.

Anyway, the whole point of the movie was to NOT explain what was going on so you would try to figure it out yourself because, in the end, that's how exploration and discovery work.

People Break Down Which Historical Figures Are Completely Overrated

People Share The Darkest Facts They Know About Cartoon Shows