People Cast Their Vote For Worst Characters In TV History 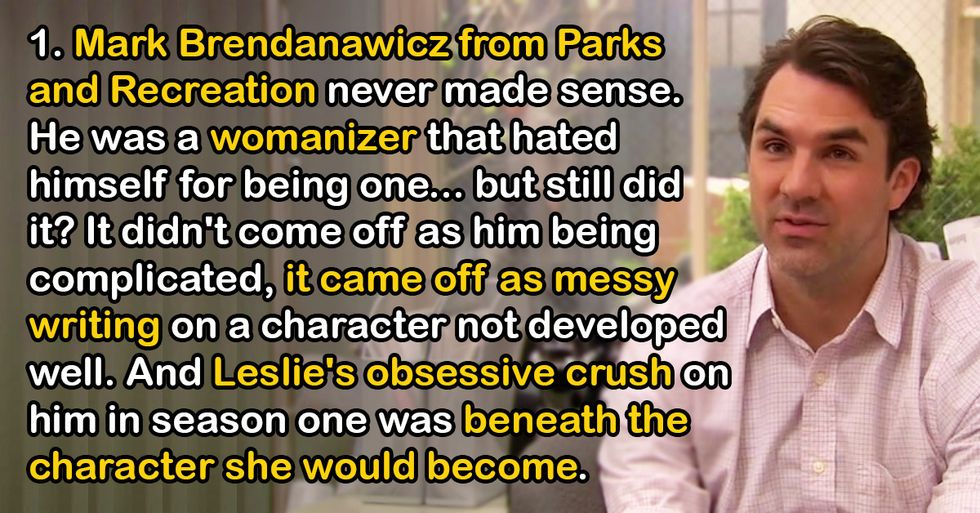 People Cast Their Vote For Worst Characters In TV History

He did kinda hold the team back... like a toddler among stoners. Oh wait...

The privilege is real on Gossip Girl - so is that lack of self-awareness.

Well, he WAS King Arthur's father, isn't that enough?

He was far too shallow to replace Eric.

Plus she totally betrayed Rick...

Good news everyone, you don't have to watch it.

Leslie fawned over him for way too long.

That's the drug dealing business for ya...

Took me all of one episode to realize this truth.

Maybe the show as trying to get a sympathy vote? Who knows.

It's weird because Jim Parsons is actually funny.

Just once, give Tony a break, will ya?

Poochie's home planet can have him. As for Roy... why?

Being Carrie is goals though, so...

There's just no way his Infowars persona can be real. Right? Please?

He tries though, bless his heart.

I relate to Brian on a spiritual level.

[rebelmouse-image 18354135 is_animated_gif=
From Your Site Articles

Some people will just believe anything.

And if you call a statement a fact long enough, many people take it as gospel.

Some facts are absolute truths, others can be malleable.

And research is an actual art form.

Movies can mold who we are.

Some stories caught on film leave an impression that we take with us through our dying breaths.

That's why the arts and artists are so vital.

But there are some movies and specifically movie moments that can be to much to rewatch.

We may love the movie, but a certain scene may always be on the fast forward list.

Sometimes it's all too real.

People Describe The Quirkiest Things Their Partners Do

Every person, and every relationship, is unique, and that includes what makes each partner deeply and truly happy, or annoyed.

Since all of us have our little quirks, it makes sense that our partners would enjoy some of them but not others.

But it's hard to tell how each behavior will be received.

The Most Controversial TV Shows Of All-Time

The amount of shows that have aired in the history of television is a lengthy one, and the ones we know of are the ones that have been picked up by the networks.

There are tons of other ideas that have been pitched that have not seen the light of day and some that have been produced and presented as pilot episodes but eventually scrapped due to a variety of reasons.