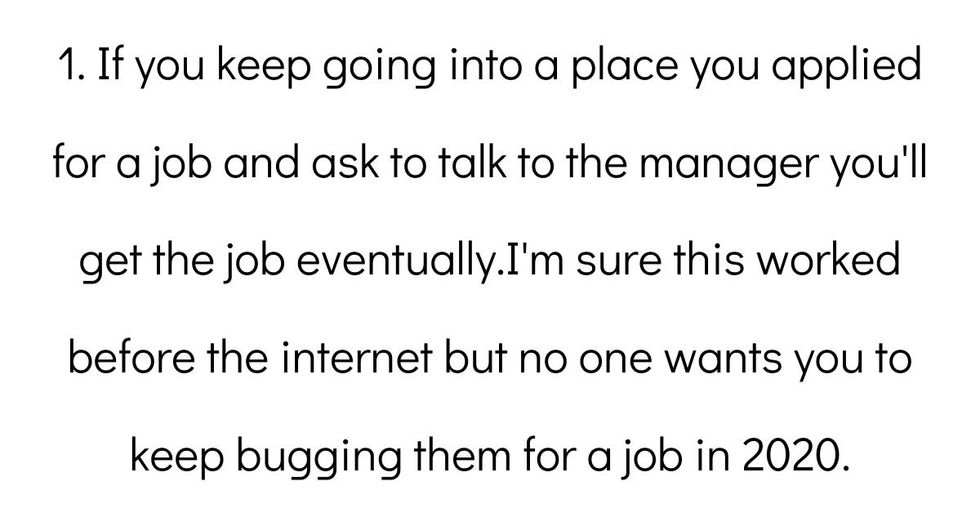 People Break Down Which Pieces Of Advice Are Exclusively Good In Theory, Not In Practice

In an ideal world, every piece of well-thought out advice would be foolproof. If every bit of knowledge that was passed down to you worked every single time, well, more people would be open to receiving it. But that's not the case. Here are some pieces of advice that work best in theory, but not so much in practice.

u/josh_carling asked: What is good advice in theory but awful in practice?

"The right person will come, don't sweat it"

Not if you're rotting indoors all day every day and don't bother with hygiene or anything resembling fashion. I get what people mean when they say it, but a lot of the time it comes across like "Do nothing, make no effort". I see people give that advice a lot to others that are down on their luck, and it's a nice sentiment, but don't get the wrong idea... a lot of it is luck, but you have to put yourself in a position to be lucky in the first place, if that makes sense.

It's ok to give up sometimes.

There are times when you absolutely should give up, quite a lot in fact.

Had I taken this advice in college my final GPA would have been MUCH better- but I refused to drop classes I was failing.

Be yourself. No, be the best person you can possibly be. Don't be lazy, mean, or a pushover.

"Be yourself. Unless 'yourself' is an a**hole."

If you keep going into a place you applied for a job and ask to talk to the manager you'll get the job eventually.

I'm sure this worked before the internet but no one wants you to keep bugging them for a job in 2020.

My dad told me to go into Dollar Tree and told me to tell the manager that I'm not leaving until I have a job there...

The manager almost called the cops on me.

If you ignore bullies they will just go away.

Honestly the best advice I ever got on bullies was to just beat them up.

Though nowadays there's cameras everywhere so I wouldn't recommend it unless you can make it look like self defense.

If you try hard enough you'll get what you want

It is possible to commit no errors and still lose. That is not a weakness, that is life. - Captain Jean-Luc Picard

"You can become anything you want to".

Statistically no. You can't. You should maximise your opportunities and options. If you're a 5'6" kid with no athletic skill and a heart condition, you're not making the NBA no matter how hard you try.

Prepare for the worst.

"Everything happens for a reason."

Any of those BS one liners don't hold water. Can you do something about the problem? Yes? Then do. No? Then prepare for the fallout.

My only advice is this: "Hope for the best, prepare for the worst."

You shouldn't want to trade lives with anybody.

I saw a meme recently that said, "never take advice from someone you wouldn't trade lives with." Sounds great, until you realize that you can learn from others' mistakes...they could be giving you valuable advice on what not to do and how to avoid the pitfalls that ensnared them.

Respect your elders. I don't care how old you are, if you're a d*ck I'm not going to give you respect because of your age.

Theres that old Tumblr adage of the different uses of respect.

Some people respect you as an authority.

Some people respect you as a person.

But they mean, if you don't respect me as an authority, I wont respect you as a person.

That sh*t don't fly with me.

People Break Down The Major Incident That Happened At Their School

People Share The Most Trivial Things They Miss From Their Childhood