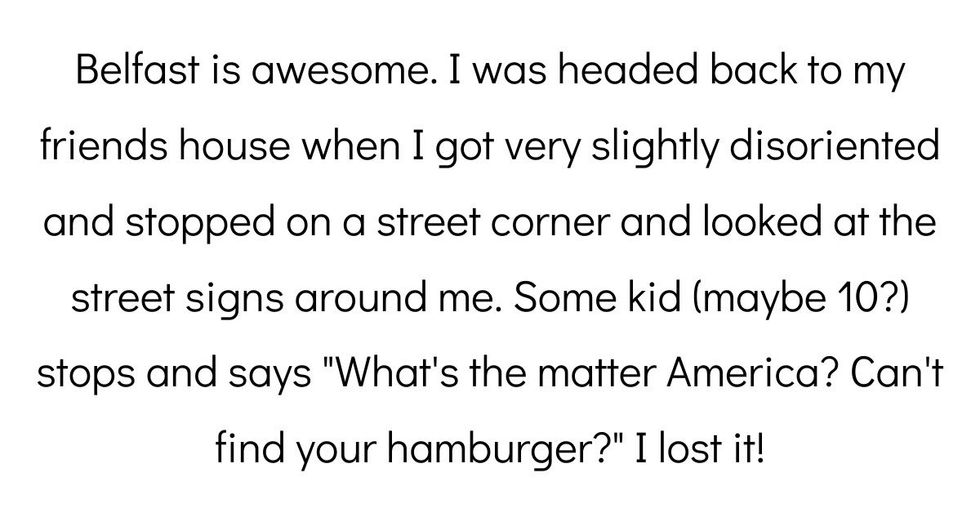 Traveling to other countries comes with a lot of culture shock. Certain things can leave an impression on you, and are different depending on where you go. But there are some things so strange that they can't be attributed to simply culture shock. And these Redditors experienced them firsthand.

u/Yokeyoyo asked: Redditors who have been out of their home country, what's the weirdest thing you've seen?

Not uncommon in NYC.

A man and woman in their underwear holding up a sign in New York.

I got called a f*cking a**hole by a 5 year old on a bike with training wheels in Belfast.

Belfast is awesome. I was headed back to my friends house when I got very slightly disoriented and stopped on a street corner and looked at the street signs around me. Some kid (maybe 10?) stops and says "What's the matter America? Can't find your hamburger?"

I just automatically replied "I'm Canadian" and the little sh*t didn't lose a beat. He came back with "You're really lost then, we don't even have a maple syrup shop."

A long ways away.

Not seen, but heard because I was asked what part of France I was from.

EDIT: I was in San Diego.

At least he looked the part.

Late one night in Shinjuku, Tokyo, I witnessed a Japanese pimp screaming at a prostitute a solid 8" taller than him. He looked like the stereotypical pimp, from the fur coat and cane right down to the Cadillac. It blew my f*cking mind.

I'm not sure which parts of that I'm most surprised about hearing from Japan.

Just what the world needs.

Beer in bags with straws -- Mexico.

You mean my adult Capri-Sun?

Tanks casually rolling down the street and guys with machine guns patrolling in Zihuatanejo, Mexico. They tell you to not leave the town because Guerrero has a lot of cartel activity.

The first thing I noticed about Iceland when I left the Keflavik airport was the near-absolute lack of trees. The whole island has almost no trees. I'm from Appalachia, so that was really odd for me.

That's one way to sell.

I was walking down a street in Thailand and a hooker on the other side of the street yelled "WON'T SOMEBODY COME F*CK ME?"

Walking down a street in Mannheim, Germany and had an older man pull up near me on a bicycle. He rang his bell twice and very directly looked at me and just said, "Hübsch." He then rode off casually ahead of me.

Chinese toddlers wearing pants with no butt. The world is their potty....

Ah yes. I remember standing in line for tickets to some attraction in Beijing and the mother behind us picked up her toddler and held him over a trash can a few feet away while he took a dump. Nobody batted an eye.

A blackout drunk dude in a train in Japan with his wallet full of cash and phones on the floor. When the train was getting full of working dudes and students they just asked him to sit up straight. He didn't lose his stuff and didn't really cause trouble. This was a Thursday morning.

I was in Tokyo in September. I saw bicycles just propped up against posts and the like. No locks. And people mostly don't pay with plastic, so they tend to carry quite large amounts of cash. Japan is mostly a very safe place.

I was down in Guatemala and saw a family of 5 riding a single motorcycle.

That would traumatize me.

Cuy in Peru. Aka fried guinea pig on a stick. Especially when there were batches of them being waved and set up by people on the side of the road trying to sell them. It's not just the meat either, it's the entire body including all the limbs with the pole stuck through its mouth. I learned about it in Spanish class so I wasn't too shocked but my family was.

Travelling on trains in Europe, there were many instances where European teenagers spoke in their mother-tongue but swore in English. So you would hear the English words fu@k, cu$t, shit, a$$hole etc sprinkled into the conversation.

Milkshake in a bag?

It's very typical in southern Mexico to get a plastic bag as the default "to go" drink receptacle for juice or sodas. When I went to Guatemala tho, I was a bit thrown when they gave me a milkshake in a bag. The tp is also all recycled and quite scratchy.

There are several, but the first that comes to mind is the flyers from the hip-hop club in the town I was living in in Germany. It's not like there was a military base nearby, so the whole Germans/hip-hop thing seemed incongruous. Fridays were theme nights at the club, but whoever thought them up didn't quite have their terms down right. My personal favorite: "Afro Centric Boat Party".

Also, in Miami which isn't technically out of my home country (the US) but might as well be: while moving into grad student housing I saw smoke coming out of the window of the apartment below mine. There wasn't a ton of it, but there was enough that I thought something might be wrong so I ran downstairs and banged on the door. When the door was opened I saw a couple about my age and an older man dressed all in white, glaring at me. I had interrupted a Santeria house-cleansing ceremony.