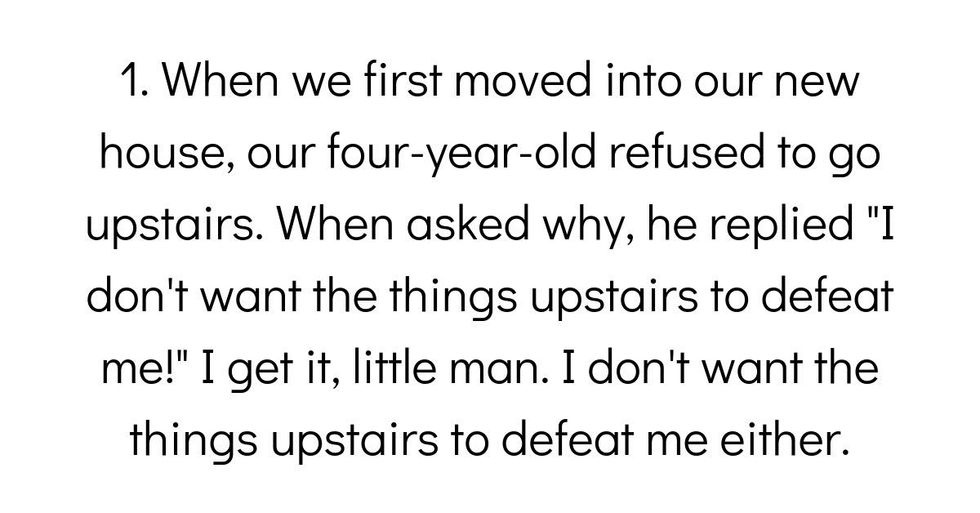 Parents Share The Creepiest Thing Their Kids Have Ever Done

At least they're not the kids from 'The Shining.' Or are they?

Kids are weird. Well, truthfully, all people are weird. So it's good to notice the signs when we're young. Sometimes kids say crazy things and often they're a bit off kilter. As a parent, you have to watch for the signs, we have live amongst these people.

Redditor u/finalgumgum wanted parents out there to admit difficult truths about child rearing by asking..... Parents of Reddit, what is the creepiest thing your kid(s) has ever said or done?

I overheard a girl tell her mom, "Her eyes are pretty," referring to the new daycare employee, "I wanna wear them on my charm bracelet." Lokis_thor-obing_ass

My cousin who is three, he keeps referring to any woman he sees as "tasty." We would be watching a movie and he would point out a woman and says "she is tasty." What he means is that she is beautiful. I can't even walk with him outside because I am afraid he might point out to some woman and say that she is tasty. SubSahranCamelRider

Off with your head!

I was napping on the couch and my then three year old was standing there with a toy, felt saw. I woke up to him saying "I'm going to saw mommy's head off!!" Uhhhh....nope. 1982wasawesome

On a long drive through central/western Pennsylvania (all farms & hills or forests & low mountains), my 5yo out of nowhere says, "this will look really cool as a wasteland. you know, after everyone dies."

As much as we asked, he didn't elaborate on that.

Alone with my 4 year old midwestern daughter, when she randomly whispers, "Ope... she's here." While staring out a dark window.

My 4-year-old likes to play this make-believe game where she is having a baby and needs it "cut out" of her (we have never explained to her what a C-section is). Then the baby always has some sort of deformity, like no eyes or arms or something, and she needs to try again to have a better baby and she is just going to throw the bad one out.

My wife and I have refused to play this game with her once we noticed the pattern, but now she is drafting her younger sister into it and they love it. I'm torn between making them stop or just being happy they're playing so nicely together. PorkchopSquats

My niece and nephew were 13 and 15 at the time and we were watching them for my brother in law while he was out of town. At about 3am i get shaken and awake to two visibly upset teens who start sobbing about a dead woman trying to get in my nieces bedroom window. This jolts my husband out of bed in a hurry, he grabs his handgun and tells me to stay with the kids. They live in a mobile home that sits on risers, so this window is roughly 9 feet at its base.

He goes down the hallway and i hear him shout, "WHAT THE F*K?!" and run back to the front door and outside. Now the niece and nephew are losing their minds, not wanting their uncle getting hurt so i call the cops and walk to the door to see whats going on.

The dead woman was in fact a woman hopped out of her mind on who-knows-what, naked, and she did very much look like a corpse. She had been standing on the roof of my truck, trying to see in the windows. OnceUponWTF

So, my son and I stood watching his then 2 yr old daughter as she stood looking, laughing, and chatting away in toddler jibberish at... nothing... in a completely empty hallway. We just watched her and looked at each other with a WTF look on our faces.

Same granddaughter, some years later, still sleeps with me when she visits because "that girl" scares her. That's all she'll say because evidently the girl told her not to tell anyone about her. TJC528

When we first moved into our new house, our four-year-old refused to go upstairs. When asked why, he replied "I don't want the things upstairs to defeat me!"

I get it, little man. I don't want the things upstairs to defeat me either. Kindredbond

My husband is a farmer. One night he asked me to pick him up after working ground and it was pretty late, around 10 o'clock. So I loaded our two girls up-then 4 & 2 and headed to the field.

We get to the field and C is finishing up his last round so we had to wait for a minute. I rolled the windows down in the van and shut the engine off. After a few minutes my two year old says, "Mommy, who dat man outside?" I said, "I don't see a man, is your ken doll on the floor?" my 4 year old then piped up, "He's right outside your door and staring at you. He's scary. He has blood on his face."

That's when I turned the key, rolled the windows up, locked the doors and called my husband and told him to hurry the hell up because the girls are terrified and there's apparently a scary man outside my door that I can't see but both girls are describing him and what he's doing.

Thankfully C was done and heading up to the van at that moment and we left. My girls are now 5 and 7 and they both still remember that man and refuse to go to that particular field. I have to ask my MIL to watch them when I need to pick their daddy up from there. schuser