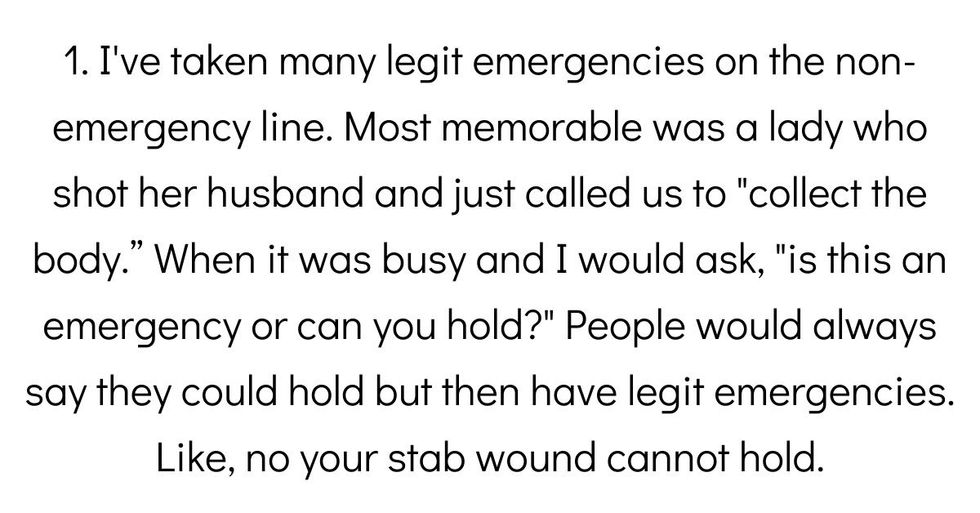 You'd be surprised by how many people call the non-emergency line for dispatchers, and tell them about, well, actual emergencies. Seriously, these guys don't get paid enough for the crap they put up with. Here are some of their most insane stories.

u/SirBean21 asked: Dispatchers of reddit, what calls have you taken on the "Non-Emergency" line that definitely was an emergency?

I've taken many legit emergencies on the non-emergency line. Most memorable was a lady who shot her husband and just called us to "collect the body."

What always shocked me was when it was busy and I would ask, "is this an emergency or can you hold?" People would always say they could hold but then have legit emergencies. Like, no your stab wound cannot hold.

I often found that in shock people tend to get hyper focused on one detail and leave out vital ones.

Not a dispatcher, but got a call about a noise disturbance from a farm at the edge of city limits. Turns out a party had gotten highjacked by a tweaker who thought it was a good idea to break in to a house full of teenagers. Turned into a 3 hour hostage situation. Guy crashed when the drugs left his system, nobody got hurt.

That's kind of a big deal.

Last night someone called our non-emergency line because one of their family members wasn't breathing at all. Got a little blind-sided by that one.

I mean for a lot of them I get the thinking. Already happened, not much to do, not an emergency anymore.

But how the hell do they not see one of their family members dying not as an emergency?! What is an emergency to them?

How did they even get that job?

I used to work for 111 (which is the non emergency medical line here in the UK).

I once had a call from a carer for an elderly lady, who was wheelchair bound and pretty much immobile. Upon taking the call, one of the first questions I ask is "can I possibly speak to the patient?" which is normally a quick yes or no. The carer hmmm'd for a good couple of minutes before deciding no, I couldn't speak to the patient. Her reasoning? The patient couldn't breath and was turning blue...

Not the smartest moment.

A friend and I were walking my dog past a local elementary school over winter break when we thought we heard a fire alarm ringing and faintly smelled smoke. We figured we were both just overimaginative, since nobody was around or seemed to be concerned. An hour later, as we were walking back we passed the elementary school again and the alarm and the smoke smell were still there. We decided to call the non-emergency line since nobody else in the surrounding neighborhood seemed to have noticed anything and we didn't want to look like teenagers pulling a prank. Operator answered and after we explained it to her she said "wait, you're telling me you think an elementary school has been on fire for the past hour and you didn't consider that an emergency?"

The fire was pretty small, and there was no structural damage, but yeah that was not a smart moment. I've never even told my mother that I'm one of the unnamed sources that alerted the authorities to a fire in a local elementary school. It is a secret my dog and I will take to our graves.

I work in emergency road service. I got a call for a lockout where a disabled woman was locked inside her car because of electrical issues. Because she had some kind of electronic assistance for getting in/out of the car, and the car was dead, she was stuck. It was snowing to beat the band and non-emergency response times were 4 hours. It was 20 degrees out. I told her to call 911 and she absolutely refused to do it.

It's usually old people. "It's not an emergency but I fell 10 hours ago and have just now been able to crawl to the phone, just need some help getting up, on and please don't have them using all their lights and sirens I don't want to wake the neighbors" or "Oh I'm just having chest pain and can't really breathe right, just want someone to come check me out" Or "My husband hasn't been able to have a bowel movement is a while and now he's having really bad stomach pains"

They usually down play things that can go really really bad for them really fast, I think they feel embarrassed or like they don't want to be a nuisance.

That took a turn.

One of my instructors in AIT told us a story about how they were responding to a call where the patient was complaining about chest pain. For obvious reasons, he and the other EMTs were preparing for some sort of cardiac issue. They get to the scene just to find out that the patient's chest pain was due to the gunshot wound in his chest.

This technically doesn't fit your criteria, since chest pain is also an emergency, but I figured it fit well enough.

Almost 10 years in 911 here. I think it's about a 50/50 split for emergencies take on 911 lines versus non emergency admin lines. Shock does really weird things to people. And some people panic and call in "emergencies" that aren't emergencies to any rational person, but the caller isn't thinking rationally.

I've taken calls for suicide by firearm, rollover accidents, and house fires on non-emergent lines only to turn around and answer a 911 line for something like "my neighbor's dogs are barking and won't shut up."

Not a dispatcher, but I called about a lost dog near the beach one summer. The dispatcher asked if it had a collar, what breed it was, etc, and we eventually realized it was a coyote. For bonus points, when animal control and the cops showed up they told me it had rabies. Thankfully it was early enough nobody was at the beach yet.

Fire dispatcher here. I handle dispatching for the 9 fire departments in the township, I don't dispatch police or EMS or take 911 calls.

One night one of the firefighters from my station calls the dispatch desk to have a friendly chat while he's driving home. The second he turns the corner onto his street he starts screaming "HOLY SH*T ITS ON FIRE!! THE WHOLE HOUSE IS ON FIRE!! SEND THEM HERE NOW!!"

Didn't give me the exact address so I had to call him back. Eventually got it and dispatched the fire department. But I'd be lying if I said I didn't almost sh*t a brick.

Not so talented there.

After I left the army I worked weekends as a paramedic while in college. We got sent out to a call for a "drunk person passed out in the yard".

My partner and I arrived at a frat house to find no one in the yard. We knocked on the door and were quickly rushed to a room where a yelling drunk person was laid on a pool table with a knife through his hand.

Apparently they had been throwing knives at a wall and one of the guys was "really good", and on a dare the injured person put his hand on the wall for the guy to throw it between his fingers.

He wasn't that good as it turned out.

What was the thought process there?

Not a 911 operator but I worked at an ER for a year at the front desk check in, graveyard shift.

I've shared this story before but on a different username I've since deleted I think.

An older woman called me, meaning she bipassed TWO different automated operators telling her to hang up and dial 911 if she was having an emergency.

Nope, she went on hold and listened to all the operator options/greetings to tell me her husband might be having a heart attack. He had all the classic symptoms I asked her about, so I had to tell her for at least the third time that night to hang up and dial 911. (I made sure she knew to tell them her address and did my best to see that she was fit enough to communicate with 911). Just crazy that logic goes out the window for some people in situations like that. She was way too calm and also hadn't done any research into her husband's condition. I asked her "What symptoms is he having that makes you feel he's having a heart attack? Is he having chest pain or shortness of breath?" And she replied, "Oh...I don't know... I'll go ask him." (?!?)

People that revolve around gangs/drugs/guns a lot, know to get an ambulance for a gunshot wound by saying they have "chest pain", whereas if they mention gunshot wound, most cities send a police car with the ambulance or even instead of the ambulance.

I asked him how much black smoke. He said a lot, and that it was filling the room and getting hard to breathe.

I informed him that something was almost certainly on fire, that he should pull the fire alarm and evacuate the building. He said "Okay, I just wanted to be sure."

Epilogue: yes, there was a fire and the fire department put it out.

People Explain Which Things They've Accidentally Conditioned Their Pet To Do