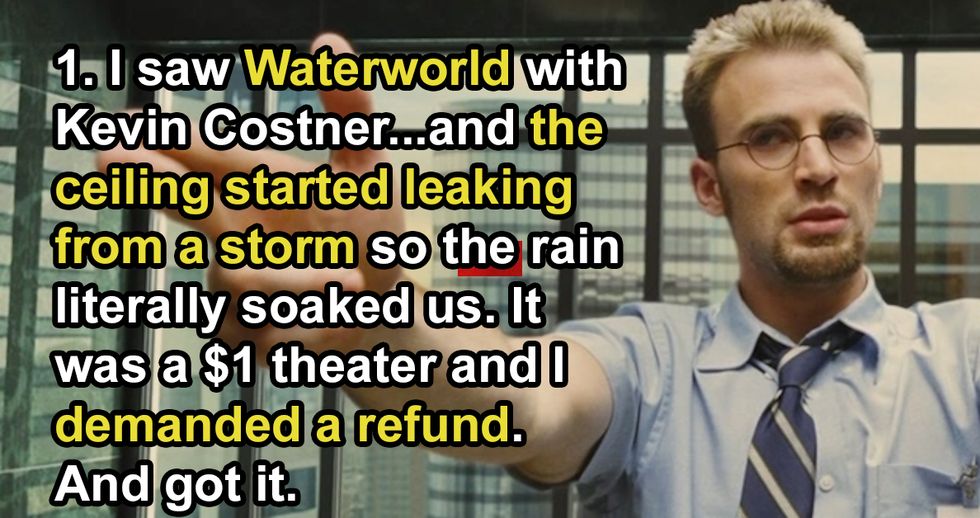 ZERO STARS ALL AROUND.

USE YOUR INSIDE VOICE!

THE THEATER AIN'T A ZOO!

THE SPIDERS CAN'T HEAR YOU!!

[rebelmouse-image 18978654 is_animated_gif=
From Your Site Articles

It's a rich man's world.

Hell, it's going to take millions just to grab gas.

So at this point... what wouldn't we give away everything for it?

Free money is one of the most potent allures in life.

RedditorElixir_Jxwanted to hear about all the things we'd be willing to deal and dish out for a massive payday. They asked:

"What are you willing to give up in exchange for 10 million dollars?"

People Divulge Who They Would Like To See Become President

Every president has faced scrutiny for how they have led the country–or failed entirely at succeeding.

People Break Down The Worst Responses To 'I Love You'

So, let's say you've been seeing someone exclusively long enough to know you're not interested in pursuing anyone else.

You feel a mutually amorous connection that is undeniable. You work up the courage to finally open up your heart to say those three words you've held off expressing for quite some time.

To Kill a Mockingbird, Lord of the Flies, Catcher in the Rye.

Books are often found on the list of the greatest novels ever written.

But they are also commonly found on the list of books most people had to read in high school.

Which doesn't mean they aren't among the greatest pieces of literature.

But more often than not, people find the books that turn out to be their "favorites" not because they were assigned to them, but because they chose to read them for their own enjoyment.

Some people’s favorite reading material might not even be a don't even need to be a novel or biography, but rather a juicy blog or message board.

A Recent Redditor was curious to hear what books, or other reading material, the Reddit community believed demanded to be read, leading them to ask:

'What should you read at least once in your entire life?"