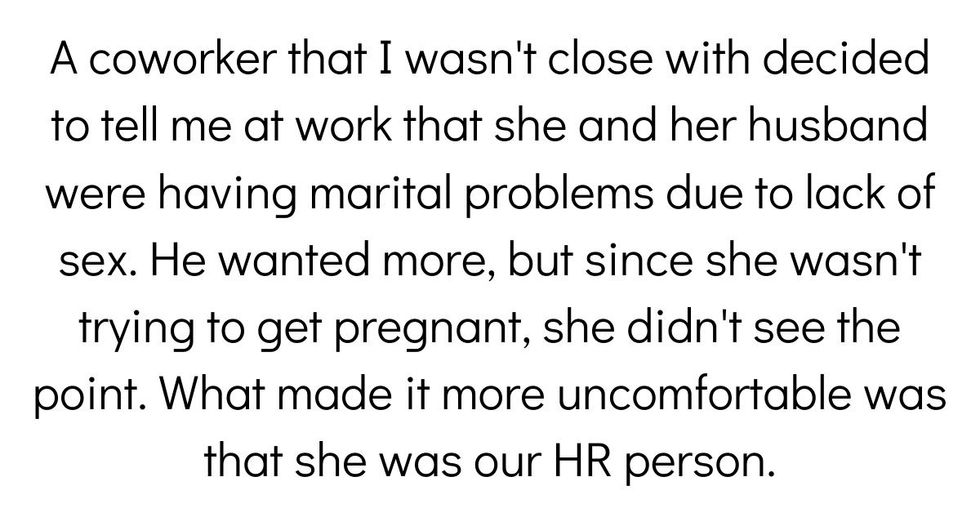 We've all been there. A conversation is going fine and suddenly you're thrust onto a runaway train. And the train is really gross and horrifying.

I don't exactly know what is going through people's minds when these moments of hyper-honesty occur. Maybe you have a face that just screams trustworthy. Maybe you're simply unlucky enough to pass through a person's life at the exact moment when they absolutely cannot go another second without getting this weird thing off their chest.

Either way, these people and these moments aren't going away anytime soon. Best thing we can do is read about when others have been thrown the TMI hot potato and hope that at least yours wasn't THAT bad.

u/ijustwantedtoparty asked, "What weird thing did somebody tell you that they shouldn't have felt so comfortable telling you?"

Ya Know I Was Curious About That

I see my mechanic a like 5 times a year and he always tells me how many asian girls he met online and had sex with since we last met. Its like an unprompted tradition he must get past before we can talk about what's wrong with the car.

Gotta Be A Better Way to Do That

Where it All Went Down

I was going to a summer cottage owned by my work. Upon hearing that, a coworker of mine informed me that his daughter was conceived there, in the very bed that I was about to sleep in.

Did not need to know that,

My 89 year old grandfather told me his and his wife's favourite sexual position. Number 1 on the list of things I never ever needed to know.

Sitting with my fiancé's new friend and she starts bragging to me how she's been manipulating men including my fiancé into doing things for her. (Picking up her paychecks for her, babysitting her son while she goes on a date, cleaning her place for her etc) Then she started showing me these long messages she'd send to guys she had just met on dating sites telling them how my fiancé was her best friend and her standard for guys.

That he considers paying a hooker to lose his virginity. It was back when I worked in retail, and he was a co-worker. We didn't talk much, only a couple of words, and only about work. Then one day he came to me, and dropped this bomb.

At first at though he was joking, and tried to laugh it off, but he was dead serious. He also wanted to hear my opinion, but I told him that this was not a comfortable conversation for me.

Later another co-worker told me he tries to talk about this to all female workers, and he hopes that one of us would offer him to take his virginity, so he doesn't have to pay.

All These People Talking About Incest Like It's Chill

An ex-coworker, whom I barely knew, told me she was in a sexual relationship with her biological father.

They had been together for about 10 years, and moved to a new city together. She was only 25 or so.

Of course I kept that story to myself, but damn.

A kid I was sort of friends with in high school told me that he regularly had sex with his twin brother.

For the record, he had no history of ever being sexually abused, and from what he talked about, it was mutually suggested between the two.

They were just gay and into incest.

Managed a restaurant and a man was there to service the building, HVAC or something. He seems anxious and starts rattling on about his girlfriend and then her brother and how said brother fu*ked a cow... immediately apologizes, "I don't know why I said that, I probably shouldn't have told you that, sorry."

Takes Commitment. Proud of You, Sis.

My sister told me she was getting her tonsils out, so that she would give better head.

Time to Review the Policies

A (strange) coworker, whom I wasn't ever close with, decided to tell me at work - across the entire office - that she and her husband were having marital problems due to lack of sex. He wanted more sex. But since she wasn't trying to get pregnant, she didn't see the point and said he needed to get over it.

This happened loudly, out of nowhere and with no prompting. What made it more uncomfortable was that she was our HR person.

Working on a assembly line, a girl I had to work next to that day explained to me why part of her shirt was yellow and wrinkled. The yellow part was cat pee, it's wrinkled cause she sleeps in it. And hasn't done laundry in 2 week's...yes she smelled and yes I told her she did.

Gotta Be Against Some Policies

Next girl working with me confessed that she slept with 50 people at work. Married, has 3 kids, not sure if kid #2 and #3 is her husbands. Then told me not to tell anyone, I barely knew her, but I'm sure people all ready knew this about her. There were less than 300 people working at this plant, that's including 2 shift's.

business partner of my then boss, that had just introduced himself to me:

nice team you've got here. we should all go on a trip to thailand together. you can fuck prostitutes without protection over there! they all have documents from their doctors showing that they're clean!

Cashier at St. Louis Bread Co. informing me she's on her period and flowing very heavily. I get it, I'm a fellow woman, but damn. Its a restaurant.

Getting Off His **Chest**

My coworker told me that he has had flare ups of gonorrhea over 30 times, he has herpes, and god knows what else. He said he can't remember how many times he's had a q-tip swab in his d*ck hole. He doesn't believe me that I've never had an std and is constantly bringing it up. I don't know what compels this man to constantly talk about STD's but he must have a forest fire going on down there.

My coworker went into great detail (including a hand drawn diagram) about how constipated she was after one of her c-sections. She said she was so uncomfortable that she asked her husband to try to dig some of the poo out of her butt with his finger. So she put a towel down on the bed, laid on her side, and he got to work. After some successful digging she rolled over and noticed a butter knife on the bedside table and asked what it was doing there to which he responded "well, it was too hard for my fingers".

People Break Down The Dumbest Thing They've Ever Heard Someone Say