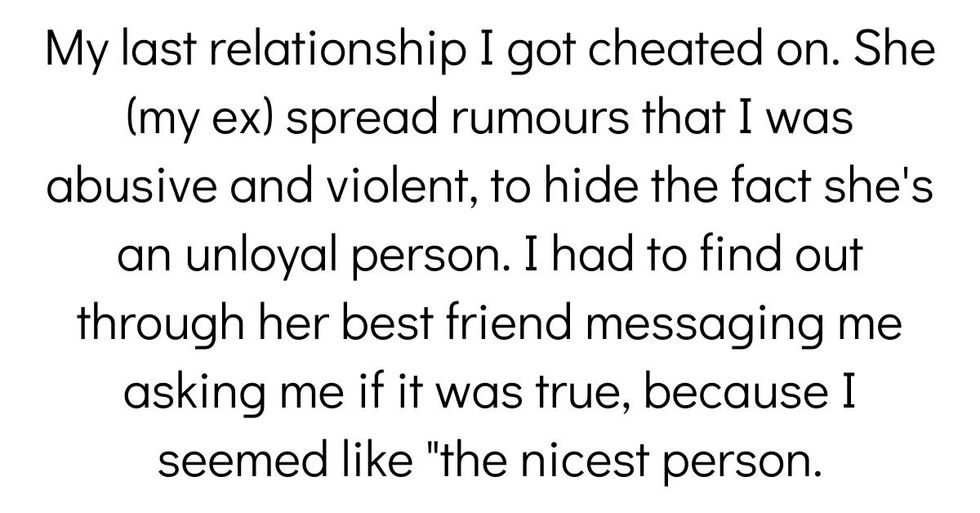 Guys Share The Scariest Part About Being A Man

Being a man can hold a lot of fear and uncertainty on its own. While they are expected to not show emotion, and are forced into the cycle of toxic masculinity, they have to deal with a number of internal struggles. Here are some of them from the men of Reddit.

u/Gullsko asked: Men of reddit, what's a thing that can be scary about being a man?

It is terrifying how lonely middle age is. I can absolutely understand why so many middle-aged men commit suicide. I'm actually trying hard to get out and meet people, but it's difficult. I'm an outgoing guy, and it is hard to form friendships with other guys. Then I imagine how all the socially awkward men just don't even bother any more.

Why is this even an expectation?

Being expected to make the first move always gets me super anxious. I hate the idea of misreading a situation, or making a woman uncomfortable, so I tend to "disregard" a lot of obvious hints when I first start seeing someone.

This is so sad.

When I was a teenage boy, my sister fell into a river. My dad put his hand on my back and pushed me in after her, saying "go get her". Her leg was stuck on something but I got it free and she swam back to shore. I, however, was pinned by branches under the water that had somehow gotten around me (there was a whole tree under the surface). I remember looking up to the water's surface and seeing the silhouettes of my family members walk away from the edge and thinking "no! wait!".

Long story short, my fight-or-flight system kicked in and I scrambled as hard as I could to free myself and eventually got free and came up to take the best breath ever. When I was crawling back on the sand, my dad, sister and brother were about 100 yards down the bank. He turned and said, "c'mon!" and I hurried after while gagging on water. That about sums up my experience so far.

People just expect you to be "okay" in obviously dangerous situations. I knew guys who drank themselves to death because liquor is easy but saying "I need help" is hard.

My last relationship I got cheated on. She (my ex) spread rumours that I was abusive and violent, to hide the fact she's an unloyal person.

I had to find out through her best friend messaging me asking me if it was true, because I seemed like "the nicest person", and she wanted to know the truth. I explained and she was shocked. I was shocked. I didn't think she'd stoop lower than she had done already.

I'm lucky no one took her serious enough to contact the authorities.

I am pretty young, but somehow, this sh*t still happens. I was playing with my sisters at the park, and we were playing tag. At one point, this middle aged lady comes up to my sisters and asks if they know me, and how they know me and whatever. I come up to her and say, those are my sisters, and she just gives me the stink eye, ignores me, and turns back to my sisters and keeps interrogating them. It was only after my mom came to see what was going on, that the lady left.

BTW, I'm in middle school, and have been mistaken for being 11 years old, so I don't know what that lady thought I was doing.

I don't know if it is actually "scary" for me, but awkward and something I overthink.

I am over 6'5", can kind of come off as intimidating do to that alone, but am really just a teddy bear. At my job, I have to walk through a dark alley in a downtown area, to get to the parking lot.

Lots of times, there are women walking back to go to their cars as well, and then my lumbering loner self is walking behind them. I feel awkward and scared they are going to think I am going to hurt them or am going to rob them or something. I'm just trying to get home!

I follow farther behind, always act as inconspicuous as possible, which probably makes me more suspicious, get on my phone like I am texting or act like I am calling someone so they can here I am far behind them and not stalking up on them.

Maybe it's just my social awkwardness or the fact there is a lot of crime that happens in our town, but I don't want to be seen as a threat by people I would never hurt.

Everyone expect so much of you and feel they owe you nothing. You must provide, you must defend, you must be solid as a rock and yet know how to deal with people in the most respectful and submissive way otherwise you will be the jerk.

In all situations if you are a man you will never be the victim at first, and if you are shame on you because you were not strong enough. You are responsible for everyone but no one needs to worry about you. Two man fighting? Both stupid, violent man just doing toxic men things. The reason for the fight does not matter, there are no victims here.

And then the loneliness. No one wants to be friends with you. I mean, as far as we know any man is a potential rapist, robber or killer, right? It is OK to discriminate man because they can handle it like a man, can't they?

You're pretty much on your own.

Less of your problems are taken seriously, you're seen as weak if you can't sort them out. You're expected to throw yourself in harm's way at a moments notice.

The courts look at you less favourably, so does a large portion of society. You're seen as a potential rapist and child molester. I love kids but God forbid I smile at one in public.

You're the one who has to be able to sort everything out, even if you sometimes feel like just curling up in a ball and crying.

This is too real.

Speaking on behalf of my husband: the sheer expectation that he can shoulder everyone's stress. If you are a man with emotional intelligence, people will simultaneously act like you are both a rare unicorn, and that you must take that emotional intelligence and merge it with the "MEN CAN SHOULDER IT ALL" mentality.

This means he's utilized way too often by too many family and friends who don't make any emotional effort. He's asked to manage everyone's drama.

He doesn't, but the sheer expectation that he won't burn out simply because he's a man is hard to watch.

Your whole identity is wrapped up in your job. You weren't born to be a doctor, lawyer or entrepreneur? You must be some kind of loser.

Your industry is laying people off? You're definitely a loser. Your fault for choosing the wrong major twenty years ago.

The expectation that you have to deal with violent or dangerous situations. When I was a teenager at school, a guy in our class took a girl hostage with a knife in an unoccupied room. Our teacher was a woman, and literally grabbed me by the collar and shoved me into the room telling me to get the knife off of him. He attacked me, and in the chaos the girl managed to get out of the room. I couldn't though. I was stuck in the room with him with a cut on my chest. But it was ok though! Don't worry, because the girl had gotten to safety. The teacher even got a reward from the cops for her "quick thinking".

Even now, as a doctor, when a dangerous patient comes in its automatically given to me (the other registrars in the unit I work in are mostly women) and I get judged for having to have security with me.

I'm allowed to be afraid of being assaulted too.

Reading through these responses it's pretty overwhelmingly clear that most of these issues are caused by toxic masculinity and our societies expectations of masculinity which are also toxic. Many women are afraid of men because so many guys are downright predatory. That causes them to suspect every man because sometimes you just can't tell.

Almost every woman has had experiences with guys like this and it's frickking terrifying. So guys, it's not your fault, and it's not girls' fault, it's the fault of those douchebags and the people who raised them.

Always having women being scared of you.

I may only be in 6th grade but I'm a pretty big guy, I'm 5'10 and I was walking to my brother's car (I go to a K-12 School and my brother goes here too) and there was this small-er chick walking in front of me and she looked scared out of her head, every time she looked back she had an even more scared look on her face until we finally got to the turn and she just turn around and started walking the opposite direction until I got to my brother's car.

This isn't even the first time this has happened, people in my grade are scared of me, you can tell by their facial expressions, we even have to wear uniforms at my school and they don't make them in my size so they can see how much of a fat*ss I am. I really feel that this is going to affect me a lot in my next stages of life too.

Rejection, always rejection. You are always expected to put yourself out there, be "The Man" and eventually you take the initial risk, and the higher the risk the worse you feel once rejected.

It can happen to men too.

That we can basically be accused of rape or sexual assault with zero evidence & almost every time, people will side with the accuser. It's scary that some random stranger, or even someone you know, can get pissed off, accuse you of something you never did, but others will rally to their side in support while demonizing you before any facts or proof are even provided.

People Explain Which Facts They Actually Regret Ever Learning