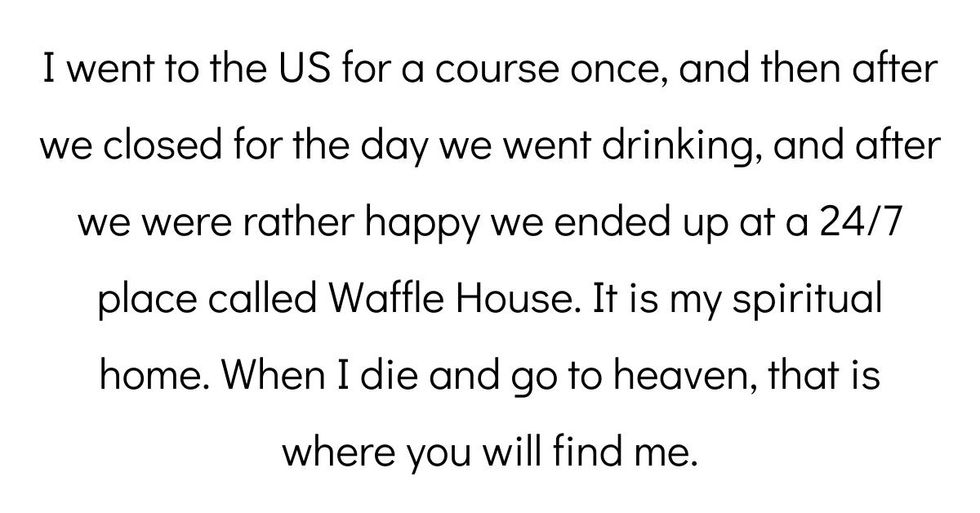 Being in the U.S., us Americans tend to take our food for granted. You can get cheeseburgers and hot dogs left and right here, but they aren't quite the same when you go outside the states. Here are some of the best American foods, chosen by people foreign to the United States.

u/Two_Cigarettes asked: Non US Redditors, what is your favorite US food?

Waffle House is the restaurant for the gods.

I went to the US for a course once, and then after we closed for the day we went drinking, and after we were rather happy we ended up at a 24/7 place called Waffle House.

It is my spiritual home. When I die and go to heaven, that is where you will find me.

Idk if it's American, but peanut butter.

I brought peanut butter to my host family in Argentina and they were STOKED.

Canada has some good stuff too.

Anything that Canada doesn't have. Walking into a grocery store in the US gives me so much happiness lol.

American here, can you give some examples of things we have in grocery stores that you don't? I'm curious.

A lot of health food surprisingly, you can't get in Canada. My wife does keto and when we just go shopping at like Target or Walmart, there are tons of specifically keto foods, where in Canada you have to either go to a specialty store at a higher price, get a limited selection, or buy online.

In general though, it's mostly variety. Like you guys will have a ton of pop flavours, chip flavours, or cereals that we don't get. Energy drinks too, we mostly only get Monster and Rockstar here, I haven't seen Bawls or Jolt cola in years.

Not a grocery thing, but fast food is vastly different as well, even for chains we do have. I would say though, that sometimes ours is better, or at least just as good but just different. KFC is probably the biggest example, it tastes vastly different, and there are so many sides available in the States. It actually blew my mind when I realized most KFCs I've been to in the States don't even have fries, it's like biscuits or maybe potato wedges (we don't get either).

And then the variety of fast food restaurants in general. We get all the major ones, but there are some other franchises we don't have like Shake Shack, Carl's Jr/Hardees, any Taco franchise except Taco Bell and Chipotle, and there's no such thing as a cheap BBQ joint up here, we have some, but they're always considered like on the same level as craft breweries.

Denny's is the best.

When I went on a family holiday to San Francisco (we stayed with some friends of my dad in Oakland), we went to Denny's for every breakfast for 2 weeks.

Every morning I would have American pancakes stacked up, bacon and sausages, all covered in like a gallon of syrup.

Edit: Lol quite a response! It was my first ever trip to the US from the UK. I'm 30 now and it was 15 years ago. We went to Denny's every morning because it was just round the corner from our motel. I don't remember where we ate for lunch and dinner but Denny's was only for breakfast and I ate a lot! Just to clarify, the Denny's breakfast was not the sole contributor to me gaining a pound everyday lol, at lunch and dinner I ate loads too.

But you'll be pleased to know that since then, I have been back to the Bay Area 3 times where I stayed in Berkeley and never had a breakfast in Denny's again or a big chain diner.

A Wendy's baconator I believe it's called...that's a powerful burger.

Anything that sounds like it's gonna travel through time to save the world's beef must be a hell of a burger.

Honey Buns. Good lord! They're so sweet, but PERFECT. I like them slightly squished. But, I'm not sure if that's because they've always come out of a suitcase, squeezed between clothes. I could eat 6 with a coffee.

Really!!! I just had to take a second and steady myself, what have you done? Lol

Meatloaf can be amazing.

Hamburgers, no doubt. There's tons of foods that I consider even more American that we just don't have where I live, like meatloaf and corndogs. I'm really curious about those.

Not really a food bit I have a mighty Reese cups habit.

Have you ever had the Big Cup? It is like a bigger Reese's Cup but with a higher peanut butter to chocolate ratio.

Learned how to properly do one last year and - Oooweee!

Deep fried Oreos are the BEST.

Corn dogs, or fair food, last time I was in the US I tried a deep fried Oreo, holy crap I was skeptical but totally worth it.

Reeses, no joke. love those buggers.

I was in the US when I was 17 and honestly, microwaved pizza is gross, why do you have that? But REESES, God help me, Reeses make me weak.

A Shake Shack burger for sure, the are so good.

Those burgers are heavenly.

In-N-Out burgers for sure.

Also creamy peanut butter. It's not a common food in France!

Chicken makes me cry too.

Fried chicken... idk if it's a US food or not but when I tried KFC for the first time I almost cried.