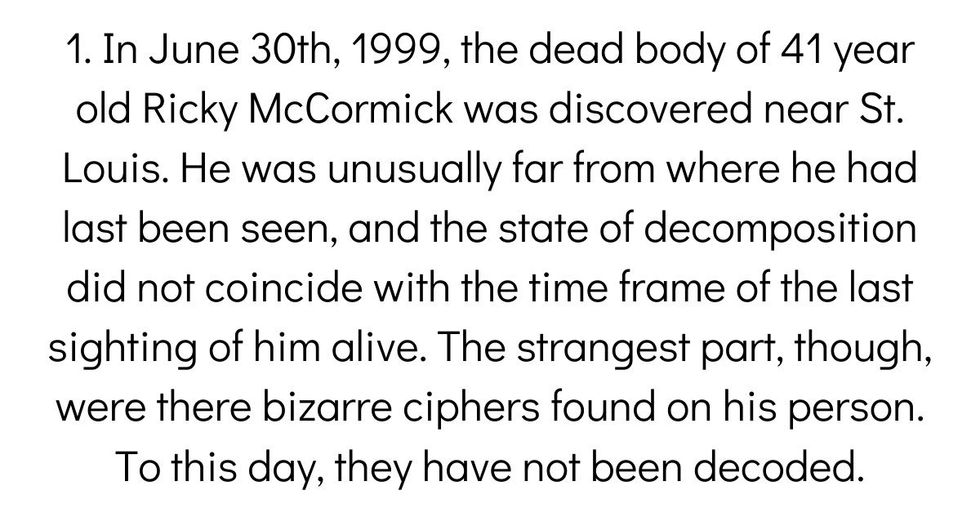 People Share The Craziest Unsolved Mysteries From Their Home Country

Every country comes with its own unsolved mysteries. Now, they may not always have a Robert Stack bringing these mysteries to your TV screen, but nonetheless they still exist. And thanks to the internet, we can share them with the world! Here are some of the best unsolved mysteries from around the globe.

u/WednesdayAddams_98 asked: What are some unsolved mysteries from your country?

Not to be confused with the American Black Dahlia.

The famous Black Dahlia Chinese case. A woman had gotten into a argument with her roommate. She said she would be back soon and wanted to go for a walk. She never came back. After several days an elderly poor Chinese woman sees a bag of what appears to be meat and thinks it's leftover meat from a store. She takes it however she notices a arm in the bag.

It was found out it was the missing woman. She had been cut to 1,000 pieces. Some body parts were partially cooked over several days. There's a graphic photo you can see where police pieces the cut up pieces together to make one big image of her. It's gruesome.

It's been 20 years and no one found her killer. Her sister is trying to find justice for her sister who was the first in the family to be in college.

In my country, more specifically Alaska, there is a long unsolved mystery of "sh*t snowmen" popping up in people's yards.

In uncorrelated areas, someone is breaking open septic tanks, grabbing masses of the frozen poopies, and creating apparently otherwise very well made snowmen.

On June 5 1960 two 15yo girls and an 18yo man were killed by stabbing and blunt strikes to their heads while sleeping inside a tent. Another 18yo young man, Nils Gustafsson, survived with bad stabbing injuries.

The murder weapons have never been found, but Gustafsson's shoes were found partially hidden in a hole between rocks approx. 1/2 km away from the murder site.

On the murder night two unknown men were fishing at the shore. They never reported themselves to the police and even left the fish they caught on the shore.

Modern DNA analysis revealed years later that Gustafsson's shoes had each victim's blood on them, and he was arrested in 2004. The case was declared closed by the National Bureau of Investigation in early 2005 and the trial started later that year, but in the end he was acquitted of all charges.

47 students went missing during a protest. It's kind of obvious the government did it but the bodies haven't been found nor we know exactly what happened.

What country is this?

I grew up in America my whole life but my Indian immigrant mother told me a story of how she heard how there are Alien Rock Paintings in Charama. Apparently, the nearby villages have stories of how 'Rohela' people would come and kidnap people, they came from small flying discs and would land from the sky. NASA's even been involved in helping figure this out.

Another one, again from India told by my dad, is the Nine Unknown Men, who are basically India's version of the Illuminati!

In 1966, two men were found dead in Niterói (Brazil). The bodies were found with no sign of violence and were laid down side by side in a "bed" made from palm tree leaves with their backs facing the ground. The bodies were wearing clean suits and raincoats and were already in decomposition. Next to the bodies there were a strange concrete mark, a bottle of magnesium enriched water, a sheet of laminated paper, a package of paper with basic electronic equations and a strange paper saying:

4:30 PM – be in the determined place. 6:30 PM – ingest capsules after the effect,
protect metals and wait for the mask signal*.*

The autopsy of the bodies did not reveal the "causa-mortis", there were no signs of violence, poisoning, organic disturbances and total lack of radioactive contamination, several toxicological exams were conducted, but all the results were negative. The two men, identified as Miguel José Viana, 34, and Manoel Pereira da Cruz, 32, lived in Campo de Goitacazes, and were business partners and radio technicians.

The 1970 WVU Coed murders. That write up is really good, you should read it.

Two WVU students, Mared Malarik and Karen Ferrell, are last seen exiting a theater on January 18th, 1970. They get into a cream colored Chevy and go missing. April 6th, 1970, the police get a letter with the supposed exact location of the two girl's remains. More letters come later. April 17th, 1970, the headless bodies are found in a tomb made from river stones and tree branches.

Police discover a local cult wrote the letters after consulting the spirit of a dead doctor. The cult is cleared of involvement.

Pedophile Eugene Paul Clawson confessed to raping and murdering the students, but later rescinded. His claims seem shaky due to, at the time, untreated Klinefelter syndrome, the apparent lack of sexual assault, and other evidence not matching Clawson's claims.

United States. Worked very close to the area this occurred, albeit about 7 years after the initial occurrence:

The case of Ricky McCormick. In June 30th, 1999, the dead body of 41 year old Ricky McCormick was discovered in a notorious "body dumping" area near St. Louis, Missouri. He was unusually (for him) far from where he had last been seen, and the state of decomposition did not coincide with the time frame of the last sighting of him alive (decomposition was more advanced than it should have been).

The strangest part, though, were there bizarre ciphers found on his person. To this day, they have not been decoded, and the chance that this individual, who could barely write his own name, had created a sophisticated cipher such as this was completely dumbfounding.

More detailed information on this unsolved case, and the complexity of the cipher, released by the FBI 12 years after his death, can be found here.

A family of five and their maid were brutally killed with a pickaxe inside their home on a farm in rural Germany. It's been nearly a century and nobody knows who did it. A series of odd events led up to the murders too: The father had reported his keys missing, he found a newspaper inside the house that nobody had bought, a former maid quit working for the family after she had heard unexplainable noise at night. Footsteps appeared in the snow leading towards the house, but not away from it, leading some investigators to conclude that the killer might have hidden inside the house and lived alongside the family for a while.

A detail I've always found particularly gruesome: The youngest victim, Cäzilia (aged 7), was found with clumps of her own hair in her hands. She had torn her hair out terrified as she lay dying next to the corpses of her mother and grandparents.

During the early colonial days of the US, a small colony was made in North Carolina. It's name was Roanoke. Colonial Life wasn't easy by any means, but Roanoke had it especially rough. They had extremely poor relations with the native tribes in the area and there was some trouble in growing and gathering food. So they had to be resupplied by ship. The captain of that ship Simon Fernandes returned to England to get them more supplies.

However he was delayed 2 year's by the Anglo-Spanish war (England was fond of war during this time). When returning he found the colony abandoned. All 121 (approximately) people were gone. No graves, no bones, and no corpses to be found at all. It was like the people evaporated. The only evidence as to what happened was the word "CROATOAN" carved into a tree. While that was the name of a nearby island, there was nothing found there either.

While it's believed the colonists assimilated into the native tribes for survival, there is no evidence of anything. Not even modern archeological techniques have uncovered any evidence as to what happened.