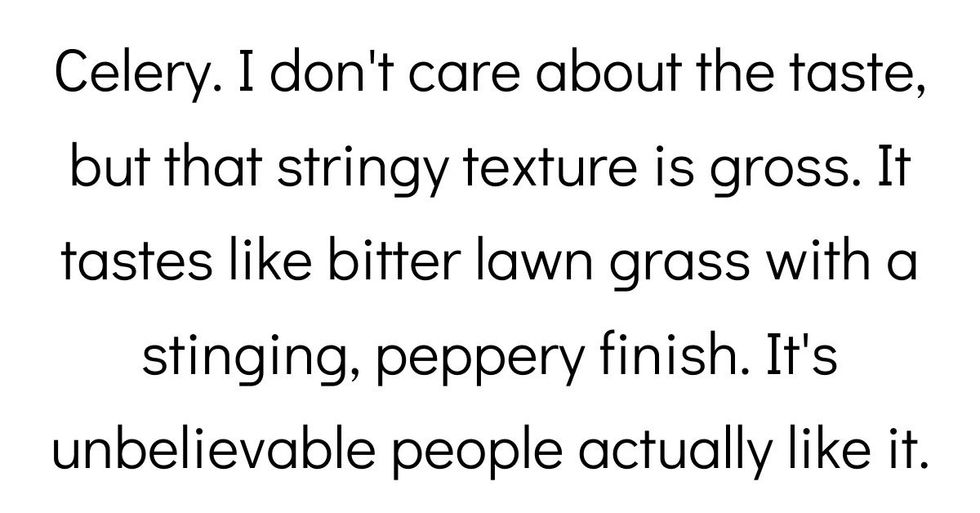 People Reveal Which Food They Absolutely Refuse To Eat

There are just somethings I will not put in my mouth!

Even if you're a diehard foodie there has to be a menu of options that sours the palette. Some foods, no matter how rare or delectable they are known for being just don't suit the intestines of everyone. Sometimes food reactions are linked to past experiences which renders them inedible due to triggers. And sometimes, some food, is just straight up gross!

Redditor u/Yahya_2000 wanted to see what foods are a permanent no for people's tummies by asking.... What food do you refuse to eat?

Anything that is still moving in the plate. BakonNigiri

Only correct way to eat Gagh. Don't complain to the chef that your Gagh is still wriggling. G_Morgan

Your description makes me want to Gagh. Goat17038

I'm pretty turned off on most organs (brain, eyes, liver, lungs, ect..) at this point. I've tried them a lot when I was younger, but it's a tough sell now. nightandshade

So in my country we have a soup that has horse's intestines filed with other organs, it's called ''Sopa de Manguera'' (hose soup) I live in Ecuador btw. HealthyMinder

Celery. I don't care about the taste, but that stringy texture is ugh. ButtholeSpiders

It tastes like bitter lawn grass with a stinging, peppery finish. It's unbelievable people actually like it. Polly_Peptide

Correct me if this is factually incorrect but I believe it was George Washington who once wrote, "Liver makes my nips quiver." SchneebsTheGinger

It tastes good but i hate being reminded that i'm eating duck embryo. NotSoRainbow

Skim Milk. It's water that's lying about being Milk. MMacKillop

Anything less than whole milk is white water. unopposablethumbs

Spoiled food and if I can avoid it- fennel. Bolzenschneider

No bigger turn off than thinking you just bought some kick a** breakfast sausages and they turn out to be like 20% fennel. I don't get it, like sure it can impart good flavors in a dish, but the actual pods are like chewing on a bath bomb.Daisypusha1323

No Yokes About It!

Eggs. For a really long time I loved eggs and ate them as often as I could. But one day I had the flu and ended up puking up the eggs I ate that day. Ever since that horrible day, the scent/taste/texture of eggs makes me instantly gag. It was one of my favorite things to eat. bohdiii

Tuna casserole. That's all my mother made growing up besides overdone roast on Sundays and overcooked spaghetti on birthdays. Won't touch the stuff I don't care how you cook it the smell gives me flashbacks. TinyTinasRabidOtter