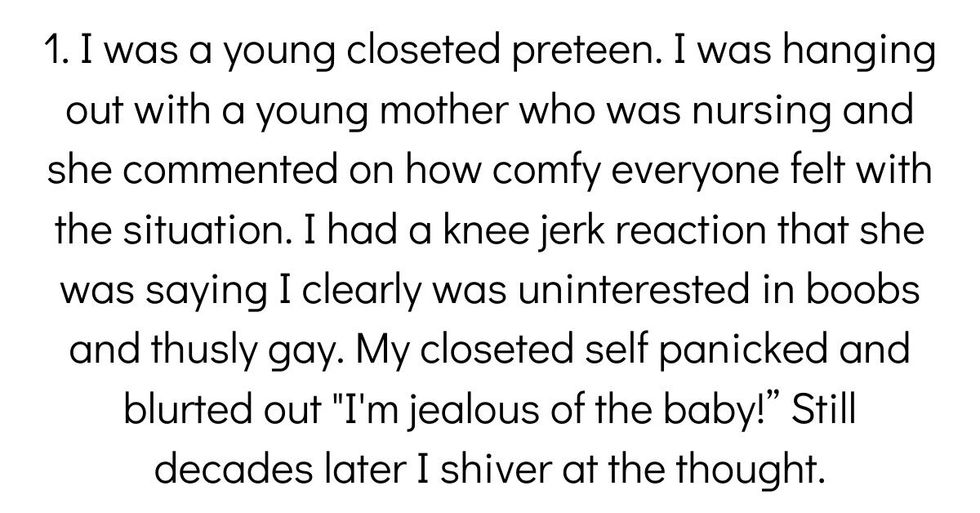 The cringe is so real...

Let's just cut right to the chase - we all do dumb stuff and we should totally talk about it. I'll start.

Once, I frustratedly yelled at my ex-husband that I had legs and could walk perfectly fine. I just happened to yell it while he was talking to a friend who was in a wheelchair because he had his legs amputated.

This was like fifteen years ago, the friend has since passed away and we're now-divorced... and I still lose sleep at night over just how much of a gaping jerk I must have seemed like.

In my defense, I was trying to walk to a store that was literally in the parking lot we were standing in and he kept pressuring me to drive. I didn't need to drive to a store I could see when I was already parked in the parking lot of the plaza! He argued about me walking for longer than it would have taken for me to actually walk!

Also, the friend gave me a well-deserved roasting.

What's that dumb thing you did years ago that you can't stop thinking about?

I'm glad I'm not the only one who loses sleep at night over this stuff. Makes me feel less alone, ya know?

About ten years ago I was strolling along eating lunch. I had half an egg sandwich in one hand, and the empty plastic shell in the other.

I walked past a rubbish bin and tossed my sandwich. I stood there for a moment looking at the rubbish in my hand, wondering how I could've been so stupid. There were two cute girls sitting at bench who saw what I'd done and burst out laughing.

It was so brutal. I must've replayed that f***ing incident a thousand times in my head.

I kicked a nun in the face on my first ever day of school. Had severe separation anxiety from my mum so sister Breda and my mum had a tug of war of sorts, or well, my mum was trying to hand me over, I was kicking out and um yeah, kicked her in the face.

I vaguely remember it, but whenever there's talk of first day at schools or nuns it all comes flooding back, she was a sweet old little lady, may she rest in peace, free from angsty four year olds.

This memory pops up every so often when I'm trying to get to sleep, you know the drill.

This happened in High School. After solving a math problem on an overhead projector I caught my foot on the power cord that was suspended just an inch or so above the ground. "No bigs" I thought as I tried to just step over it with my other foot. Nope, the other foot caught it too and I face planted HARD. As the pain, adrenaline and embarrassment just started to set in I heard the loudest crash. The overhead projector fell just after me and was completely obliterated.

The class had a good laugh, I uncontrollably blurted out "F*CK ME", my poor teacher was stifling his anger partly for my swearing and partly as this was the late 90s and the few overheads left from the 80s were in short supply and mostly all spoken for. He would likely be getting an earful over it.

The teacher then had the class take masking tape and outline where I and the overhead fell like some Law & Order crime scene from a rejected episode. This was a shared classroom so other classes came in and had no context. Things got added to it like "academic victim". It stayed there for the rest of the year and even ended up taking up a quarter page in the year book.

Excited About The Gays

I came from a small town in a rural state, then went to boarding prep school at 14, and my first day on campus I was in line for something and realized that this school really valued diversity - so I excitedly asked the people around me if there were gay people on campus, because I had never met someone who was gay

Both people actually turned away without answering me. There were gay people there, and they were really cool.

When I was a kid there was a girl who kept bragging to me how good of a swimmer she was. She kept saying how she could out swim me, hold her breath longer etc... I would ask her if she wants to race or actually challenge me in the pool but she would just say shes to good and refuse the challenge. So one day we're at my uncles annual family pool party and as a friendly joke I decided to push her into a pool but also to give her a chance to prove all the claims she was making (this was like a 5 foot deep pool MAX).

It was at that moment I realized she was full of it and actually had no swimming ability whatsoever. She started to drown and my cousin had to jump in after her to save her. I then received a scolding from my entire family for almost drowning this girl. The funny thing is everyone knew she couldn't swim except me and would just talk sh!t about how good she was for fun. And now you have me who looks like a monster. The kid who through a girl into a pool that everyone knew couldn't swim. -_-

I basically cat called a girl at work. I'm a straight female.

I worked in a restaurant so it was really laid back and everyone knew everyone. I also get really overwhelming, short bursts of energy as well as intense, short-lived, overwhelming adoration of people and I don't know why. The two do not always occur together, but this day they did.

So one night it was slow and everyone was closing up, and I literally /yelled/ at this girl how pretty she was from across the back of house. She then asked me to stop and that I made her uncomfortable. We already weren't very close and I had wanted very badly to be friends with her.

This was about 2 years ago (I am and was an adult, I just have no social skills, but I'm getting better). The past two days I have been obsessing over whether I should message her and apologize for my behavior, or not risk making her uncomfortable again and making an @ss of myself in the process of trying to gain forgiveness.

I was a young closeted preteen. I was hanging out with a young mother who was nursing and she commented on how comfy everyone felt with the situation. I had a kneejerk reaction that she was saying I clearly was uninterested in titties and thusly gay. My closeted self panicked and blurted out "I'm jealous of the baby!"

Still decades later I shiver at the thought.

I told my english teacher that the chocolate donut she was going to eat would give her a yeast infection.

I did not know a yeast infection meant what it means.

Knowing I had an audience (when I was a teenager) I walked prettily on the beach and danced over a log as it rolled away and I ended up fully clothed in the water.