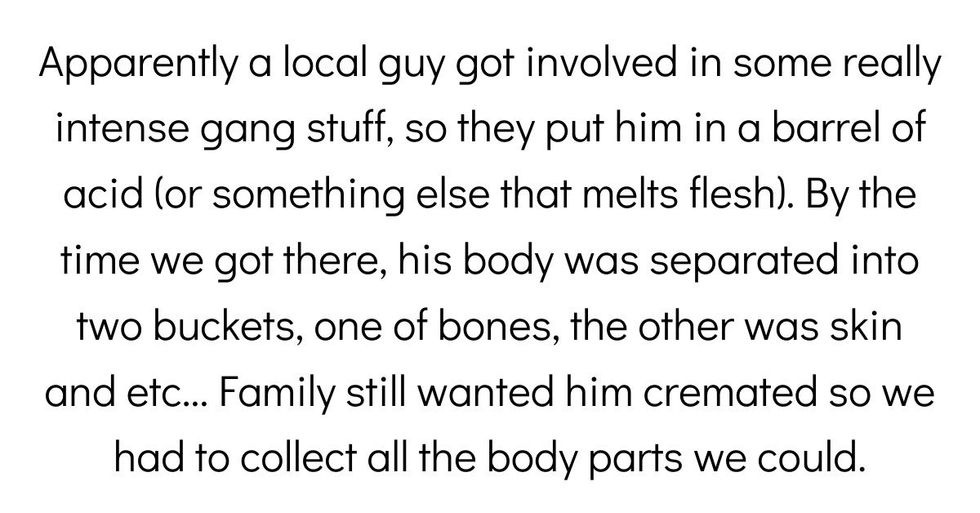 I will never unsee that!

Cleaning up after death and/or violent crime is a hardship. Yes it's good money but, it is a situation. Violence haunts you and you will see things you can never... ever... forget.

Redditor u/galaxybutton wanted to hear from the clean up crews out there by asking.... Crime scene clean up workers, what was your weirdest, grossest, or most spooky experience while on the job?

I worked with a few first responders who picked up a motorcycle helmet after and accident that wasn't.... empty. CulexKai

I worked as an EMT in South Dakota..

At least you got a helmet law there.... ihatetheplaceilive

There was a pool of blood on the floor.

I was called one day to the bathroom of a local popular pizza place. All it came over the radio to me as was an "assist ems" call, no details. So I get out before the medics and head to the bathroom to triage and provide first aid if necessary. What I found in that bathroom was something from a haunted house.

There was a pool of blood on the floor. It seemed like a liter or so. It was running out under the stall and into the floor drain. Other than that, dead silence....."hello, police is anyone here?" I called out. I jumped when I got a response "yes. Hi." He sounded fine, but the stall was locked so I asked "so what happened here?"

However during his time at the pizza shop, his sutures broke. Thus he was bleeding profusely...... from near his anus. So he rushed to the bathroom. Long story short EMTs got there and took him to the ER to have it reclosed and the employees of the pizza place were left with an unfortunate amount of blood to clean up. copnonymous

The mess sometimes isn't the hardest thing to clean. It's the "smell" that is. A few days is bearable for me. Anything past a week is impossible for me to be around without a mask. I can't stand the smell of decomp personally, but I've seen people eat snacks on a scene where a guy is melted into a couch. It's actually quite interesting and gross. When you die, your body leaks all of your fluids and "bloats" with gases (I want to say it's sulfur?) This also results with your skin turning black and beginning to peel off slowly as miscellaneous bugs begin to essentially feast on your body. If you're still interested I think Vox has a couple videos on YouTube about biological decomposition. CodePack

I remember listening to a podcast about crime scene cleaning years ago.

The one thing that stuck with me is that brain matter hardens like concrete and needs to be chiseled off the walls for things like shotgun suicides. Nebarious

One of my former coworker's husband is one. She told me one time someone died in a bathtub and they sourced strainers from to dollar store to get the remains out. KatesGivawayAccount

In another comment on a similar post a while back, someone told a story of a woman who had fallen in the tub while filling it up, and she couldn't reach the tap to turn the hot water off. They discovered her days later when someone else in the apartment complex noticed water seeping out of her apartment.

The commenter, who I believe was a first responder, said that when they found her, she was still alive, but when they tried to lift her out of the tub, her skin slid off her body. She didn't survive. shoopvedoobop

I have a friend that's been a paramedic for about 8 years. He said he's lost count of how many times he's had to respond to a call involving someone chopping their own penis off. Apparently, chopping your penis off is something that is common amongst people who are high out of their minds. And when you work in a major city, there are a lot of users.

I have another friend whose dad spent many years working as (I'm not sure what the correct job title is) one of those people who investigate locomotive related deaths. Essentially, he'd be called out when someone was hit by a train to locate the body, assess the scene, do paperwork, and have the body removed. He's seen a lot of really messed up stuff. And yet, he's one of the kindest, most humble and soft spoken humans you'll ever meet. Such a wholesome man who is really joyful despite all the stuff he had to deal with regularly for years. Thankfully, he's retired now. Reddit

Not me, but a guy I worked with at a summer firefighter job told me about finding carbonized bodies that had been trying to reach the door. Well, it was a bit of a sad case - he had brain damage from having almost drowned at some point in the past, and was a little bit slow. I never knew if he just had mild aphasia or something deeper. I don't remember his name so I can't google or Facebook him... I mean the firefighter guy of course. axnu

Im a mortician, we work along side of crime scene cleaners, this particular situation i found myself cleaning more than them, apparently a local guy got involved in some really intense gang stuff, so they put him in a barrel of acid (or something else that melts flesh). By the time we got there, his body was separated into two buckets, one of bones, the other was skin and etc... Family still wanted him cremated so we had to collect all the body parts we could. ghostiekat

Not me, but my mom works for a doctor and one of their patients was telling her how his daughter died. She had problems with I think heroin or meth. Anyway, she was sober for a while but one night she didn't come home. Apparently her dad got the call that she overdosed. And I didn't know this was part of procedure or anything, but they took him to see her body, which was still where she died.

She was in a room, still sitting upright in a chair. Her eyes and mouth were wide open, seemingly frightened, her body was tense, and her arms were outstretched, as if trying to reach for something. I can't imagine being a parent and witnessing your child in that state, that must be so traumatizing. Also is it protocol to take a parent or loved one or whatever to the crime scene like that? I can see them coming to the morgue to identify the body but I had no idea can actually bring them to the spot like that. I don't know, either way it gave me the chills. iwannabebrittany

Worked maintenance at an apartment complex... got a call from the local police that there was a wellness check and they wanted us to go knock on the door/ check it out before they got there. Went to the door and knocked, no answer, I let myself in and the first thing that hit me was the smell... God I'll never forget that smell... I saw what appeared to be an obese African American woman on a recliner, the thing is the tenant was a thin 30 something white woman. Cops said she'd been dead for at least a week or two... I had to ready that apartment for their next tenant too. She was there so long there was a 3-4 foot spot on the carpet from where her bodily liquids seeped out... never going on a wellness check again. Sketchelder