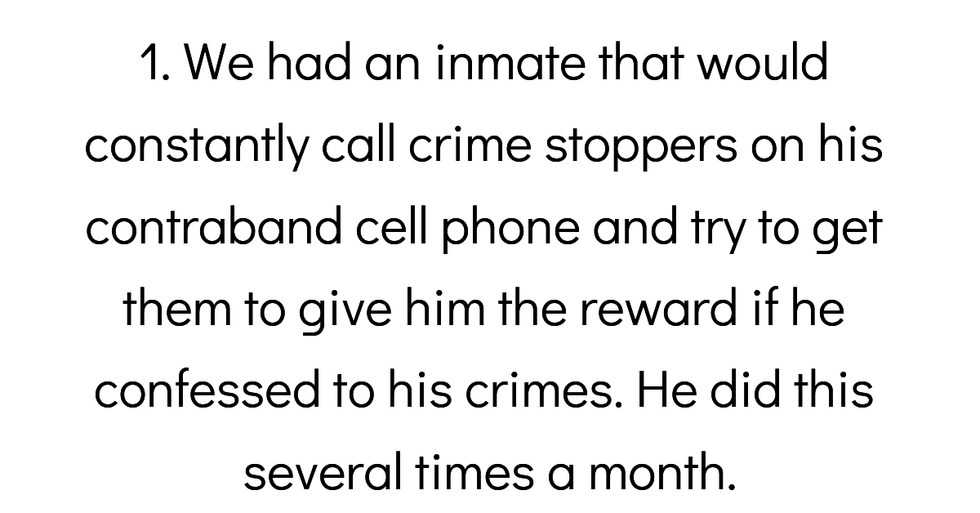 Police officers can run into all sorts of criminals over the course of their careers and not all of them are necessarily the sharpest knives in the drawer.

Today's burning question came from Redditor NobleDragon777, who asked the online community: "Cops of Reddit, what is the most stupid criminal you have ever met?"

There are a lot of them out there. Law enforcement officers and even regular citizens chimed in.

Not a cop but I used to work at a smoke shop. 3 guys broke in through a large window, left blood everywhere just trying to get in. Walked right past the high end fancy expensive glass and proceeded to grab as many cheap Chinese bongs as possible. They went back through the window breaking 2 or 3 bongs in the process of crawling through the tiny hole they made probably cutting themselves even more than they already have and high tailed it across the street.

They seemed to have dropped damn near everything while running because there was literally a trail of broken glass leading to the apartment across the street. Cops came, followed the glass trail leading directly to someones door. Looked over the little fence to their bottom floor balcony and saw 3 guys all cut up smoking from a broken bong. We estimated they took 8 or 9 bongs, they were smoking from the only survivor. They turned out to be regulars. Never seem em again after that.

Not a cop myself, but about 10 years ago I got held up and robbed by a group of 3 guys with knives. All they wanted was the money in my wallet, so me being the smart guy not wanting to mess with knives just obliged. At the end of the ordeal he put the knife to my throat and said "If you ever tell the cops my name is <redacted> I will slice your throat right now".

So I went home, called the cops, told em where it happened and gave them the name they guy told me. The name instantly rung a bell with them since the guy had come into contact with the police in the past. Cops went to the spot where I was robbed and they were laying in ambush for a new guy to appear. They could instantly identify the guy he was arrested and thats about it.

Happened in the Netherlands, don't know his sentence or anything.

Teen gets fired from Red Lobster, returns to rob same restaurant that night. They refuse to give him money from register so he grabs charity coin box (muscular dystrophy or similar) and then he leaves on bicycle. I go to find him and see coins scattered about, follow trail off same which leads me to him hiding in bushes at a church. Bicycle was leaning up against the bush he was in.

Went to a job of 2 males attempting to break into a car. Job description said they had been at it for at least an hour.

Got there and the car was theirs. They had apparently locked themselves out. Checks confirmed it did belong to one of the persons mum. On their person was stolen mail and heaps of phones and new stuff in boxes in the car so they got arrested for theft anyway.

Ended up that the drivers door they had been trying to break into was the only locked door out of the 4. Was unlocked everywhere else the whole time they were there.

My ex stole a car and went to pick up his friend at the police station in the stolen car. He parked right in front of a cop. The cop ran the plates and escorted him into the building. Next day, he was on the news as the most stupid criminal in town.

Took a vehicle burglary report where the victim found a drivers license sitting on her driver seat that the suspect must have left behind. Seems damning, but if he had any criminal smarts he would just say his license was stolen and the thief must have dropped it while breaking into this new victim's vehicle. Without any other evidence, the case would have gone nowhere.

The next day I take a report at a church that was a couple of blocks away from the vehicle burglary. This guy stole the video cameras from the building. He must have thought the footage came with the camera, because when we checked the video, there was a High Def close-up of the suspects face as he removed the camera. Good evidence, sure, but I still didn't know who the guy was... until I looked at the license I collected the day prior and saw it was the same exact guy.

My father is a police officer. He once told me a story of a call he went to for reports of a man and woman fighting in an apartment (call came from neighbors for noise complaints/concern). He was 3rd shift, so this was at some point very late at night, when all the crazy people are up and at em. When he arrived he could hear the yelling through the door, he knocked and let them know it was the police.

There was immediate silence and a man answered the door... completely naked. The naked man didn't even give my dad a chance to speak or ask questions, the first thing he said was "I don't have a knife behind my back." Well, he definitely did have a knife behind his back. And the naked woman he was with had drugs, which was what they were fighting over. They both got arrested that night. Tip: don't do illegal drugs, and if you do, don't answer the door for the cops.

"Social media is a treasure trove..."

Can't go into too much detail, but kid (14) shot another kid (15) in the leg after a fight in their apartment complex. The victim is able to describe the gun the shooter used in detail. We get get shooters name from another kid who knows him from school, my partner looks up his Instagram and would you believe it, there he is posing with the gun described to us exactly.

Social media is a treasure trove of wannabe gangsters incriminating themselves.

"So I'm sitting in the station, doing paperwork."

So I'm sitting in the station, doing paperwork. I'm looking out of the window, and a few yards away is a bus stop. A young lad is smashing the glass of the bus stop, as a way of showing off to a couple of girls. So I sigh, walk about 20 yards over to him and arrest him.

Another time, a lad had just broken into a pharmacy and stolen some drugs. Sleeping tablets, which he started taking (maybe to hide the evidence - who knows how these people's minds work). There's a foot chase, which gets slower, and slower, and slower... I ended up just walking slowly behind him. The guy fell asleep while I was booking him in.

My cousin is a State Trooper, and he had a funny story about a guy he caught running drugs on the interstate. One day as he was about to head off duty, he saw a car going easily 100mph in the opposite direction, so he whipped around and eventually caught up to him and pulled him over. The first words out of the guy's mouth were, "You can't pull me over!" To which my cousin replied, "Um, I just did?"

After a search of the vehicle that yielded a pound of weed, a pistol with the serial number scratched off, some meth, and a notebook with his own rap lyrics, my cousin arrested the guy. While questioning him, he read some of his lyrics back to him including the line, "Ain't no pig ever gon catch me... F--- the police"

"He basically gave himself away."

My dad is a cop and he was interrogating a robber which was denying he had any involvement since the start.

He basically gave himself away.

My dad is a cop, and I remember that he called me one night and said that he wanted to tell me how glad he was that I'm not as stupid as the guy he arrested that night. An idiot high schooler was caught stealing alcohol after his fake ID was rejected. His fake ID said he was born in 2001, three years younger than he actually was. Poor guy couldn't work out why his ID didn't work. My dad recommended that he pay better attention in math class.

I pulled over a dude for having a brake light out. Nothing serious, ran his plated and the likes. It all came back clean and nothing seemed off, until he exclaimed, "I haven't had any alcohol!" In an over enthusiastic tone.... for some reason he thought this was a good idea... so nearly got away with it (vodka doesnt smell). I breathalised him... legal limit in England is 35 he blew over 60.... Arrested on the spot and his vehicle towed. Idiot.

We had an inmate that would constantly call crime stoppers on his contraband cell phone and try to get them to give him the reward if he confessed to his crimes. He did this several times a month.

People Divulge Which Secret They Most Regret Sharing With Someone

Secrets are heavy. Holding a problem or discomfort inside seems to have its own extra dose of gravity. It feels lonely and usually, the best and only way to lighten that load is to get out.

We tell someone we trust the secret and we feel a little less lonely, and suddenly it doesn't all seem so heavy on our shoulders anymore.

People Explain Which Of Humanity's Accomplishments Still Blow Their Mind

These days, the deep flaws of humanity are on full display.

Look at the news for just a couple days and you'd concluded that inept leadership, chaotic conflict, disinformation efforts, and environmental violence would appear to be the primary indicators of humanity.

Keep reading... Show less
humans
You May Also Like
Trending

People Share Their Worst 'Man, They Don't Know Me At All' Gifting Experience

People Share Their Craziest 'F*** This, I'm Out' Experience