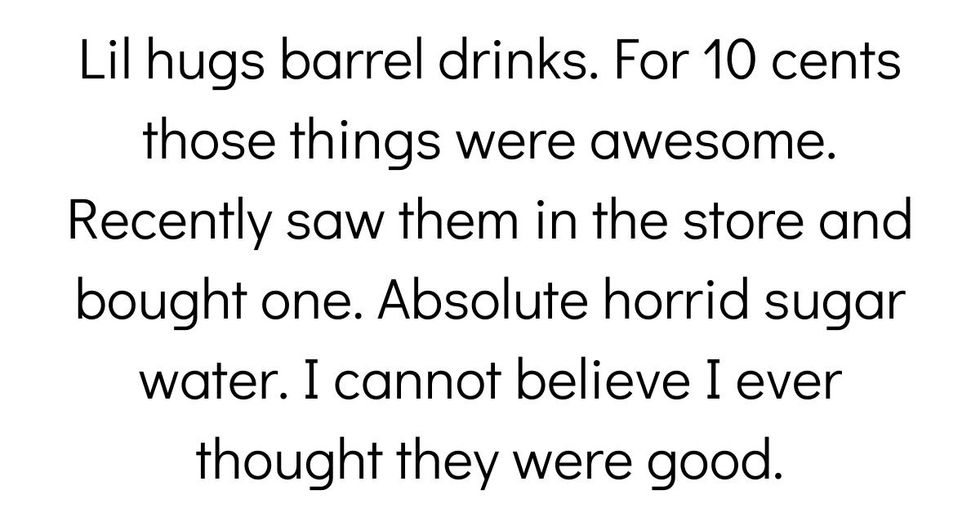 Growing up and losing childhood may be a big bummer but at least I'm not just the cheese powder in the Mac N Cheese packages anymore.

Kids are strange, almost otherworldly beings. They get wildly excited about weird, often near-meaningless things to the point that they're frantic and don't know what to do with their bodies. They cannot be trusted with anything heavy and can manage their emotions about as well as an opossum.

But there is some charm in remembering that weirdness. And even if we all were strange kids, the different forms of that strangeness are usually far and wide.

Even Drake in Degrassi??

Any TV show with a predominately teenage cast. So much bad acting that I'm amazed my parents could stand to let me watch them.

Full House. That was one horrifically bad show. I adored the shit out of it as a little kid.

I used to bake scrambled eggs for myself and pour a lot of fu**ing salt on it and I'd take a while to eat it but I'd always finish it. I grew out of it when I realized it tasted like sh!t and that's why it always took me so long to finish it

Best Drinks at the Block Party

Lil hugs barrel drinks. For 10 cents those things were awesome. Recently saw them in the store and bought one. Absolute horrid sugar water. I cannot believe I ever thought they were good.

Snow. I miss being a kid and waking up in the morning to see the aftermath of a massive snowstorm and just being excited to go outside and play in it. Now as an adult, not only do I not get snow days but I have to leave for work earlier than usual.

Eating entire sticks of butter. Don't ask me I don't know why I did it, but I did and they were delicious.

Better When My Neck Was All Cartilage

Sitting in the front row at a movie theater.

7 year-old me thought this was the greatest thing in the world.

Animal Planet use to air this show called Animal Face-Off back in 2004. The premise was that they would take two large beasts (like say a lion or a bear) and then stack up their weaponry and physical attributes against each other using special machines to mimick their power before playing a 3D simulation of the two animals fighting. My 7 year old self absolutely loved this show and I was always so hyped to see a new episode. Curiosity got the better of me many years later so I decided to look up the episodes online and my god was it awful. The results were often skewed out of favoritism (they admitted they made the lion beat the tiger because they liked it more), there were many inaccuracies (in Great white shark vs Saltwater crocodile the shark was able to keep fighting after having one of its fins bitten off and turned upisde down, both would have incapacitated and killed the creature in real life), and the animation was pure drivel with graphics that would make a PS1 game shake its head in shame. I was legitimately shocked as just how horrible that show was considering how much I loved it as a kid.

Good to Have Around for Nuclear Winter Though

Lived on it as a kid, which in hindsight says a lot about my parents. Tastes repulsive.

Lotta Band Aides In There