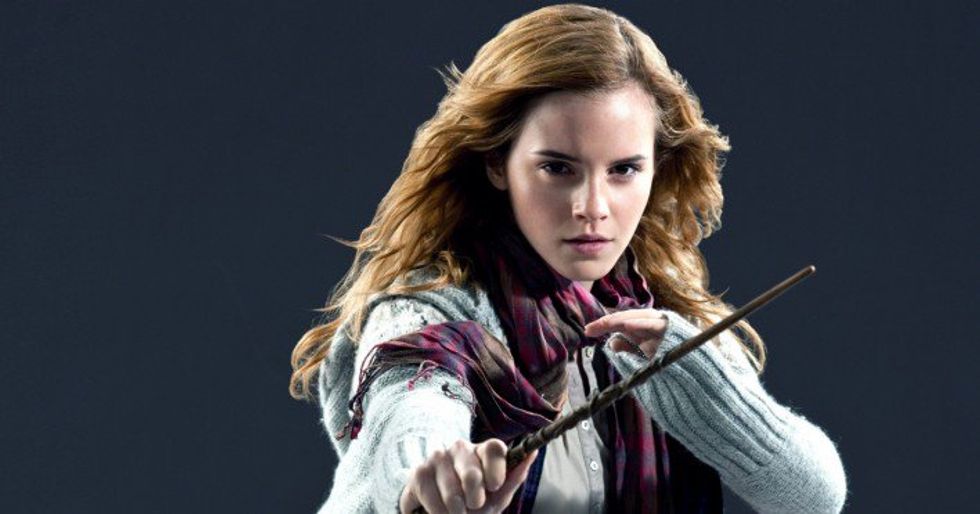 I think it's safe to say that most Harry Potter fans would love the series even more than they already do if they knew some behind-the-scenes stories. The best-selling franchise has been read in almost 70 countries and the movies have touched tens of millions of people. For those Potterheads missing Hogwarts and the whole cast, here are 30 awesome BTS stories for you. Enjoy!

3/30. Alan Rickman (Snape) and Michael Gambon (Dumbledore) pranked Daniel Radcliffe by placing a fart machine in his sleeping bag during the scene where all the Gryffindors sleep in the great hall. They held the remote and in between their lines they would press it. Eventually, all the kids started sitting up to interrupt the scene to say it wasnt me!

4/30. The cat that Filch is so attached to apparently wasn't above stealing from its make-believe owner. The cat once jumped up and stole David Bradley (Filch)'s sandwich.

5/30. Daniel Radcliffe was really rough with his wand. He would fiddle and play with it so much that it would break and its paint would chip. So the design team actually had to make close to 80 wands for him over the course of the series. He also went through more than 150 pairs of prop glasses.

6/30. While filming a scene for one of the first movies, young Rupert Grint drew what he described as a rather unpretty picture of Alan Rickman (Snape). He was worried he would get in trouble, but Alan Rickman actually got him to sign it after filming the scene and kept it as a prized possession.

7/30. Snapes robes are one of the only costumes that never changed throughout the series.

8/30. Alfonso Cuarn, who directed the Harry Potter and the Prisoner of Azkaban, asked the three main leads to write an autobiographical essay about their character, which had to be written in the first person, and needed to span from their birth to their discovery of the magical world. Of course, Emma Watson wrote a 16 page essay about her character, whilst Daniel Radcliffe also handed in a one page essay. Rupert Grint, however, refused to hand in an essay. When asked why not, he stated: Im Ron; Ron wouldnt do it, and so Alfonso replied, Okay, you do understand your character.

9/30. Helena Bonham-Carter, who played the unmerciful Bellatrix Lestrange, accidentally ruptured Matthew Lewiss eardrum during the filming of the fifth instalment, "Harry Potter and the Order of the Phoenix," when she stuck a prop wand in his ear during filming.

10/30. Most people were astounded by Matthew Lewiss transformation from hapless geek Neville, to handsome man once Harry Potter was over. What many fans dont know is that Matt actually wore a fat suit and fake teeth to make his character appear unattractive.

11/30. A pile of gold coins were placed on set on the very first day of filming for "Harry Potter and the Philosophers Stone" (or Sorcerers Stone for our overseas cousins). However, almost all the gold coins were stolen by the end of the day, as people had taken them as Harry Potter memorabilia.

12/30. As most Harry Potter fans will know, J.K. Rowling told Alan Rickman about Snapes story arc before he made his onscreen debut as the character. What many people do not know is that due to this knowledge, the actor would often argue with the directors about certain scenes and acting directions because he knew something they did not.

13/30. The director, Alfonso Cuarn, has a very thick Spanish accent. When he described the dementors as turing the rain around the Hogwarts Express to "ice," the visual effects team heard it as "eyes." They even drew eyes falling from the sky on their storyboards before Cuarn corrected them. Cuarn's contract also forbade him from cursing in front of the kids while on set.

14/30. During one take of Hermione's entrance to the Yule Ball, Emma Watson actually fell down and tripped on her fancy dress.

15/30. Alan Rickman forbade Rupert Grint (Ron) and Matthew Lewis (Neville) from being anywhere near his new BMW, as they had spilled their milkshakes in his old car during "The Goblet of Fire."

16/30. When Gary Oldman (who played Sirius Black) first met Daniel Radcliffe, he bought him a bass guitar, as he knew he had an intense passion for music.

17/30. Rupert Grint revealed that Dan said he could set fire to me and I wouldn't react. It actually happened. He was standing too close to a candle and his T-shirt went up in flames. Grint said I just started laughing.

18/30. While filming the "Prisoner of Azkaban," the pockets of Tom Feltons Hogwarts robes had to be sewn shut to stop him sneaking food on set.

19/30. The producers tried to give Daniel Radcliffe green eyes and Hermione buck teeth like in the books, but failed. Sadly, Daniel had a terrible allergic reaction to his green contact lenses and had to stop wearing them, while Emma Watson couldn't speak clearly wearing her false buck teeth.

20/30. Rupert Grint has an actual severe case of arachnophobia. So a lot of his reactions in the 2nd movie when he was around the spiders and Aragog were totally genuine.

21/30. An outbreak of lice occurred among the children cast members during the filming of Harry Potter and the Chamber of Secrets. It was so bad that filming actually had to be temporarily delayed.

22/30. Emma Watson would regularly bring her pet hamster Millie to set. When Millie sadly died soon after the start of shooting, the set department created a coffin lined with velvet for Millie.

23/30. When the Triwizard Tournament contestants enter the maze for the final challenge, some actors who were playing the girls from Beauxbaton were dancing the Macarena in the stands as a joke. But it was left in the final version of the film.

24/30. The filming of the scene in which there are "Seven Harrys" was so incredibly complicated that Daniel Radcliffe counted over 90 takes for a single shot.

25/30. The radishes hanging from Luna Lovegood's ears were actually made by Evanna Lynch, the actress who portrayed her.

26/30. The prop department had to make 40 versions of Slytherin's locket for Daniel Radcliffe and Rupert Grint to destroy them for just one scene.

27/30. Someone who worked in the art department used to bring their dog to work and keep it under the desk. When the animators saw him, they based Dobbys ears on the dog.

28/30. During the filming of the kissing scene between the horcrux versions of Harry and Hermione in the final film, Rupert Grint was kicked off of the set for laughing too much.

29/30. The crew bought baby ostriches to sit in the baskets at Hagrids hut, but by the time they came they were too big to fit there. They kept them in the zoo that they had at the studios instead.

30/30. While the rest of the cast got three weeks of dancing practice, Daniel was only able to get in four days because he had a much heavier filming schedule. For this reason, they mainly used shots of Harry dancing from the waist up to avoid showing his stumbling feet.

SHARE these behind-the-scenes stories with a Potterhead you know!