30 Hilarious Facts You Haven't Heard About Bridesmaids. These Are Great. 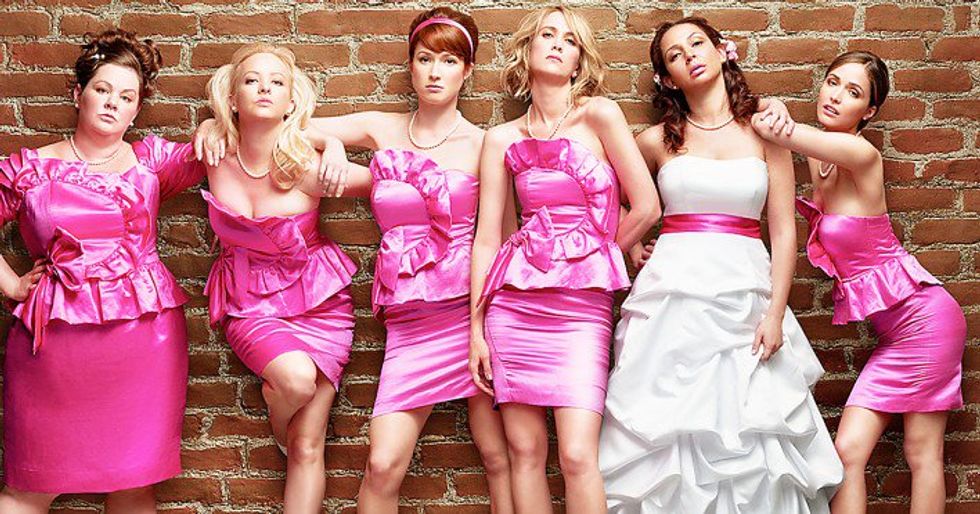 "Bridesmaids" was one of the first movies that started the charge of full-female cast raunchy comedies. Its humour was both subtle and very over the top at times, and it appealed to a large audience with its satirical, hilarious approach to weddings and the dynamics of friend groups. While only a few years old, it is still an absolute favourite of comedy fans. Here are 30 hilarious facts you never knew about "Bridesmaids." Enjoy!

3/30. Annie's photograph of herself and Lillian was made from real childhood pictures of Kristen Wiig and Maya Rudolph, with their heads merged onto other bodies.

4/30. Rebel Wilson and Matt Lucas became roommates in real life. In 2012, they told Us Weekly that they were inspired by their roommate roles in Bridesmaids and decided to move in together. While living together, the two received complaints from neighbours for singing "Annie" showtunes too loudly.

5/30. The scene where all the ladies meet at the engagement party is mostly improvised. Wendi McLendon-Covey, who plays Rita, has said all of the scenes were filmed scripted, but some allowed the ladies to show their improv skills. Kristen Wiig has added that director Paul Feig told them before shooting the scene to just talk.

6/30. Jon Hamm is not listed in the films credits. It was decided that listing his name in the credits might make audiences think it was a more serious film, since Hamm is known more for his dramatic roles.

7/30. Chris ODowds character was originally supposed to have an American accent. Everyone was so entranced by his native accent that they decided to change that detail just for him.

8/30. Rose Byrne had to learn Thai for her engagement party speech. During an improv session for the scene, she pretended to speak Thai, and the producers loved it. When they later found out that she was just making up words, they made her learn the actual phonetics of some Thai words before she included it in the film.

9/30. The engagement party scene was filmed at the location used as Wayne Manor in the Batman television series. And it was just as majestic in "Bridesmaids."

10/30. Melissa McCarthy says she based her character on Guy Fieri. She said he was the first person she thought of when she saw the script: I wanted to do the shirt Every scene I would have my glasses on the back of my head.

11/30. Jon Hamm used to be a high school drama teacher. He taught at John Burroughs School in Missouri, and Ellie Kemper (Becca) was one of his students.

12/30. In the second bedroom scene between Annie and Ted, Annie tells Ted that she will take the fictional "George Glass" to Lillian's wedding instead of him. "George Glass" was also the name of Jan Brady's fictional boyfriend on The Brady Bunch.

13/30. Kristen Wiig and Annie Mumolo said writing the script took several years. They began writing it in 2006 (the film was released in 2011). Munolo said they spent most of the time getting into the heads of each of the characters, based on experiences they both have had in their lives.

14/30. Helen's stepdaughter was played by Paul Feig's real life neighbour (Molly Buffington) and the cake-munching raccoons are the director's own pets, "Sonny" and "Cher."

15/30. When Feig asked actress, Wendi McLendon-Covey (Rita) if she had any babysitting stories, she answered that she had once caught a kid sh****** on a shag rug and trying to shovel it into the kitchen trash.

16/30. Melissa McCarthy and Ben Falcone are married in real life. They got married in 2005, and she says hes the nicest in the world.

17/30. The engagement party scene was inspired by an actual experience had by co-writer Annie Mumolo. Mumolo, who plays the anxiety-filled woman sitting next to Annie during the plane scene, said, My friends engagement party was at this beautiful country club. My car had both rearview mirrors duct-taped on. I remember sitting there thinking that this was this great divide between where I was headed and where my friend was headed.

18/30. All Vegas scenes were removed from the film because of "The Hangover." Producer Judd Apatow said that The Hangover did Vegas just as well as any film was going to do it, although before the film was even released, critics were calling it The Hangover for girls.

19/30. The film wasnt originally supposed to be about a wedding. Wiig has said in earlier stages of the script, there wasnt a wedding in it at all: We just wanted to write a fun script where our friends would come in and play and write something that had a lot of women in it.

20/30. Kristen Wiig and Chris ODowd bonded over several rounds of 'would you rather?' while on set. In an interview, ODowd said there was so much improv necessary for their scenes together that the two decided to play the game. One of the rounds included, Would you rather have a nipple growing on the end of your nose or a tooth growing out of your cheek?

21/30. The teenager who gets Annie fired is played by Peter Framptons daughter. The rockers daughter (now 18 years old) was also in this years Tammy.

22/30. "Bridesmaids" was Jill Clayburghs last film. The talented actress, who plays Annies hilarious mom, passed away the year before the film's release, and several of her dirty joke scenes were cut from the film, to better preserve her memory.

24/30. Maya Rudolph was pregnant with her third child during the filming of this movie. Most of the clothes she wore had a belt on them to distract from her stomach.

25/30. Paul Rudd appears in a deleted scene as Dave who briefly dates Annie. However, his role is uncredited but the scene is shown in the deleted scenes section of the bonus features on the DVD.

26/30. In the DVD commentary Kristen Wiig made it a point to say that the audience was not seeing her own hands during the baking (and many other close-up) shots. Because she was so busy, a hand stand-in was used for several scenes.

27/30. The exterior of Teds house is the same one used to show Kelly Taylors house in Beverly Hills, 90210.

29/30. To date, this is the most financially successful Judd Apatow production.

30/30. The cast spent about two weeks improvising with each other during rehearsals, some of which was incorporated into the movie.

SHARE these facts with a Bridesmaids fan you know!